Home NEWS Yolanda Hadid steps out along with her beau Joseph Jingoli for a...
NEWS

She formerly starred on the hit Bravo series Real Housewives Of Beverly Hills.

And on Monday, which also happened to be her 57th birthday, Yolanda Hadid was seen taking a post-shopping walk through the bustling streets of New York City.

Her boyfriend of two years, Joseph Jingoli, accompanied her through her inner-city trek, and the two were seen holding hands for much of their time together. 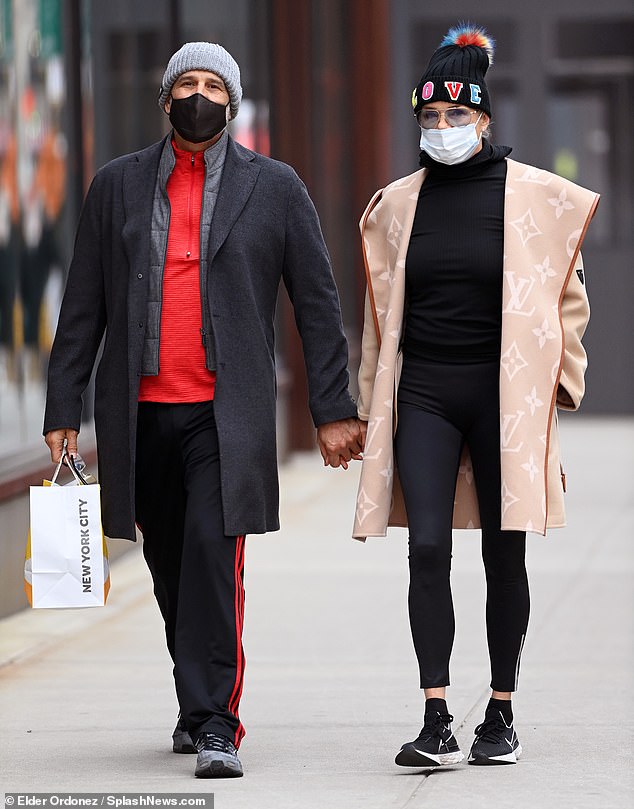 Time for two: Yolanda Hadid was seen taking a walk with her boyfriend Joseph Jingoli through the streets of New York City on Monday, which also happened to be her 57th birthday

The 57-year-old former model was seen wearing a Louis Vuitton draped jacket on top of a black turtleneck sweater to stay cozy in the midst of the freezing New York City winter weather.

Hadid matched her top with a set of black athletic leggings and a pair of athletic shoes; she also wore a beanie to keep her head nice and comfortable.

The reality television personality kept her typically flowing blonde hair tied up for her time outside with her boyfriend and wore a pair of light blue-tinted sunglasses. 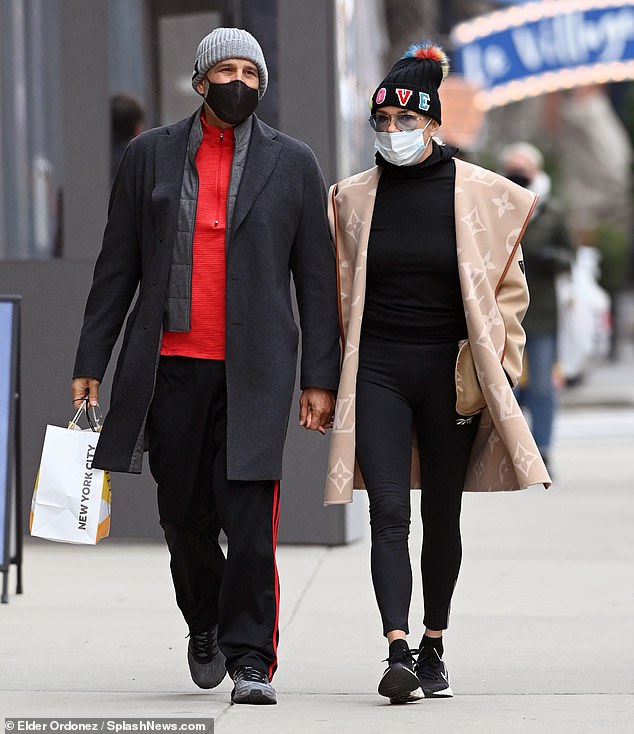 Happy couple: The former Real Housewives Of Beverly Hills cast member was seen holding hands with her beau, who reportedly first met Hadid when he rang the doorbell of her Pennsylvania farm 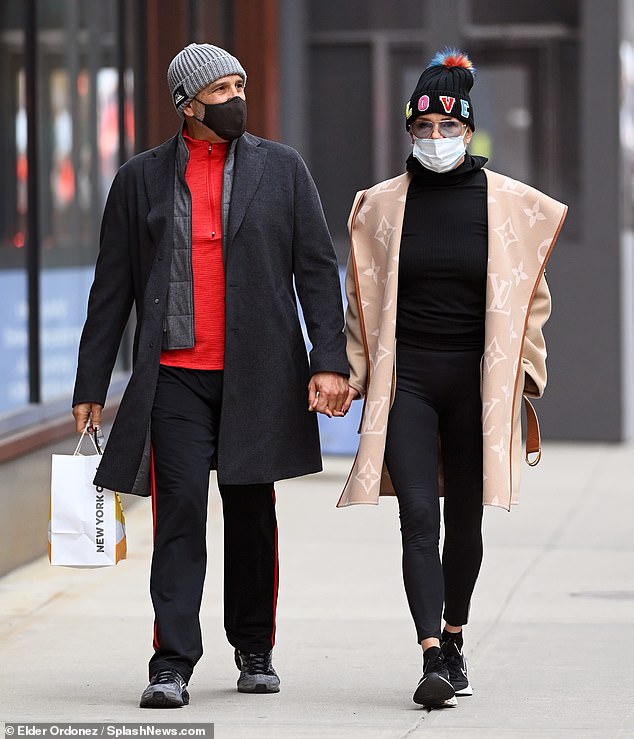 Staying protected: The reality television star and her boyfriend both wore face masks during their walk in order to stay protected in the midst of the coronavirus pandemic

He paired his top choices with a set of striped athletic pants and a pair of running shoes in addition to wearing a thick grey Quiksilver beanie to keep his head warm.

The two both wore face masks to keep themselves protected from potentially contracting COVID-19, although Hadid removed her mask at one point to smile for the cameras.

The media personality also reportedly received a delivery of a bouquet of flowers that had been sent to her apartment.

Later that day, Hadid took to her Instagram account to share a duo of photos, with the first showing her holding her first grandchild juxtaposed with a old snap that featured her kissing her mother.

The reality television star also wrote a lengthy message in the caption for the photos regarding how she came to understand the strong feelings that her own mother had for her own children. 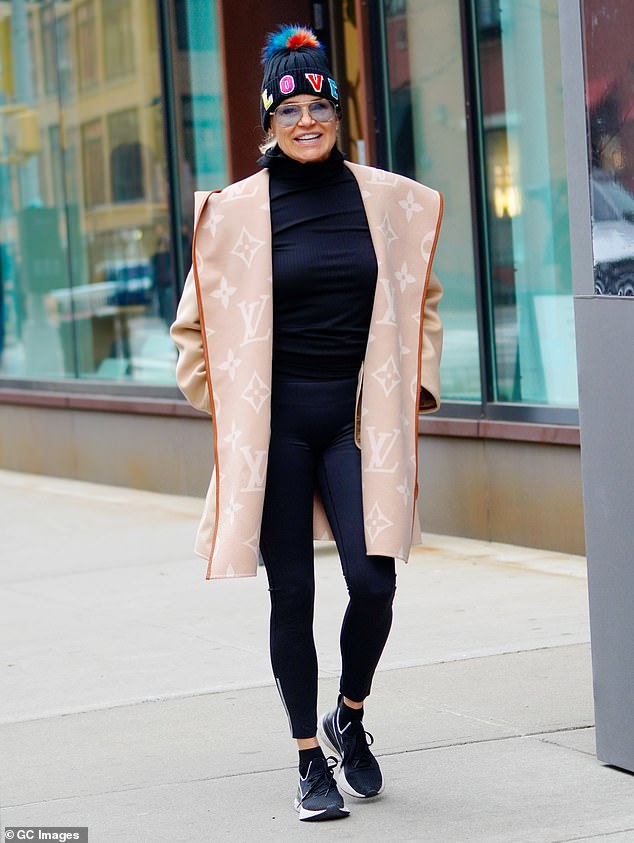 All smiles! At one point during her trip, Hadid removed her mask to flash a smile to the cameras 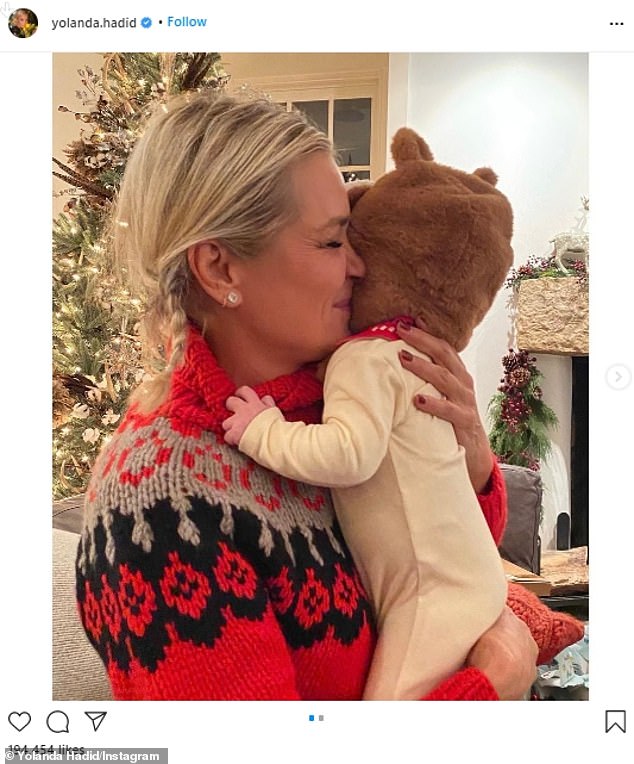 She partially wrote: ‘When I woke up this morning and counted all my blessings in life this little Angel was ranked #1, It’s a whole new feeling, I’m feeling… a part of my heart I didn’t know existed……’

‘I very much miss my mamma on this special day that used to be ours, the fist call of my day, 2 woman reminiscing about life and what this day was like in 1964,’ Hadid continued.

The media personality then went on to state how grateful she was that her mother was involved in both her own life and the lives of her three children.

‘I always knew she was crazy for her grand kids but this is the first time I truly understand the depth of how much she loved my children and how blessed they were to have her influence in their lives,’ said the former model.

Hadid finished her message with a blunt proclamation, writing: ‘God bless my mamma in heaven! Today is for you… #CircleOfLife.’ 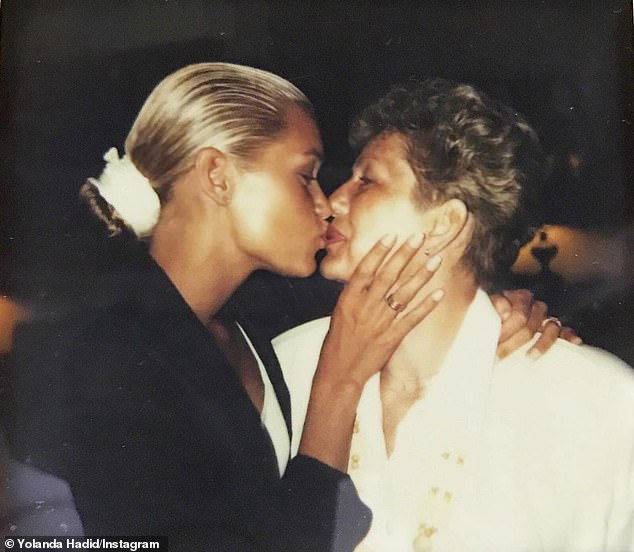 Looking back: Hadid also wrote about how she had come to understand the love that her own mother had for her grandchildren and thanked her for her guidance