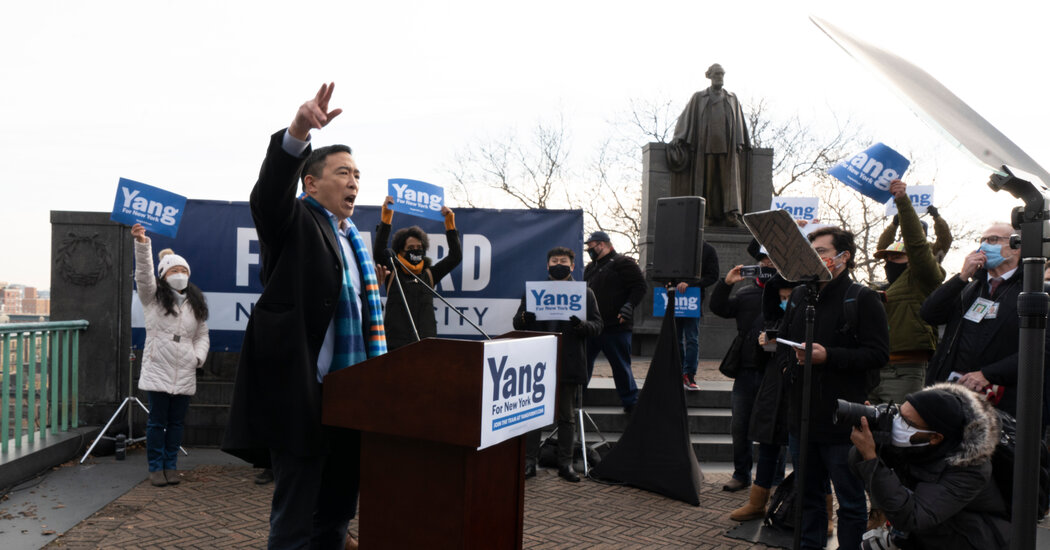 Mr. Yang quit the presidential race in February after failing to gain ground in the New Hampshire primary, but he succeeded in making himself a political celebrity — and casting a klieg light on universal basic income. In various forms, the concept has been implemented in small pilot programs around the country, one of which his nonprofit organization, Humanity Forward, is helping to fund in the Columbia County city of Hudson, N.Y.

The general idea of a guaranteed income goes back centuries. Martin Luther King Jr. was a prominent, and early, proponent of the idea in the 20th century, and his son, Martin Luther King III, has continued pushing for it in his father’s stead.

“It’s really immoral for us to have people living on the streets in the United States,” said Mr. King, the co-chair of Mr. Yang’s campaign.

A new group, Mayors for a Guaranteed Income, is pushing for a federal guaranteed income and counts more than two dozen mayors as members, including Ras Baraka of Newark, N.J., Eric Garcetti of Los Angeles and Keisha Lance Bottoms of Atlanta.

By Ms. Foster’s count, there are more than 10 pieces of legislation in Congress that would guarantee an income for families until the current economic crisis is over.

“And that is political warp speed,” she said.

One of the most prominent universal basic income pilots in the United States — the first program spearheaded by a mayor — is now wrapping up in Stockton, Calif. Since February 2019, the privately funded program has given 125 Stockton residents $500 a month. Recipients like Tomas Vargas Jr. will receive their last payments on Jan. 15.

Before he joined the program, Mr. Vargas was working as a U.P.S. supervisor. The monthly checks gave him enough financial security and confidence to start looking for a better job. Now he works as a case manager at a Stockton nonprofit. Instead of living paycheck to paycheck and constantly looking for additional ways to make ends meet, he has time to read stories to his young children at bedtime.

The no-strings-attached approach is “the beauty” of the program, he said. “It treats you like a human.”