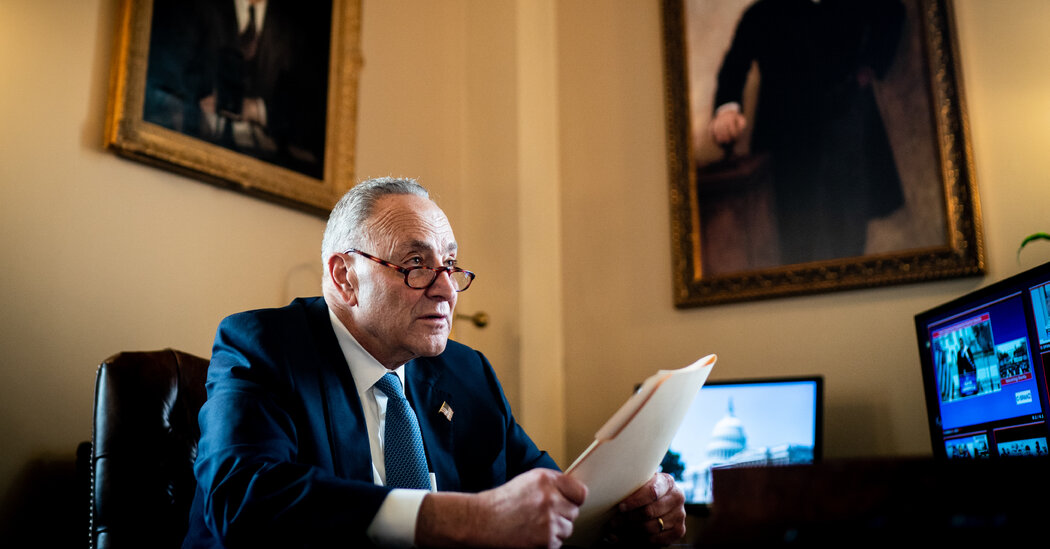 There has never been a Senate majority leader from New York, let alone one from Brooklyn.

But after Democrats claimed razor-thin wins in a pair of Georgia runoffs, Senator Chuck Schumer will soon be taking charge of the legislative agenda in Washington’s upper chamber, and — by extension — place New York in line to reap the benefits.

The state, in theory, should have already been in that position, but President Trump rarely adopted stances that benefited his former home state. That is expected to change with Mr. Schumer, with Democrats across New York thrilled to have a direct line to a man in charge of vitally needed federal aid and other assistance.

“It is a bright sunny day in the State of New York,” Gov. Andrew M. Cuomo said in Albany on Wednesday morning. “The metaphorical sun is shining.”

Mr. Schumer’s looming ascension was overshadowed when pro-Trump supporters stormed the Capitol in Washington, leaving the senator to deal with the fallout from the outgoing president rather than the promise of his successor.

How much can a Senate majority leader do for his home state?

A lot. There is a long bipartisan tradition of majority leaders helping their home states out, whether it be through direct funding of projects, such as water plants in Mississippi, under the leadership of Trent Lott, a Republican, or more recently, the advocacy of Harry Reid, a Democrat, to sell off public lands and allow Nevada to use the profits for improvements.

In Washington, Senator Mitch McConnell, a Republican, is primarily known for his uncanny ability to keep his conference in line and on schedule, delivering major victories for Mr. Trump on tax reform, the confirmation of three Supreme Court justices, and, of course, the president’s acquittal on impeachment charges last year.

But the outgoing majority leader was also known for bringing money to his home state of Kentucky, which regularly ranks as one of the top “taker states” in the nation — meaning that it receives far more federal assistance than it provides in tax revenue.

In late 2019, Mr. McConnell claimed to have brought $1 billion to Kentucky as part of two end-of-year spending bills, with money for everything from a veterans hospital in Louisville to a “forage animal production lab” devoted to horses and cattle at the University of Kentucky.

Mr. Schumer, a diligent practitioner of old-fashioned politics, seems perfectly suited to carry on this tradition. He makes a habit of traveling to all of the state’s 62 counties every year and announcing ample servings of pork: $8 million for a Cornell lab, $81.5 million for the Rochester Institute of Technology, $14 million for Covid-19 efforts. And that was just since New Year’s Day.

“I always fight for New York and always have,” Mr. Schumer said in an interview on Thursday evening. “It’s just in my bones.”

The election was in Georgia, but Albany had a very good night.

With billions of dollars in budget deficits, Mr. Cuomo has been verbally battling for months with Mr. McConnell, who had suggested that he was not interested in offering a “blue state bailout.”

Now, with Democrats in charge in Washington, those bailouts should be much easier to arrange, including the all-important issue of direct state and local aid, which was left out of the recent stimulus package. How much aid that will be remains to be seen, but in Albany, anything will help.

The state could also get some relief from a personal bugbear of Mr. Cuomo’s: the cap on the federal deduction on state and local income taxes, which was passed as part of Mr. Trump’s 2017 tax reform bill. New York has some of the highest property tax rates in the country, and the cap limited how much could be written off.

Mr. Cuomo has railed against the “S.A.L.T. cap” so often that it has become something of a running joke among the reporters who cover him, but Mr. Schumer has been equally opposed, saying that he wants it “dead, gone and buried.”

He echoed that on Thursday, calling it a “nasty provision in the tax bill,” and calling its repeal “a very high priority.”

Coupled with the victory of President-elect Joseph Biden, Mr. Schumer’s ascension may signal both new influence for New York on the national stage, as well as a new dynamic in the state’s internal power structure.

Mr. Biden, for instance, is known to be friendly with Mr. Cuomo, though the relationship between the governor and Mr. Schumer is more fraught. Mr. Cuomo, a third-term Democrat now in his 11th year in office, has long been the most powerful leader in the state; Mr. Schumer may now lay claim to that title.

Whatever the ranking, the rivalry periodically flares up, including earlier this year, when Mr. Cuomo — at the height of the first wave of the coronavirus surge in the state — took swipes at Mr. Schumer for what he felt was lackluster federal support.

“It would be nice if he passed a piece of legislation that actually helped the State of New York,” the governor told reporters during one of his many Red Room news conferences.

Mr. Schumer, a centrist like Mr. Cuomo, dismissed the governor’s critiques, reeling off support he’d brought home for small businesses, unemployed people, mass transit and hospitals. “Is it going to balance all of Cuomo’s budget? No. It’ll balance more than half of it,” Mr. Schumer said.

On Wednesday, however, Mr. Cuomo congratulated Mr. Schumer, saying it “bodes well,” before outlining a series of things he’d like the new Congress to do. He suggested that the Senate had treated the state poorly over the last four years and could now “make it right.”

The M.T.A. may breathe a lot easier.

For anyone who uses trains, subways or buses in New York, a Schumer-led Senate could be a godsend.

In late December, the Metropolitan Transportation Authority received $4 billion as part of the stimulus deal to cover the agency’s shortfall through the end of 2021. But the M.T.A. still faces a nearly $8 billion deficit from 2022 through 2024, and transit officials have proposed slashing service to make up for that shortfall.

Mr. Schumer’s new role — and additional federal funding — may stave off those cuts, as well as restart the agency’s $54 billion plan for badly needed upgrades to the ancient system.

“Having him as leader of the chamber would be a benefit to the millions and millions of people in New York and across the country who rely on mass transportation,” said Patrick J. Foye, the M.T.A. chairman.

The Biden administration is also expected to push forward New York’s congestion pricing scheme to charge drivers for entering the busiest parts of Manhattan, which is awaiting guidance from federal authorities on the environmental review process required for the plan to move forward. That plan is expected to generate $1 billion annually that will contribute to upgrades to the system.

Another check from D.C. seems likely, too.

On Wednesday, before the mob descended on the Capitol, Mr. Schumer — anticipating the wins in Georgia — said that he intended to pursue more direct payments to Americans.

“One of the first things that I want to do when our new senators are seated, is deliver the $2,000 checks,” Mr. Schumer said.

On this point, amazingly, he was in alignment with Mr. Trump, who had stalled signing the December stimulus bill in hopes of getting bigger payments included. (The bill included $600 checks.)

Mr. Schumer has expressed support for decriminalizing marijuana on a federal level, saying his thinking had evolved over the years.

In this, Mr. Schumer could be running on a parallel track with Mr. Cuomo, who said on Wednesday that he would propose legalizing marijuana for recreational use in New York.

Mr. Schumer and Mr. Cuomo will also find common ground on major transportation infrastructure projects, including the Gateway Project to fix the deteriorating rail tunnels under the Hudson River, which are expected to move forward under the Biden administration after languishing for years under Mr. Trump.

“It could be the most important four years for New York’s transit system that ever existed,” said Nick Sifuentes, the executive director of Tri-State Transportation Campaign, an advocacy group.

Mr. Schumer will also be overseeing the Senate’s unique power to confirm federal judges and Supreme Court justices. Mr. McConnell filled three Supreme Court seats and hundreds of vacancies in the federal judiciary, and only a few dozen remain open. Still, Mr. Schumer is promising “many more progressive judges,” as well as “creating much more diversity on the bench.”

The Georgia elections may have saved Schumer from a serious primary challenge.

Mr. Schumer, 70, is up for re-election in 2022, and speculation has been swirling that he could face a serious primary challenge, perhaps even from Representative Alexandria Ocasio-Cortez, the party’s progressive star.

The precedent is certainly there for a viable challenge from the left; Ms. Ocasio-Cortez stunned the political world in June 2018 by defeating Joseph Crowley, then the No. 4 House Democrat. Last year saw another shocker, with the defeat of Eliot L. Engel, the chairman of the House Foreign Affairs Committee, by a charismatic progressive challenger, Jamaal Bowman.

Despite all the seeming momentum from the progressive end of the Democratic Party, Mr. Schumer’s new role might tamp down the enthusiasm for such a campaign, particularly if he is able to save New York’s finances by bringing a major bailout to the state.

“He will be in a position to bring significant sums of money at a time when the state and the city need it,” said Hank Sheinkopf, a veteran Democratic political consultant, adding, “Money is what’s going to talk in the next couple years in New York.”