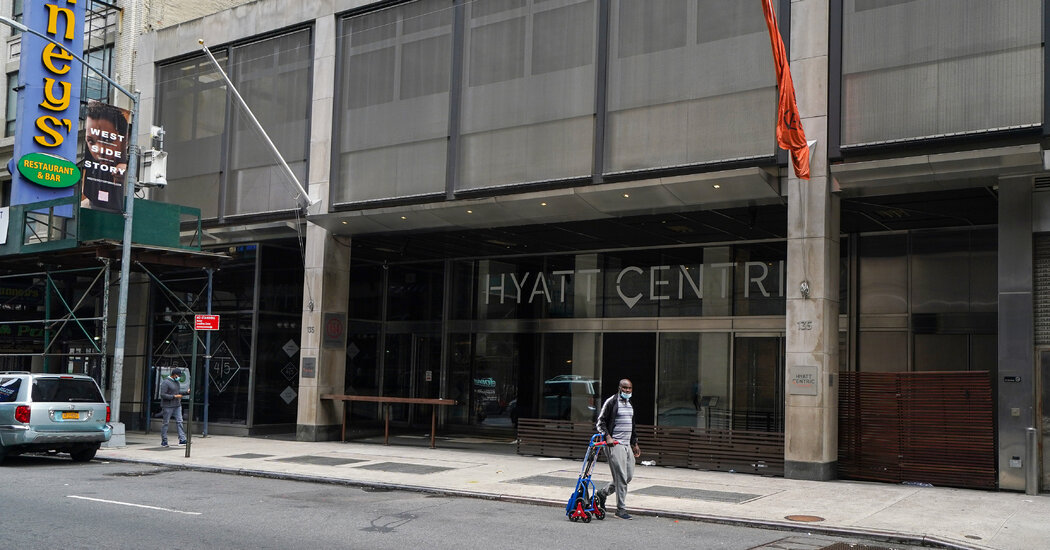 As New York City officials fight to control the coronavirus by this summer, it is becoming clear that the economic fallout will last far longer: The city’s property tax revenues are projected to decline by $2.5 billion next year, the largest such drop in at least three decades.

The anticipated shortfall, which Mayor Bill de Blasio is expected to announce on Thursday, appears to be largely driven by a projected drop in the value of office buildings and hotel properties, which have all but emptied out since the pandemic began, according to several people briefed on the new budget numbers.

Roughly half of the city’s tax revenue comes from real estate, and the economic projections suggest the city’s budget will remain in a precarious position for the foreseeable future.

The city will partially offset the loss with increased revenues from income taxes: The “rich got richer,” according to a slide from the mayor’s upcoming presentation acquired by The New York Times.

But the city will still likely have to substantially cut spending elsewhere.

“This latest development shows we need a true federal stimulus with direct local aid now more than ever,” said Bill Neidhardt, a spokesman for the mayor. “And that’s saying something.”

Mr. de Blasio and Gov. Andrew M. Cuomo, who have battled with the Trump administration for more federal aid, have expressed optimism that President-elect Joseph R. Biden Jr., together with a Democratic-led Congress, will bring substantial assistance.

Indeed, just before Mr. de Blasio’s expected announcement, the incoming Senate majority leader, Chuck Schumer, said that he and Mr. Biden had reached a deal for the federal government to cover the full costs of state and city expenses related to a disaster declaration from last March, when the virus was first discovered in New York.

The move is expected to save the state and city about $2 billion, money that Mr. Schumer’s office said can be used to “tackle Covid-related budget gaps.”

And on Thursday, Mr. Schumer was promising more to come.

“This is just prelude of better days ahead out of Washington for New York,” he said. “With Biden as president and me as majority leader, it’s going to get better.”

Still, few expect the federal government to be able to fully meet the budgetary needs of state and local governments.

In November, the city projected that the budget for the next fiscal year, which starts in July, would include $31.8 billion in property tax revenue.

On Thursday, the city is expected to recalibrate those expectations by $2.5 billion.

“It is unprecedented,” said Jennifer Freeman, the spokeswoman for the state comptroller’s office. “We don’t have anything on record that is larger.”

(According to City Hall, it’s difficult to compare today’s property tax system with any period before the 1980s, when it was conceived.)

Even if normal economic activity resumes in New York City, it will not necessarily result in the full-scale return of office workers to office buildings, now that so many have become acclimated to working from home.

In late November, only 35 percent of Manhattan hotel rooms were occupied, according to STR, a firm that tracks the hospitality industry, compared with 80 percent the year prior. More than 90 hotels had closed, at least temporarily.

The Manhattan retail sector, which was getting battered by e-commerce before the pandemic set in, continues to suffer, too, with rents declining and vacant storefronts increasing.

In 2020, tenants leased just 20.5 million square feet of office space in Manhattan, the lowest level in at least 20 years, according to a recent report from Savills, a real estate services firm.

It “will still be several quarters before workers return to the office in earnest and the full implication of demand shifts due to work-from-home or new location strategies can be seen,” notes the recent Savills report.

NEW YORK: President Joe Biden pledged to “do more” to address gun violence and implored Congress to act after a mass shooting in...
Read more