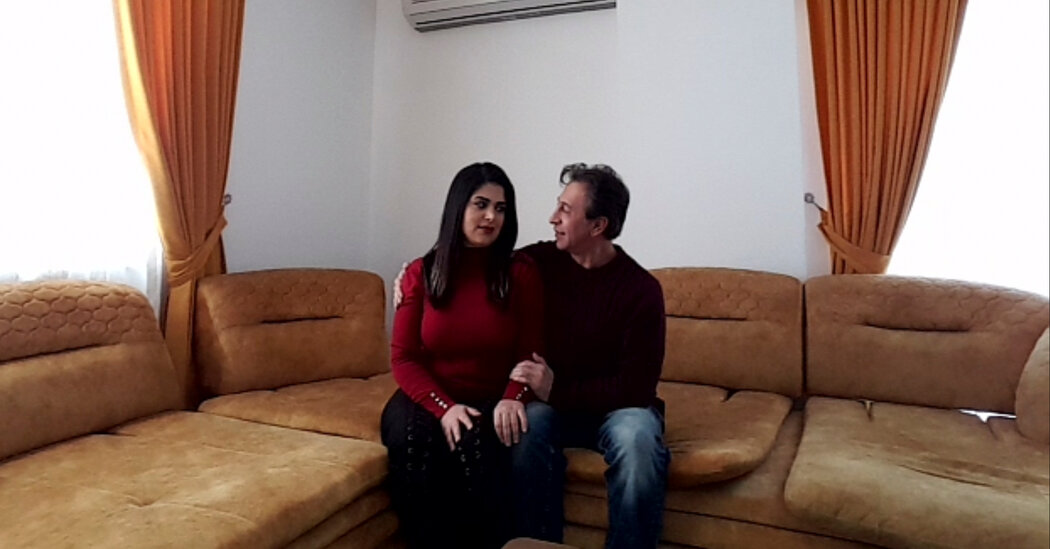 ISTANBUL — He is American, she is Iranian and they live together in a small seaside town in Turkey. Yet what they hoped would be an idyll has become a living nightmare.

Fatemeh Khoshro said her phone buzzed constantly with threatening messages, and that she and her fiancé, Nicolas Aryan, are harassed by men they believe are agents of Iran’s government. Their fears have been heightened by a kidnapping and a murder of Iranian dissidents in Turkey in recent months.

“We are really afraid,” said Ms. Khoshro, who fled Iran after she was imprisoned and beaten for taking part in a street protest against rising fuel prices. “We just go to the nearest supermarket and come back. There are some men who cover their faces and come into the building and bang on our door.”

Turkey has for decades been the first refuge for many Iranians who either cross the border illegally or use the no-visa policy for visitors.

Thousands have arrived as refugees since a crackdown against democracy protests in 2009. The United Nations refugee organization had registered nearly 40,000 Iranians seeking international protection in Turkey by 2017. Since then, the Turkish government has taken over registration of international migrants; it reported that 1,425 Iranians sought protection in Turkey last year.

In recent months, some Iranian dissidents appear to have been targeted by the Iranian government.

A prominent Iranian opposition figure, Habib Chaab, was abducted and forcibly repatriated from Turkey to Iran in October, a senior Turkish official said last week. Investigators concluded that he was lured from his home in Sweden to Turkey by Iranian intelligence agents, and then drugged and smuggled across the border by a drug-trafficking group, the official said, speaking anonymously according to official protocol.

Another activist, Arsalan Rezaei, was stabbed to death in Istanbul in December. Although it remains unclear who was behind his murder, activists who knew him say he was receiving threats from agents of the Iranian government.

Activists are particularly concerned about what might happen to dissidents being taken back to Iran. Ruhollah Zam, who ran a popular opposition social media channel from exile in France, was lured to Iraq, where he was abducted and returned to Iran. He was executed by hanging last month.

Alireza Miryousefi, minister and head of the media office at the Iranian mission to the United Nations, described as “preposterous” the idea that Iranians were scared of their own government.

“Iranians — wherever they are in the world — love their homeland and the overwhelming majority of them are on good terms with their government,” he wrote in an emailed statement. He said allegations of extrajudicial killings were unfounded but that Iran did request extradition of people who had been found guilty by an Iranian court.

He did not confirm or deny whether Iran had played a role in the abduction of Mr. Chaab.

Turkey, which under President Recep Tayyip Erdogan has sought to maintain good relations with Tehran, has an extradition agreement with Iran and has generally deported Iranians who have crossed the border illegally or do not have residency permits.

There are signs, nevertheless, that Turkey is acting with more circumspection since Mr. Chaab was abducted and since women’s groups in Turkey have mounted social media campaigns in support of Iranian activists, said Levent Piskin, a Turkish lawyer who represents Ms. Khoshro and several other Iranians who fled the country recently.

“They are trying to be more gentle, more caring,” he said, describing the Turkish government’s reaction to the women’s groups’ campaigns. “It is not a policy shift but they have to be more careful.”

The fate of an Iranian journalist who was arrested in eastern Turkey on Jan. 18 after illegally crossing the border from Iran to avoid imprisonment was a case in point.

The New York-based Committee to Protect Journalists has called on Turkey not to deport the journalist, Mohammad Mosaed. In November, he had been awarded the organization’s International Press Freedom Award; he fled his country after receiving orders to go to prison.

A senior Turkish official confirmed that Mr. Mosaed had been detained and hospitalized because of poor health. Mr. Mosaed identified himself as a journalist and applied for international protection, the official said, ruling out his deportation.

“Turkey, in line with her international obligations, strictly complies with the principle of non-refoulement,” Hami Aksoy, a Turkish foreign ministry spokesman, said in a statement when asked for comment, referring to the repatriation of people to countries where they might face persecution.

Despite Turkey’s assurances, Iranian activists and dissidents in the country say they are worried about their future.

Somayeh Ramoz, 38, an activist who is also represented by Mr. Piskin, is in hiding in Turkey after she said she received threats from Iranian intelligence agents. A hairdresser from the southern town of Abadan, she was part of an underground group supporting a return of a constitutional monarchy in Iran that organized protests in 2017. She escaped to Turkey three months ago.

In Iran, she was detained last year for three months and beaten so badly under interrogation that she sustained an injury to her liver, her lawyer confirmed. Then, she said, a guard sexually assaulted her. “Day and night I have nightmares about that,” she said. “I wake up screaming on my own.”

She was released on bail on July 31, court documents show. Ms. Ramoz said she was living in the town of Samsun on Turkey’s northern coast and had received threats online and in person.

She said she has heard people speaking Persian outside her door and one night someone tried to break into her apartment. “I was very scared, thinking that they might shoot me.”

Of the dissidents living abroad, nationals of other countries with Iranian heritage have been particularly targeted, said Sanam Vakil, deputy director of the Middle East and North Africa Program at the British research institute Chatham House.

“Dual nationals without a doubt are pressured for leverage on Western countries,” she said.

Mr. Aryan, 51, an American of Iranian origin, falls into that category. He even bought a house in Turkey hoping to live there with Ms. Khoshro after their online romance blossomed into a relationship three years ago.

But since Ms. Khoshro, 31, was detained during a visit to her family in Iran last year, and suffered beatings, threats and sexual assault during more than 60 days of imprisonment, she said, the couple have lived in fear of Iranian intelligence.

A law graduate from the provincial town of Khorramabad, Ms. Khoshro describes herself as an animal-rights activist.

She attended street protests but only ran into trouble with the law after beginning a relationship with Mr. Aryan. He is himself a refugee from Iran; he said he was detained and tortured as a 19-year-old and eventually found refuge in the United States in 2001.

But it was his work as an interpreter in Iraq for the Department of Defense from 2006, when the U.S. military was fighting Iran-backed militias, that he says has marked him as an enemy in the eyes of the Iranian government.

While imprisoned, Ms. Khoshro said she was repeatedly interrogated about Mr. Aryan and shown photographs of the two in Turkey.

She was made to undress and threatened with rape if she did not cooperate, she said. She said she was forced to record a confession and then told to rejoin Mr. Aryan in Turkey, drug him and lead Iranian operatives to him so they could abduct him. A court verdict dated Dec. 20 shows she was sentenced to a year in prison and 74 lashes.

Since arriving in Turkey she has refused to carry out the orders and has suffered a torrent of abuse in text messages from her interrogator. Since a fiancé visa to the United States can take months, her lawyer, Mr. Piskin, is urging the couple to apply for asylum for her in Western Europe.

Ms. Khoshro is unsure what to do.

“I lost my ability to make decisions,” she said. “I know if I go back I have to pay a high cost.”