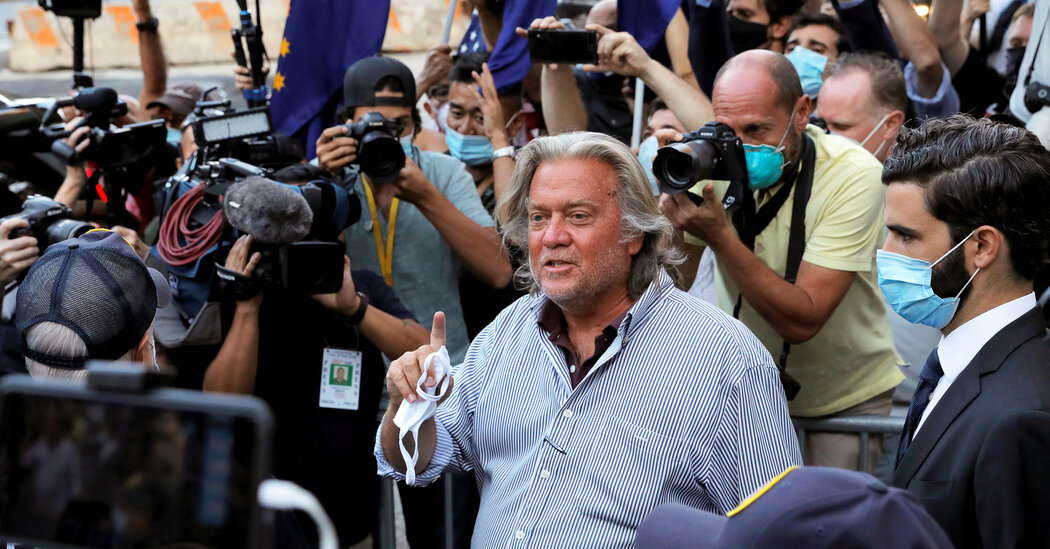 Of all the pardons former President Donald Trump granted in the hours before he left office, perhaps none was as galling to his critics, government watchdog groups and even some of his allies than the pardon of his former chief strategist, Stephen K. Bannon.

Mr. Bannon, 67, had been charged with conspiring to swindle donors to a private fund to build a wall along the Mexican border, siphoning off more than $1 million for personal and other expenses, the indictment said.

Even The Wall Street Journal’s editorial page, a conservative bastion, suggested Mr. Bannon’s pardon was unseemly and egregious, asserting that, if the charges were true, “Mr. Trump should be furious at his ex-adviser for turning his signature issue into a grift.”

But the pardon also left three other men who were indicted with Mr. Bannon in an unusual and unenviable predicament. None of them received pardons and so they still must face a trial in May. What’s more, legal experts said, Mr. Bannon could now be called as a government witness to testify against them, potentially increasing their legal jeopardy.

John S. Martin Jr., a retired federal judge and former U.S. attorney in Manhattan, said that, assuming Mr. Bannon accepted his pardon and the immunity it conferred, he could not invoke his Fifth Amendment right against self-incrimination if called to testify for the government against his co-defendants.

“He may not have walked as far away as he thought,” Mr. Martin said.

Even if a judge allows Mr. Bannon to invoke the Fifth Amendment on the theory he still faces possible state charges, as some experts suggest, his absence at the defense table would doubtless reshape the trial.

Mr. Bannon’s three co-defendants — Brian Kolfage, an Air Force veteran who lost both of his legs and one of his arms during his service in Iraq; Andrew Badolato, a venture capitalist; and Timothy Shea — will be left defending themselves without the most prominent figure in the alleged scheme.

Philip Allen Lacovara, a former deputy solicitor general of the United States and onetime counsel to the Watergate special prosecutor, said Mr. Bannon’s former co-defendants might feel resentment at being “left holding the bag that he was helping to fill.”

The three co-defendants have all pleaded not guilty, as did Mr. Bannon.

Although Mr. Bannon will not be a defendant in the trial, testimony could link him to the fraud scheme, and defense lawyers for the other men may try to deflect suspicion and guilt away from their clients and in his direction.

“They can point to what we call the empty chair,” said Benjamin Brafman, a leading criminal defense lawyer.

Mr. Bannon’s lawyer, Robert J. Costello, said, “Mr. Bannon is not going to comment on the pardon or any speculation about events that have not happened.”

Mr. Bannon had been an architect of Mr. Trump’s 2016 general election campaign and emerged as one of the most powerful figures in the White House early in the Trump administration before stepping down in August 2017. In announcing Mr. Bannon’s pardon, the White House called him “an important leader in the conservative movement” who is “known for his political acumen.”

The indictment unsealed in August said Mr. Bannon and his three co-defendants had used the popularity among conservatives of Mr. Trump’s plan to seal the southern border to dupe donors to the private fund-raising effort called We Build the Wall.

The organization had collected more than $25 million and had promised that all donations would go to the project, according to the indictment. The men were accused of using the money to pay for hotel and travel bills, credit card debt and other personal expenses.

Mr. Trump is widely believed to have pardoned Mr. Bannon as a protective measure, to maintain his loyalty at a time when the former president faces multiple lawsuits and investigations.

But Rachel E. Barkow, a New York University law professor and an expert on clemency issues, questioned the strategy of singling out Mr. Bannon for clemency among the four defendants.

“Even if you wanted to reward Bannon,” she said, “it was really kind of a strange choice.”

By allowing a trial to go forward against the three others, she said, the evidence still is likely to implicate Mr. Bannon in an alleged scheme that bilked hundreds of thousands of Trump supporters.

“You would want to pardon all of them so that the trial doesn’t go forward,” Professor Barkow said. “To the extent the evidence shows that they were all inextricably linked and in it together, that pardon is going to look worse and worse.”

One way the co-defendants might benefit from Mr. Bannon’s pardon would be at sentencing, should they be convicted. Each faces up to 40 years in prison if convicted of the two conspiracy charges in the indictment — to commit money laundering and wire fraud.

But with Mr. Bannon walking free, their lawyers can point to federal guidelines that advise judges to avoid unwarranted disparities in sentences, said Sean Hecker, a white-collar defense lawyer.

“What could be more unwarranted than one defendant in a criminal case, indeed, the most powerful of the four, being given a complete pass because of his relationship with the president?” Mr. Hecker said. “How, as a judge, do you get comfortable around the idea of imprisoning the remaining co-conspirators because the president left them hanging?”

Mr. Bannon’s case is not the only one in which Mr. Trump used his clemency power on behalf of allies and supporters while leaving behind other less-connected defendants who were facing similar charges.

On Dec. 22, for instance, he granted pardons to four security guards for Blackwater, a private company, who were convicted — one was serving a life sentence — on charges related to the 2007 massacre of 17 Iraqi civilians. A fifth former guard, Jeremy Ridgeway, who pleaded guilty and cooperated with prosecutors, was not pardoned.

“Once the president pardoned those guys, how can he not pardon me,” Mr. Ridgeway told The Los Angeles Times recently. “I accepted responsibility. I did the right thing. I testified. This is a matter of principle.”

Mr. Collins had pleaded guilty in 2019 to giving his son, Cameron Collins, inside information in advance about a failed drug trial, allowing his son to avoid hundreds of thousands of dollars in financial losses. Mr. Hunter had admitted in court that he misused more than $150,000 in campaign funds to support a lavish lifestyle.

But Mr. Trump did not pardon Mr. Collins’s son, who also had pleaded guilty and was sentenced to probation. Cameron Collins’s lawyer, Rebecca Ricigliano, declined to comment on the case.

Nor did the president immediately pardon Mr. Hunter’s wife, Margaret Hunter, who had pleaded guilty to conspiracy in the case and assisted the government.

It was only a day later, after Ms. Hunter’s absence from the pardon list drew criticism from local leaders and from a former assistant U.S. attorney in San Diego who helped prosecute the case, that the White House announced Ms. Hunter had been given a presidential pardon. Her lawyer, Logan Smith, said in a statement at the time that his client “accepts this unexpected pardon with gratitude and humility.”

WASHINGTON: Four members of the Sikh community are among those who killed in the mass shooting at the FedEx facility in Indianapolis on...
Read more
NEWS

DMX public memorial to be held at Barclays Center in Brooklyn......
Read more