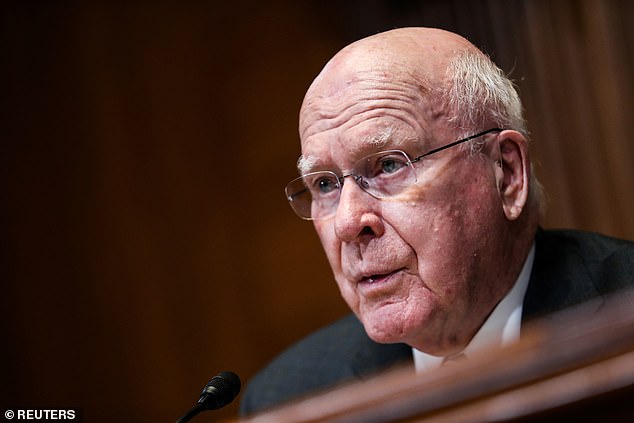 Donald Trump’s impeachment trial will be presided over by Patrick Leahy, the longest-serving Democratic senator, not the chief justice, it was revealed Monday.

House impeachment managers will carry out the symbolic act of formally walking an impeachment article of Trump to the Senate on Monday – officially beginning the first impeachment of a U.S. president who is out of office.

The moves sets up an impeachment trial to begin within weeks,  with the Senate Republican conference already split  – and GOP Sen. Rob Portman announcing his retirement Monday morning.

There is expected to be one marked change from Trump’s first impeachment: Chief Justice John Roberts is almost certain not be in the chair for the trial.

The Constitution establishes that ‘when the President of the United States is tried the Chief Justice shall preside.’

But it makes no specific mention of a former president. Roberts was reportedly anxious to avoid presiding over a second Trump impeachment: a role that would test his efforts to remain nonpartisan, while once again soaking up part of his workday.

CNN reported Monday that Leahy, the most senior Democrat in the Senate and the president pro tempore, would likely preside.

At one point there had been speculation it would be Kamala Harris presiding, because of the vice president’s constitutional position as Senate president.

It was not immediately clear how having a senior Democrat presiding might affect the tenor of the proceedings.

Most likely to preside: Patrick Leahy, the Vermont Democrat who is presidenr pro-tempore 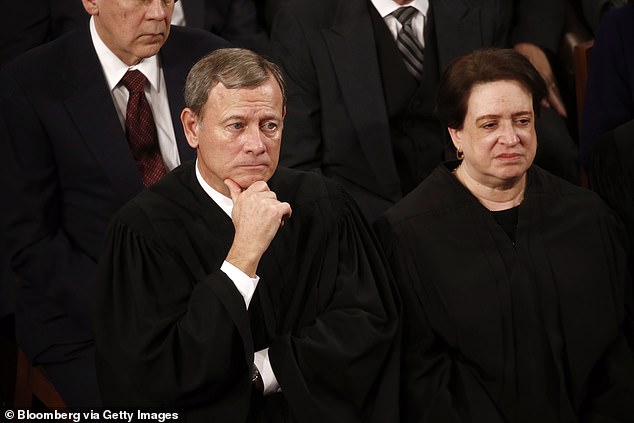 Supreme Court Justice John Roberts is not expected to preside over the historic second impeachment of Donald Trump, following reports he didn’t want the duty

A Leahy spokesman said the two Senate leaders were negotiating ‘all process issues’ regarding the trial and that Leahy would defer to them.

But the Republican caucus was also hit by drama Monday with Portman saying he would not run.

Portman has called the MAGA riot ‘an attack on democracy itself’ and said days afterward that Trump ‘bears some responsibility’ for what happened.

He is a two-term senator who was previously a House member and U.S. Trade Representative under the George W. Bush White House.

His retirement sets off a key open-seat Senate race in a hotly contested state, as Republicans sort through whether to continue to embrace or reject Trump amid the intra-party clash over impeachment.

Transmitting the impeachment article – an act undertaken by managers selected by Speaker Nancy Pelosi at a time she revealed to Senate on Friday – sets in motion procedures under the rules of the Senate for Trump’s trial.

Only broad outlines of the time-frame are known, but it is now a certainty that the trial will go forward, with the trial itself set to begin in about two weeks. 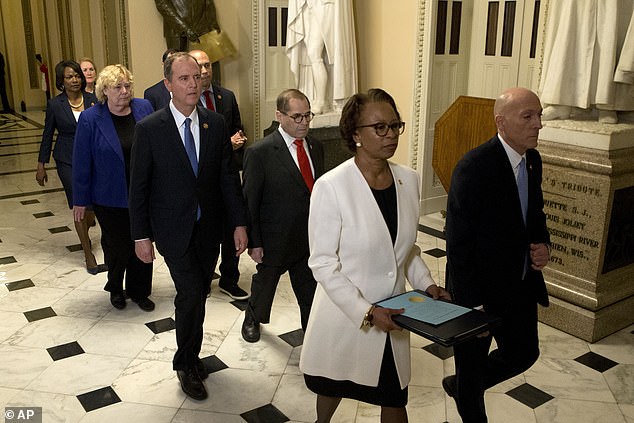 TAKE 1: House Sergeant at Arms Paul Irving and Clerk of the House Cheryl Johnson deliver the articles of impeachment against President Donald Trump to Secretary of the Senate Julie Adams on Capitol Hill in Washington, Wednesday, Jan. 15, 2020. A new group of managers will transmit a different article on January 26

The Senate is expected to receive the article around 7 pm tonight, after the managers physically bring a document charging Donald Trump with ‘incitement of insurrection.’

On Tuesday, senators will be sworn in to hear the trial. The trial itself will begin on Feb. 9, under an agreement reached Friday between Senate Majority Leader Charles Schumer and Minority Leader Mitch McConnell, although many details of how it will go have yet to be worked out.

It was still not clear who would preside over the trial and whether it will be Chief Justice John Roberts. 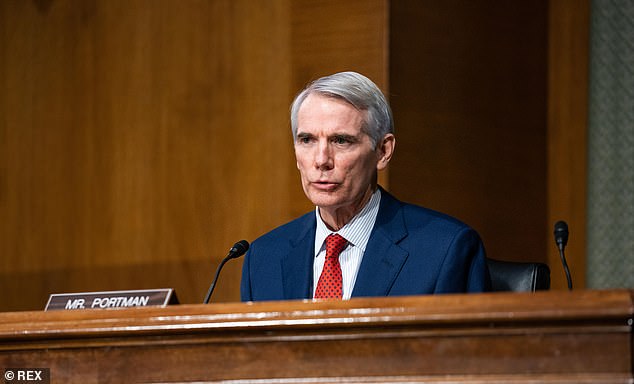 Ohio Sen. Rob Portman announced his retirement in in 2022. The Republican is set to sit as a jury in the trial of Trump’s second impeachment 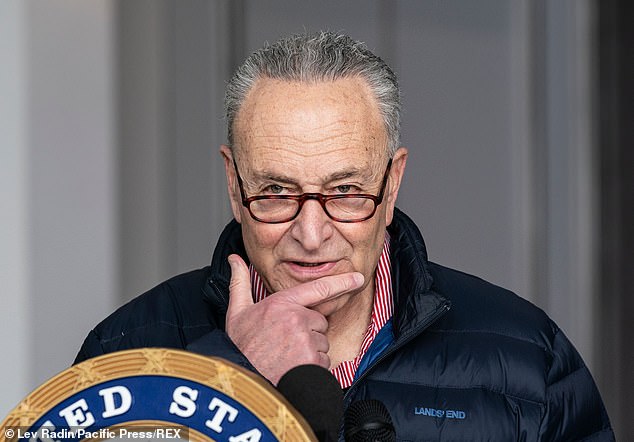 The Senate trial itself is set to begin January 9, under an agreement reached between Majority Leader Charles Schumer and Sen. Mitch McConnell

The trial will advance even as Senate Republicans have been expressing opposition to the impeachment – even after some of them denounced Trump in the immediate hours after a MAGA mob trashed the Capitol after attending a ‘Stop the Steal’ rally where Trump urged them to ‘fight.’

Among the most emphatic is Florida Sen. Marco Rubio (R-Fla.), who is up for reelection in Trump’s new home state. ‘I think the trial is stupid, I think it’s counterproductive. The first chance I get to vote to end this trial, I’ll do it.’

He also said it was ‘arrogant’ for the Senate to vote to bar Trump from holding future office – in a procedure laid out in the Constitution.

‘I think that’s an arrogant statement for anyone to make. Voters get to decide that. Who are we to tell voters who they can vote for in the future,’ Rubio told ‘Fox News Sunday.’

But Rubio also said Trump ‘bears responsibility for some of what happened’ when a mob of MAGA supporters ransacked the Capitol during the counting of the electoral votes of Joe Biden’s election victory.

Sen. Tom Cotton (R-Ark.), who opposed an effort to overturn the election during the Electoral Vote count January 6, says he doesn’t think the Senate has the authority under the Constitution to convict an ex-president.

‘The more I talk to other Republican senators, the more they’re beginning to line up’ in agreement, he said, of a conference that stood by Trump throughout his presidency.

‘I think a lot of Americans are going to think it’s strange that the Senate is spending its time trying to convict and remove from office a man who left office a week ago,’ he said.

The GOP senators move toward Trump comes even amid a bombshell New York Times report that a top Justice Department official met with the president in his final weeks in office about an effort to announce a federal investigation into the Georgia election results – and a plan for Trump to fire the acting attorney general after he wouldn’t go along with a probe into baseless allegations of election fraud. Trump reportedly backed down only after a team of top DOJ officials threatened to quit if he went ahead with the plan.

A group of legal scholars have pointed to past impeachments for lower offices even after the occupants had resigned or left office.

Utah Sen. Mitt Romney, who voted for an impeachment article against Trump in January, is among a handle of Republican senators most likely to vote to convict.

‘I believe that what is being alleged and what we saw, which is incitement to insurrection, is an impeachable offense. If not, what is?’ he said.

The two-week pause negotiated by leaders allows for both sides to draft legal briefs.

GOP AND THE TRIAL

To get a two-thirds majority of every voting senator Democrats need at least 17 Republicans, assuming all Democrats vote to convict. None of the 50-member GOP caucus has said they will vote to convict. Here are some of those in play.

COULD VOTE TO CONVICT

Voted to convict before and slammed Trump’s actions after riot

Said Trump should quit over the riot. Already survived a primary defeat

Targeted before by Trump, slammed GOP leaders for violence already

Number two in the Senate caucus, already target of Trump demand for a primary

Called attack ‘assault on democracy.’ Up in 2022, never a Trump loyalist

Apologized to black voters for planning to overturn election

Said Trump voters ‘want my head off’ for not overturning election

Not up for election until 2026 in purple state

Up in 2022 and could face Ivanka; convicting her father might help

Friend of Mike Pence, could be moved by calls for him to ‘hang’

Says she doubts trial is constitutional but will listen to arguments