The Grizzly within the Purple Pants 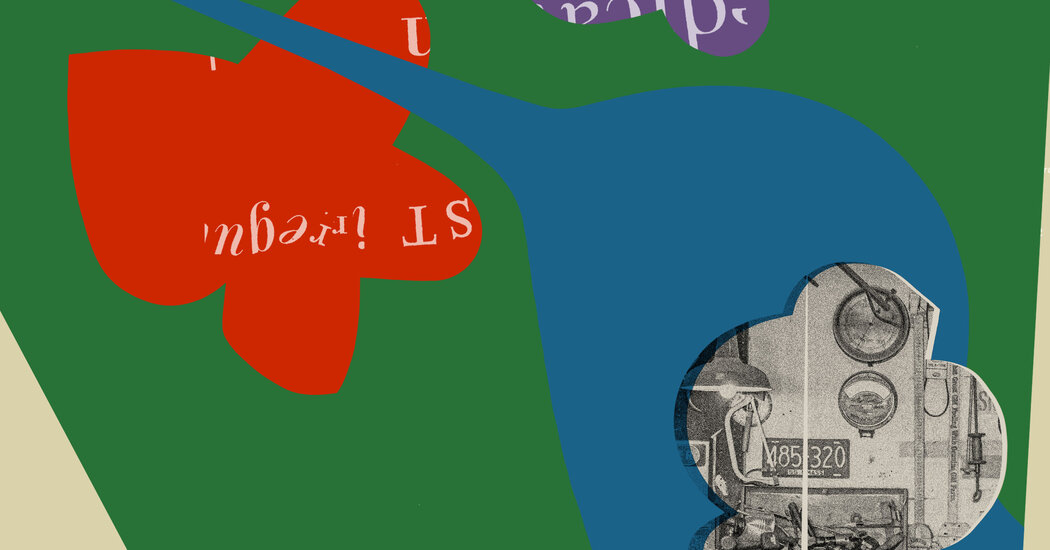 Russell Lee spat a wad of snuff into a Planters peanuts can. We sat at a picnic table in his backyard, next to the railroad tracks. He jackhammered the ground with his right leg.

“Your mom’s having an affair,” said Russ, my mother’s husband.

“What’re you talking about?” I stared at his face — grayed muttonchops against skin bronzed from working under the Texas sun. Hummingbirds buzzed past us, sucking sugar water from the cherry-red feeder. I wanted to crush them.

Russ struggled against tears. “And she has AIDS. I have proof.”

His accusation rang false, but adults held secrets. Then 21, I had mine.

I had met Russell Lee even before my mom did. When I was 5, my uncle took me to visit one of his ailing relatives. In walked a brawny guy carrying a motorcycle helmet and wearing purple pants. His thinning black hair was long and curly.

I wondered if he was a hippie. I’d seen ones on TV but never in real life.

When I was 6, my father, a suit-and-tie-wearing principal, descended into psychosis from abusing alcohol and speed. My mother, Nelda, a petite blonde schoolteacher, escaped with me when the death threats became body blows and a brandished .38.

Mom filed for divorce. The court forbade my father from future contact. We never saw him again.

Three months later, my mom’s sister arranged a blind date with one of her in-laws. He turned out to be Russell Lee, the man in the purple pants.

Mom loved that Russ had overcome life obstacles. One-quarter Cherokee, he was the last of 12 kids in an evangelical family of sharecroppers in the Ozarks. His mother died when he was 7. At 14, Russ quit middle school. He married four years later, had two kids, and by 45 had been divorced for a decade.

Within six weeks, he and my mom married. We moved from a middle-class life in conservative San Antonio to a duplex covered in psychedelic posters in liberal Austin.

My mother told me that Russ was my father now, so I should call him Dad.

I was a first grader and did as told but felt like a liar. Russell and I had met only four times.

He was an avid outdoorsman. I loved books and music. Scrawny, blond and asthmatic, I embodied my stepfather’s opposite, an albino salamander next to a grizzly bear.

Mom wanted me to be more like normal boys. She and her husband decided to remold me.

Cub Scouts was first. I kept offering to make the troop cupcakes.

They redoubled their efforts.

Every boy should know how to hunt and fish, Russ said. I wanted to play Scrabble, but he took me fishing. I threw the pole into the water. He had me shoot a rifle at a coffee can. I missed. “The only ones who’ll be safe are the deer,” he said, shaking his head.

Over time, the relationship with my stepdad became more contentious. Russ grew irate when I was elected student council president my junior year, saying the position interfered with my J.C. Penney janitor job.

He wanted me to quit, but I argued that the position might help me with college scholarships. Nelda and Russ had no money. I negotiated a compromise. “I won’t run again next year.”

But my plan was to run for senior class officer.

The next fall, we went to dinner at a relative’s house. Our hostess hugged me. “The ladies at church say you were elected class president. Congratulations!”

My stepdad smacked his fist against his thigh. “You promised me!” He didn’t look at me during the meal.

“You lied! Now you gotta quit,” he yelled, later in the car.

I startled myself when I said “no.”

He wanted me to move out, but my mother begged for me to be able to stay. I avoided him, going into their home just to sleep.

Every man should know how to work on his car, he said.

Before my last semester, Russell brought up the mechanics’ course again.

The only way I could fit it into my schedule was by dropping calculus, physics and AP English, so I refused.

I stuffed my backpack.

“School ends soon. Let him stay until then,” mom pleaded.

Russ acquiesced, but skipped my graduation.

I moved out. When Russell and I saw each other at family events, we’d shake hands for show but keep our distance.

In my junior year of college, Russ was diagnosed with lung cancer. After he’d recovered from surgery, Nelda moved into a motel. My stepfather stayed at the house by the railroad tracks.

When my mom asked me to go see him, I agreed — as a favor to her.

It was during that visit he announced that my mother had AIDS, and that she had been cheating on him with the train engineers.

“When the horn blows, it’s a signal.” He believed my mother was meeting the railroad staff for trysts in a nearby abandoned shack.

“The tracks bend there,” I said, pointing. “The horns are warnings.”

He didn’t believe me. “There’s proof she has AIDS in the shack,” he said.

I crossed the tracks and went inside. “Nelda has AIDS” was spray-painted on a wall. But I recognized Russ’s handwriting. His capital “I” looked like a tadpole swallowing its tail.

When I called my mom, she cried. “He kept accusing me of grotesque sexual infidelity. I couldn’t take it.”

Because of our history of emotional distance, I wasn’t wounded by Russ’s break with reality. He’d been diagnosed with paranoid schizophrenia when I was in my teens. But mom hid the depth of his mental illness from me.

Witnessing the extent of his disorder made me kinder. I started visiting my stepdad on weekends. We convinced him to visit his psychiatrist, who recalibrated his medications. Nelda and Russ reconciled.

Though I’d come to understand him, it took me the better part of a decade to allow myself to trust him — and my mother — with my secret. At 30, I told them I was gay.

“Never made any difference to me,” Russ said.

My jaw hit the floor.

“He’s known since you were 16,” Nelda said. “A boy telephoned. Russ went to get you. You fainted.” I remembered the phone call, but hadn’t realized they did, too. A guy from Nebraska I had a crush on had called long-distance. We’d met at student council camp and I’d been desperate for him to like me.

She paused. “It was hard for me, but he says you were born this way.”

So, Russell Lee had been my secret ally all along.

When I was 45, he fractured a hip, had a heart attack and went into a coma. That night, the nurses told Nelda she had to leave. She hugged Russ. Though he was unconscious, his arm pulled her closer.

I flew back to Texas from New York. “There’s little chance for recovery,” a doctor said. We signed the papers to unplug the respirator.

The morning of his funeral, I walked outside. A hummingbird hovered near my face.

“If I could choose anyone in the world as my dad, I’d choose you,” I whispered. The tiny creature floated a moment longer. Then, it darted away.

Court Stroud lives in New York City, where he’s working on a book.

“You had a sort of a sense of resilience and ‘grit,’ even prepandemic that I think served them well,” she said. “I do...
Read more
Health & Fitness

On Feb. 22, Mom texted that she and Dad had booked a March 11 appointment to get their first shots, followed by second...
Read more
Health & Fitness

Don’t Take Your Head Out of the Clouds!

Dr. Nathanson often prompts patients to take this technique further by engaging with metaphors and visual symbolism. If her patients feel stuck, they...
Read more