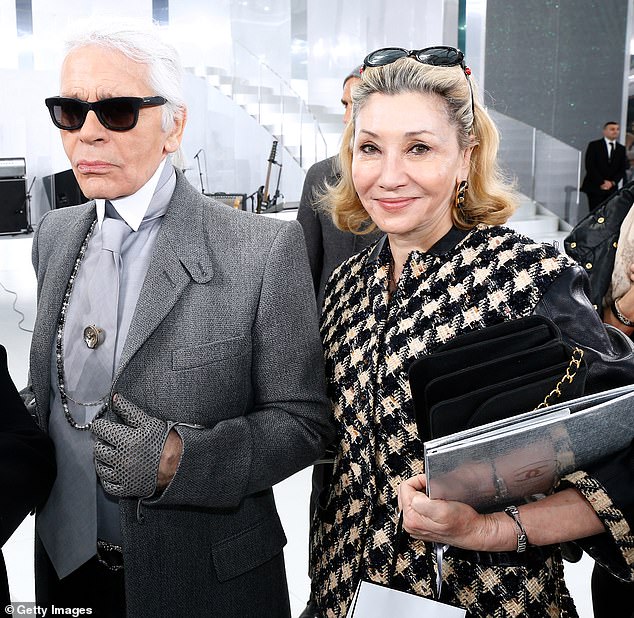 Christie’s is auctioning off over a hundred pieces of rare vintage Chanel jewelry estimated to be worth a total of over $163,000.

The 106-piece haul of designer necklaces, earrings, brooches, and more comes from the collection of Susan Gutfreund, an interior designer and New York City socialite who was friends with Chanel designer Karl Lagerfeld before his passing.

According to Christie’s, Lagerfeld personally gave Susan the jewelry, some pieces of which are one-of-a-kind and have never been seen before.

Going once! Christie’s is auctioning off 106 pieces of rare vintage Chanel jewelry belonging to socialite Susan Gutfreund, who was friends with the late Karl Lagerfeld (pictured in 2014) 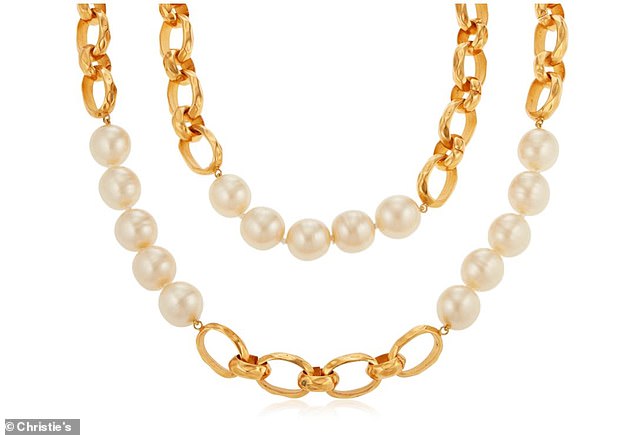 Up for grabs: Christie’s haul of designer haul of Chanel jewelry will be up for auction from January 14 to 29 and includes this chain set with faux pearls (expected price: $2,000-$3,000) 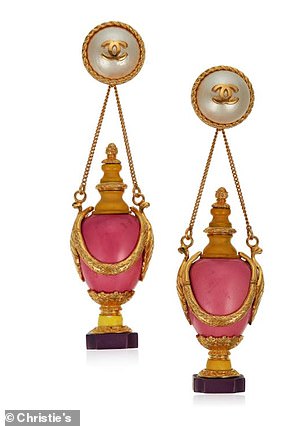 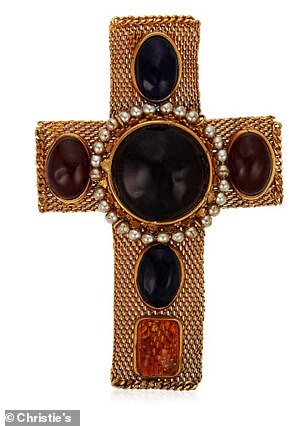 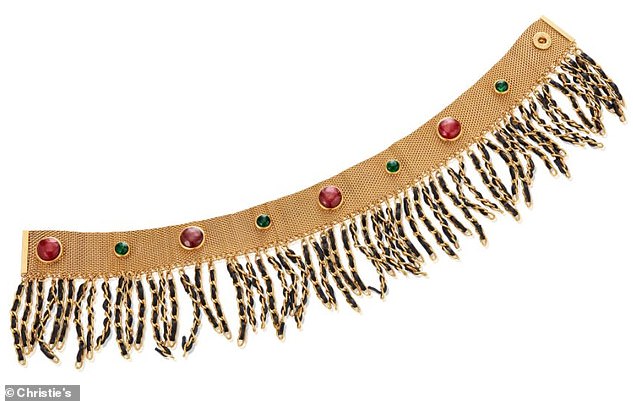 On sale: For an estimated $1,500 to $2,000, a bidder can take home this mesh choker set with round cabochon red and green gripoix glass, suspending a fringe of woven leather chain 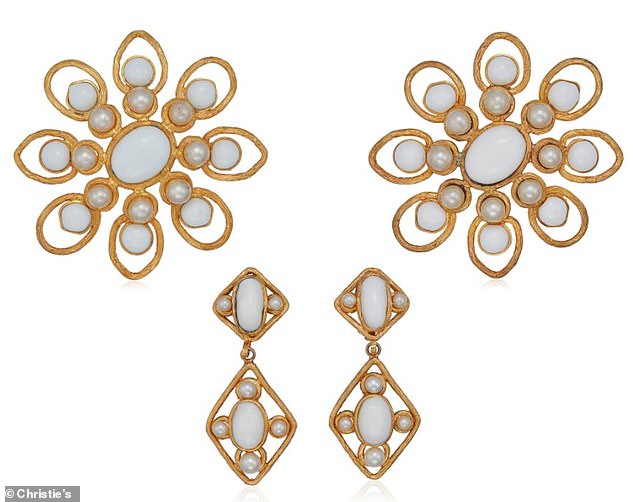 The collection, titled ‘Susan and Karl: Important Chanel Fashion Jewelry from the Collection of Mrs. John H. Gutfreund,’ will go on sale as part of a larger auction of pieces owned by Susan and her late husband, John Gutfreund.

‘Of all of the world’s greatest fashion designers, arguably the greatest of all time is Karl Lagerfeld,’ Claibourne Poindexter, specialist for Christie’s Jewels, told Tatler.

‘Karl’s sense of imagination came through in every collection he designed and, since his passing in 2019, desirability for these types of pieces has only increased.

‘To have a sale of these jewels which were created during some of his most prolific years at Chanel is something we never see at auction and Mrs Gutfreund’s superb sense of color, design and whimsy is evident throughout.’ 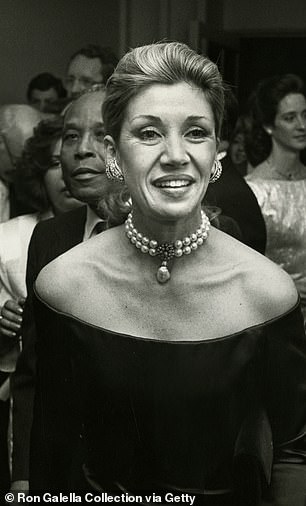 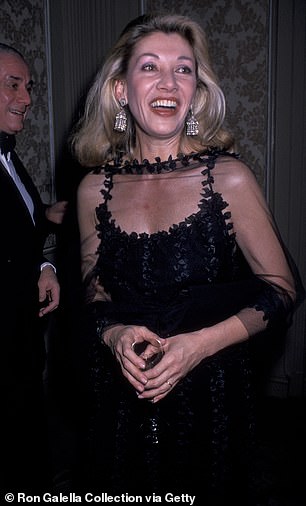 Socialite: In the ’80s, Susan and her husband made headlines for the money spent on their lavish homes and shopping trips (pictured left in ’88 and right in ’89) 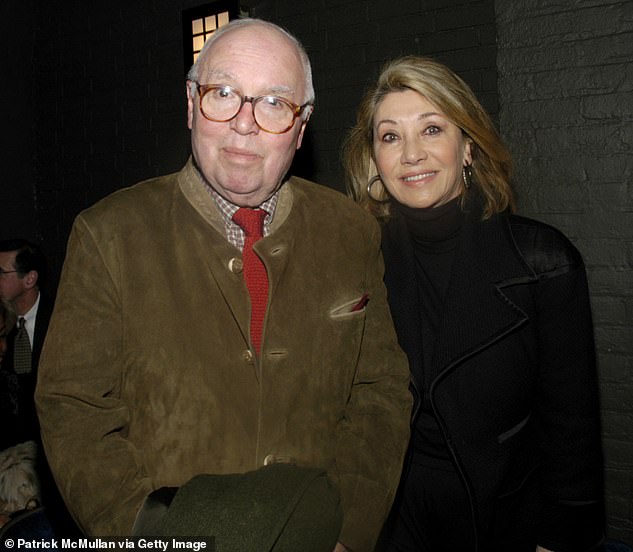 The couple: Susan was the second wife of businessman John Gutfreund, having tied the knot in 1981 when she was 35 and he 51, and stayed together until his death in 2016 at age 86 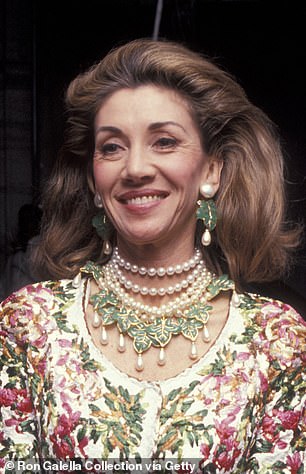 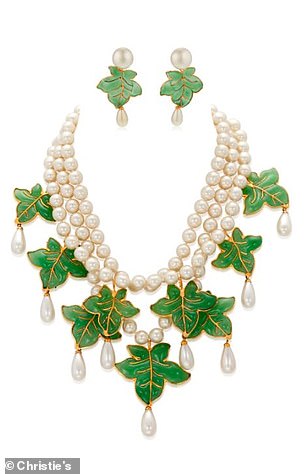 Her gems: A faux pearl necklace with glass leaves and a matching pair of earring, which Susan was pictured wearing at a Vogue party in 1992, may go for $4,000 to $6,000 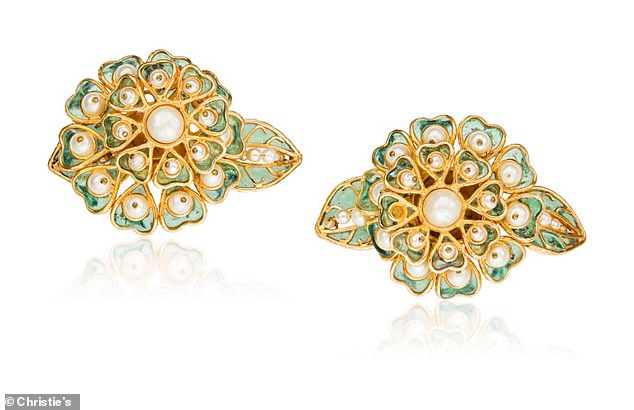 Bling bling! These camellia flower earrings faux pearls and poured green gripoix glass leaves are estimated to get $2,000 to $3,000 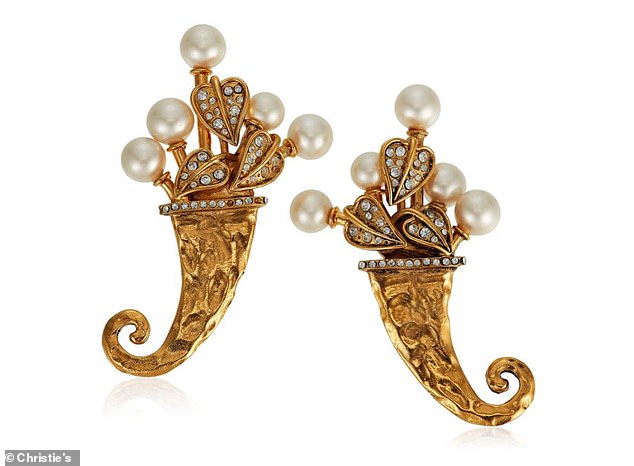 Ripped from the runway: This pair of cornucopia earrings with faux pearls and round rhinestones have an estimated price of $1,000 to $1,500 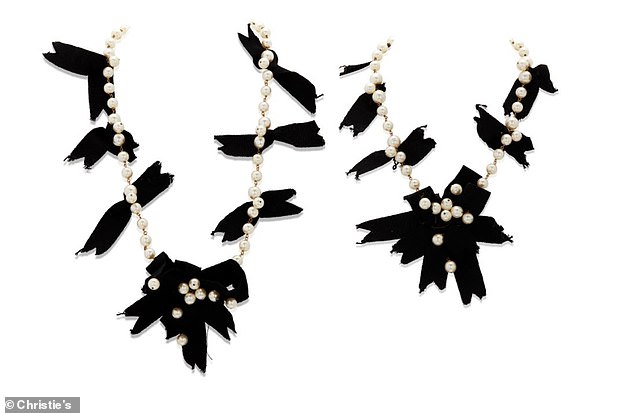 Fancy: These chains of faux pearls with black grosgrain ribbon is expected to get bids of $2,000 to $3,000

Among the pieces are many made with faux pearls, including a three-piece set of earrings, ring, and bracelet that is estimated to sell for $3,000 to $5,000.

According to Christie’s, the majority are runway prototypes not originally intended for a retail consumer, and as such, ‘many of the lots are extremely fragile and may not withstand regular wear or use.’

Susan, a former Pan Am flight attendant, came by these special pieces through her years of friendship with Lagerfeld, whose fashion shows she attended in Paris.

Susan was the second wife of businessman John Gutfreund, having tied the knot in 1981 when she was 35 and he 51, and stayed together until his death in 2016 at age 86. Together they have one son, John Peter, who was born in 1985.

John and Susan’s luxe life was well documented in the 80s, when John was the CEO of the investment bank Salomon Brothers Inc. and Business Week called him the ‘King of Wall Street.’ 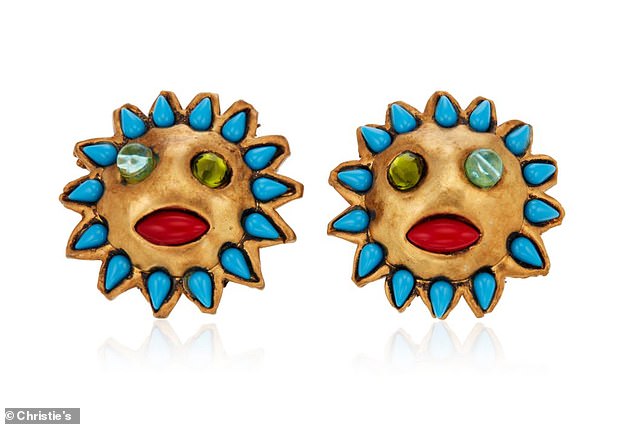 Certainly unique! These ‘smiling sun’ earrings are estimated to get $500 to $700 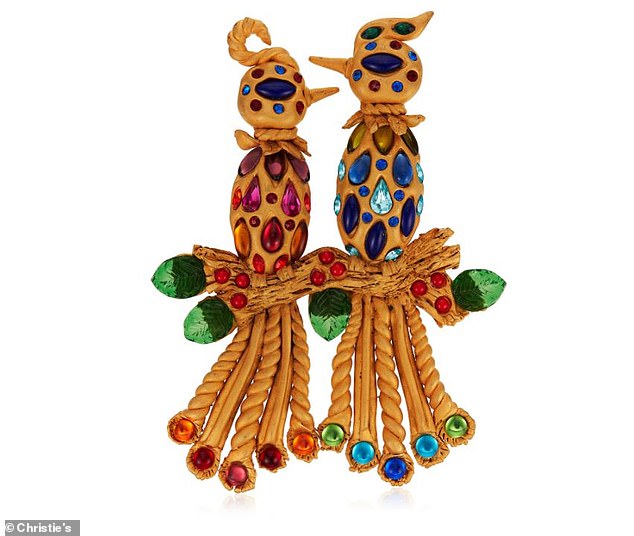 Definitely not understated! This bird brooch with cabochon and faceted stones and glass leaves has an estimated price of $3,000 to $5,000 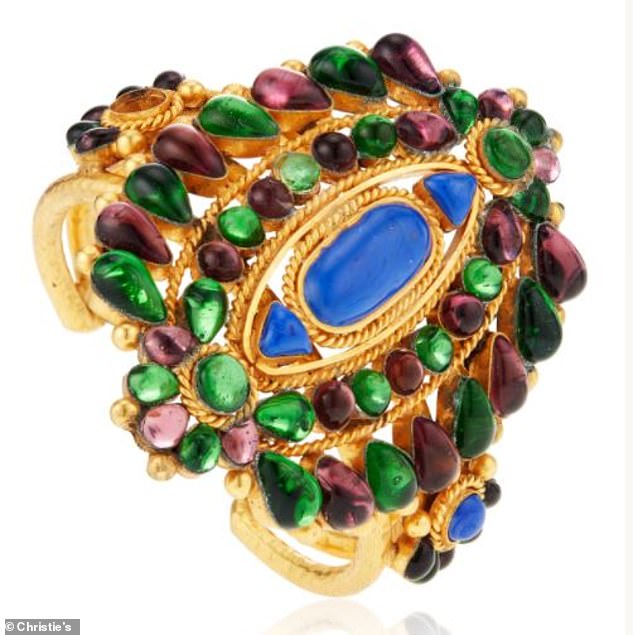 Colorful: This wide cuff set with multi-colored gripoix glass, mounted in gilt metal, is expected to go for $1,500 to $2,000 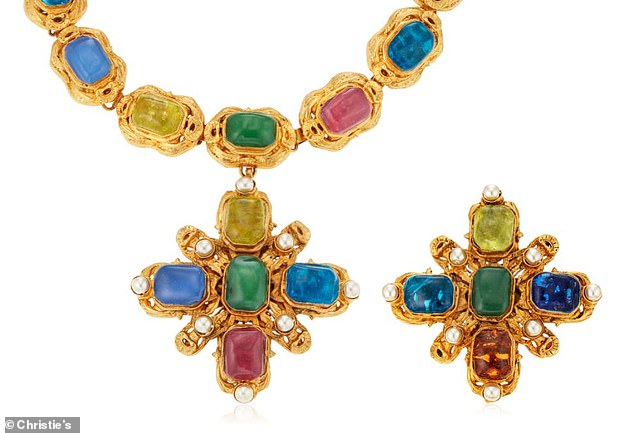 Multicolor: This necklace and brooch set is made with multicolroed gripoix glass and expected sale price of $3,000 to $5,000 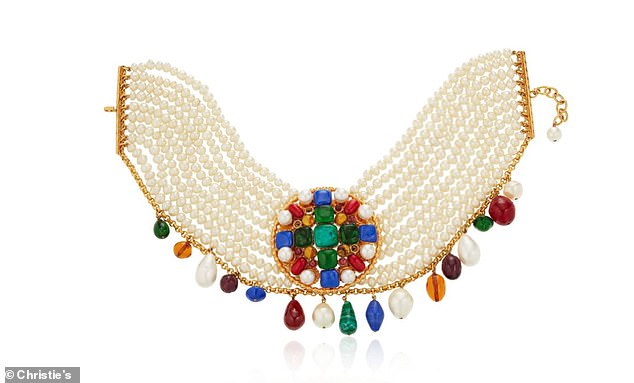 Faux pearl everything: This multi-strand faux pearl necklace with gripoix glass station has an estimated price of $1,000 to $1,500

According to the New York Times, they splashed out ‘lavish sums’ on their Manhattan apartment and Paris townhouse, and even rented a British castle and a French museum for parties.

They were known for taking weekend trips from New York to Europe on the Concorde to go on shopping sprees, and Susan earned the nickname ‘Social Susie’ from Women’s Wear Daily.

Photos from the ’80s  and early ’90s show Susan dressed to the nines at New York City galas, often topping her designer gowns with Chanel jewelry.

Then, in 1991, scandal hit when John and his company were involved in illegal bids for Treasury bonds. He resigned, and settled possible fraud charges by paying a fine and giving up any future of managing another securities firm. 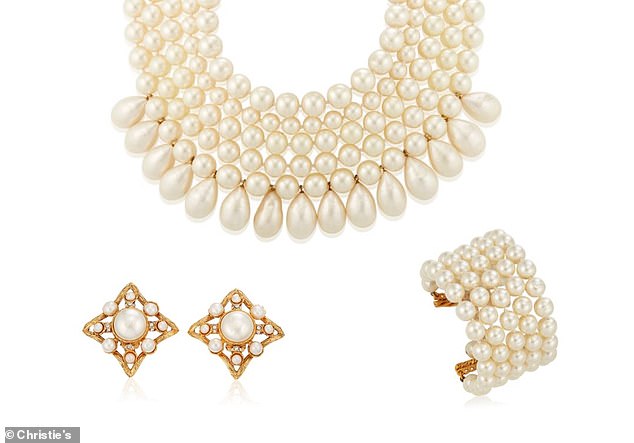 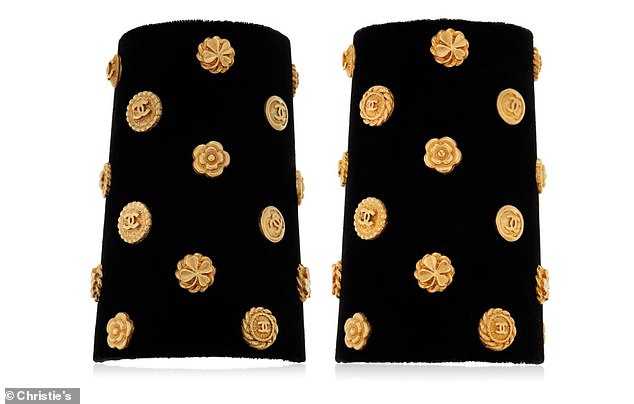 Statement-makers: Bidders are expected to offer $1,500 to $2,000 for these wide velvet cuffs backed by leather and studded with gilt metal

The auction is also set to include decor from the 12,000-square-foot Fifth Avenue apartment that Susan sold for $53 million after her husband’s death.

‘Obviously, for Susan, without her husband, it was a pretty large apartment to be living in on her own,’ William Strafford, a senior international specialist of European furniture and decorative arts at Christie’s, told Bloomberg.

‘This collection reflects Susan’s far-ranging and adventurous and individual tastes,’ he added.

All 665 lots from the auction are expected to fetch a grand total of $7.4 million.

NEW YORK: President Joe Biden pledged to “do more” to address gun violence and implored Congress to act after a mass shooting in...
Read more
NEWS

April 13, 2021Dear Fellow Brearley Parents,Our family recently made the decision not to reenroll our daughter at Brearley for the 2021-22 school year....
Read more