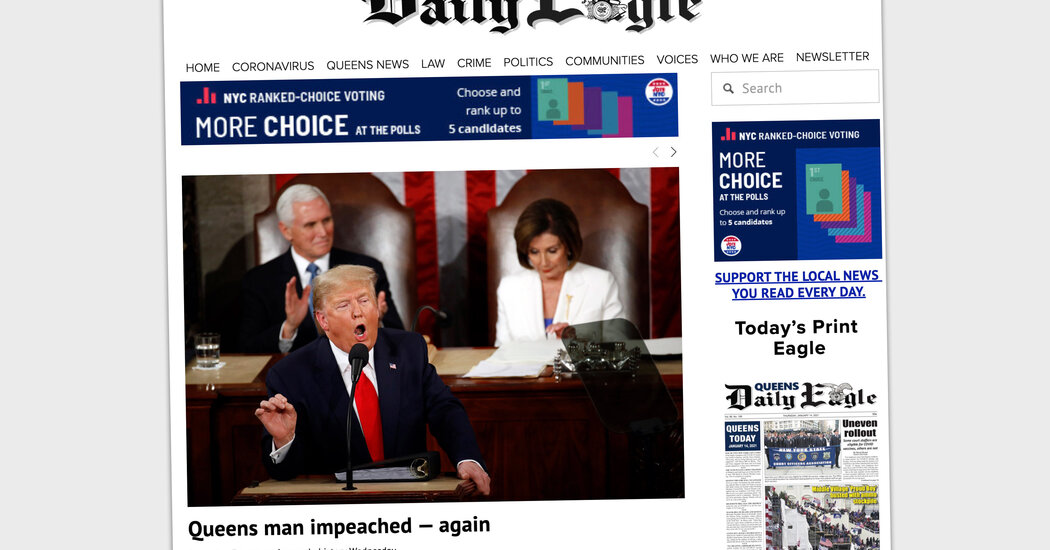 Mr. Trump was born in the borough’s Jamaica Hospital Medical Center and grew up in Jamaica Estates, an enclave partly developed by his father, the real estate executive Fred C. Trump.

The current impeachment proceedings are testing the bounds of the process, raising questions never contemplated before. Here’s what we know.

The first edition of the Queens Daily Eagle was printed on June 25, 2018. The only English-language daily newspaper in Queens, it is a sibling publication to the Brooklyn Daily Eagle, a publication that started in 1841, closed in 1955 and was revived in 1996 by Dozier Hasty, the owner and publisher of Brooklyn Heights Press.

Mr. Sperling said he was excited to see the latest “Queens man” headline gain traction on Twitter, with 4,000 retweets and more than 17,000 likes, but he added that financial support would do more good than social media engagements.

“If 1 percent of the people who like this tweet gave $5 a month to the Queens Daily Eagle, it would be enough money to pay a single reporter for a year,” he said. “Queens has a variety of cultures and languages and ethnicities and over two million people, and we just don’t have the news representation.”

Mr. Brand, 33, said the online attention helped raise the profile of a paper that covers Queens courts, transportation, neighborhood politics and social issues. “People come to the website because it’s gone viral, because some celebrity has posted it,” he said, “and they see, ‘Oh, they actually do really substantive writing as well.’”

The paper’s impeachment coverage held the local note throughout the Wednesday article, stating toward the end that Mr. Trump was the third president to be impeached by Congress — “and the first from Queens.”

When the government releases its latest consumer price inflation reading at 8:30 a.m. on Tuesday, Wall Street investors will be eagerly watching the...
Read more
Business

All eyes are on Midtown Manhattan as everyone anxiously waits to see if and when office workers and tourists will return to what...
Read more