Home Politics Pelosi says she is going to ship Trump's article of impeachment to...
Politics 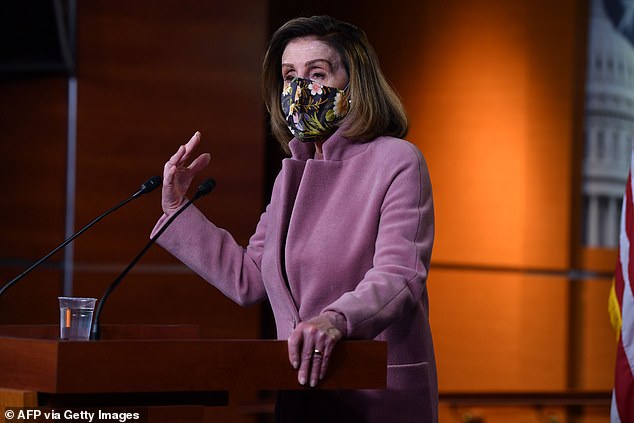 Speaker Nancy Pelosi said Thursday she will send the impeachment article against Donald Trump to the Senate in ‘a few days’ so his trial can begin.

That would put the start date sometime next week in what could be a speedy trial as Republican senators say there are not enough members in their party willing to convict the former president.

Pelosi said she’ll be talking with the House impeachment managers ‘in the next few days’ about when ‘the Senate will be ready’ to receive the article.

‘We will be in another few days, when I’ll be talking with managers, as to when the Senate will be ready for the trial of the then President of the United States for his role in instigating an insurrection on the House, on the Capital of the United States, on our democracy to undermine the will of the people,’ she said.

The speaker said she was waiting on President Joe Biden’s inauguration to take place and for the Senate to return to session. With Kamala Harris becoming vice president, Democrats now control the upper chamber.

‘We had to wait for the president, the Senate to be in session. They’ve now informed us they’re ready to receive. The question is, other questions about how a trial will proceed. But we are, we are ready,’ she said at her weekly press conference on Capitol Hill.

Senate Democratic Leader Chuck Schumer and Senate Republican Leader Mitch McConnell are still working out a power-sharing agreement for the 50-50, evenly divided chamber. There are also questions over who would preside over Trump’s trial when it begins.

When pressed on if she could be more specific on when she will transmit the article, Pelosi responded: ‘Nope.’

‘There’s no use asking. I’m not going to be telling you when it is going,’ she noted.

Pelosi, who had a contentious relationship with Trump throughout his presidency and already impeached him once, castigated the former president for his role in the January 6th riot on Capitol Hill.

‘He roused the troops, he urged them on to fight like hell, he sent them on to the Capitol,’ she said.

Former President Trump’s impeachment trial could last a mere three days once the Senate begins the proceedings as the former president struggles to find lawyers to represent him.

Trump spent his first afternoon out of office at his Mar-a-Lago residence on the phone with allies. He had two queries: asking if GOP senators will vote to bar him from ever running for office again, two people with knowledge of the calls told The Daily Beast.  He also asked what lawyers should represent him in trial.

The former president is having trouble finding a legal team to represent him. Members of his first impeachment legal team, including Jay Sekulow and former White House Counsel Pat Cipollone, aren’t interested.

‘[Trump] said, ‘I really don’t know the lay of the land here,’ and he’s looking for some lawyers,’ Graham told Punchbowl News. ‘I’m trying to help him there, and he’s just trying to put together a team.’ 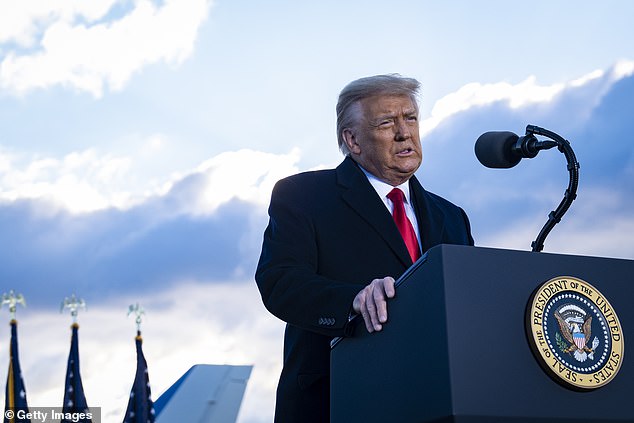 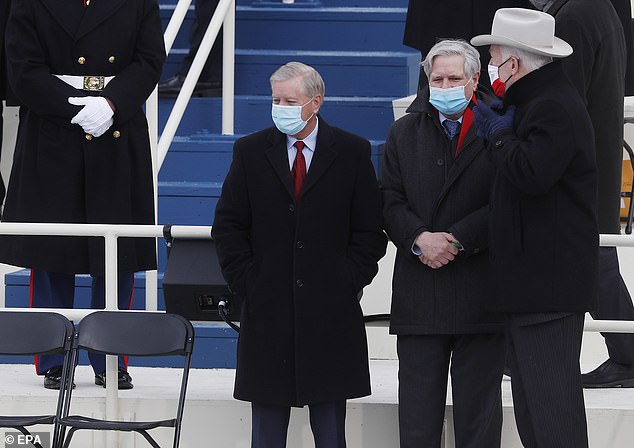 Giuliani told ABC News he would defend the president but other reports indicated Trump wasn’t sure he wanted the former New York City mayor on his team.

Trump will face trial on the charges of ‘incitement of insurrection’ for his role in the January 6th riot on Capitol Hill, where his MAGA supporters stormed the Capitol building, interrupting the certification of the election. The insurrection resulted in five deaths, hundreds injured and damage throughout the Capitol, including smashed windows, broken furniture and destroyed offices.

Lawmakers have privately discussed a three-day impeachment trial, Politico’s Playbook reported, which would be a record for any such matter.

Some consider the case open-and-shut given Trump’s actions on the day of riot. In comparison, the president’s first impeachment trial was a web to untangle regarding his call to the Ukrainian president and the legalities there.

At a rally the morning of riot, Trump told his supporters to march on the Capitol – a speech that resulted in many Republicans blaming him for the subsequent mob. Both McConnell and House Republican Leader Kevin McCarthy have said Trump shouldered some of the blame for the thousands of supporters that swarmed the building.

But a speedy trial also has its benefits.

Republicans don’t believe there are 16 votes to convict the president – the number of senators needed to join Democrats. And many are ready to move on from their former president.

‘Some people are for censure, some are for [convicting Trump], some say it’s unconstitutional. People are all over the place,’ a Republican senator told Punchbowl. 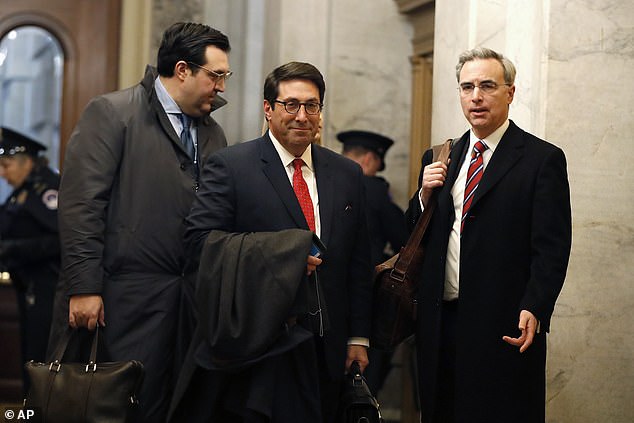 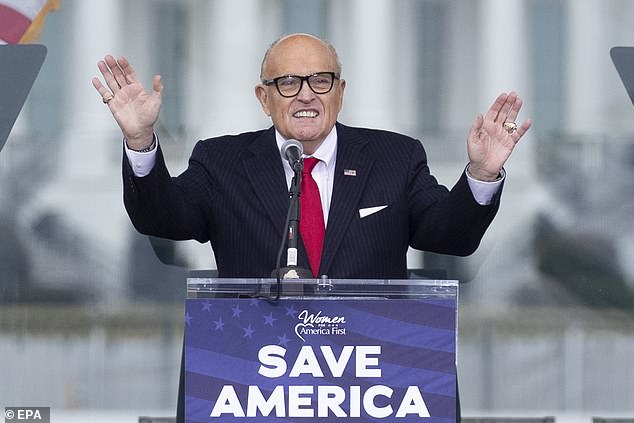 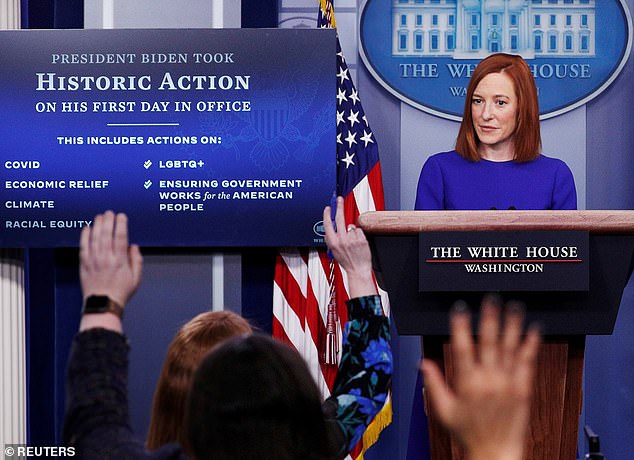 Notably, unlike Trump’s last impeachment trial, Senate Republican Leader Mitch McConnell is telling senators to vote their conscience – a dramatic difference from last year when McConnell actively worked to acquit Trump when he was impeached the first time.

An alternative would be for senators to vote to disqualify Trump from holding future office. The Senate could apply that punishment by a simple majority vote, but only if two-thirds of senators first found Trump guilty. It’s an option that could appeal to many Republican senators since it would prevent Trump from running for president again in 2024.

A short trial would also allow the Senate, now controlled by Democrats, to focus on President Joe Biden’s legislative agenda and confirming his Cabinet nominees.

The White House is downplaying any questions about concerns Trump’s trial could overshadow their first weeks in office.

‘We are confident that … the Senate … can do their constitutional duty while continuing to conduct the business of the American people,’ White House press secretary Jen Psaki told reporters at her first briefing.

‘He’s going to leave the mechanics, the timing and the specifics of how Congress moves forward on impeachment to them,’ she noted.

Senator Dick Dubin, a member of the Democratic leadership, told reporters on Capitol Hill Thursday morning it’s unclear when they’ll receive the article and what form the trial will take.

‘It’s still unresolved as to when she’s sending it over. It could be today, unlikely. Could be tomorrow. And then what we’re going to do with it, is whether or not it’s going to be a full blown trial with evidence and witnesses. Or quote expedited whatever that means that final decision isn’t even closed,’ he said.

There’s also the issue of whether Supreme Court Chief Justice John Roberts will preside over the trial.

The Constitution states that ‘When the President of the United States is tried the Chief Justice shall preside.’

But Trump is a former president, which could give Roberts a way out of presiding.

That would put Vice President Kamala Harris as next in line to preside over the trial, in her constitutional role as the Senate’s presiding officer.

Senate Democratic Leader Chuck Schumer seems unlikely to ask Harris to do it.

It is up to the Senate to set the rules of the trial and if the two party leaders, Schumer and McConnell, want to see Roberts preside, it is difficult to see how he would not, short of formally turning down their request.

Sen. Patrick Leahy of Vermont, who serves as president pro temp, is another potential candidate.

Schumer and McConnell are in talks about a possible power-sharing deal governing daily Senate operations, similar to one struck two decades ago.

READ THE FULL ARTICLE OF IMPEACHMENT