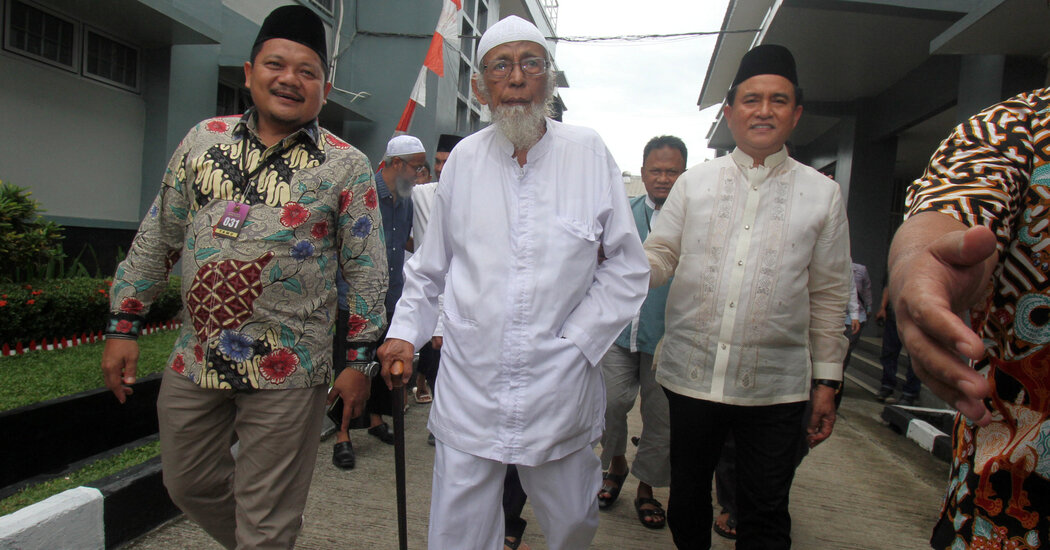 BANGKOK — One of Indonesia’s most notorious terrorists, the Muslim cleric Abu Bakar Bashir, was released from prison on Friday after serving more than 10 years of a 15-year sentence for helping establish a terrorist training camp.

Mr. Bashir, 82, is the co-founder and former spiritual leader of a clandestine terrorist group, Jemaah Islamiyah, that carried out a series of deadly attacks in the 2000s, including the Bali nightclub bombing in 2002 that killed 202 people, many of them Australian tourists.

Prison authorities said that he had completed his sentence with a reduction of 55 months for good behavior, Islamic holidays and other reductions. His release was confirmed by his lawyer, Achmad Midan.

“Our embassy in Jakarta has made clear our concerns that such individuals be prevented from further inciting others to carry out future attacks against innocent civilians,” Ms. Payne said this week.

Mr. Bashir’s release comes as the government is trying to combat another radical Islamic group, the Islamic Defenders Front, whose fiery leader, Rizieq Shihab, has called for a “moral revolution.” The authorities arrested Mr. Rizieq last month on charges of violating coronavirus protocols, and they ordered his organization to disband.

The country’s antiterrorism police also arrested 23 members of Jemaah Islamiyah last month, including Aris Sumarsono, better known as Zulkarnaen, a leader who had been wanted for 18 years.

Despite Mr. Bashir’s long history of terrorist activities, experts said they do not believe he poses a threat, given his age and isolation from the extremist movement while in prison.

“I don’t think his release changes anything in Indonesia,” said Sidney Jones, director of the Institute for Policy Analysis of Conflict in Jakarta who has long followed his activities. “Today’s terrorists can find all they need in terms of inspiration and instruction on their smartphones. They may respect him, but the world has moved on.”

Mr. Bashir, whose white hair and grin give him a kindly, grandfatherly appearance, had long sought to establish a caliphate, or Islamic state, in Southeast Asia by any means necessary.

In 1972, he co-founded an Islamic school in central Java, which served as a recruiting ground for Jemaah Islamiyah.

A crackdown on Islamists by the dictator Suharto forced him to flee to Malaysia, where he lived for many years and helped build the group into a formidable international network with cells in Indonesia, Malaysia, Singapore and the Philippines.

Among his close associates was his fellow Indonesian cleric, Riduan Isamuddin, also known as Hambali, who was believed to be Al Qaeda’s main link to Jemaah Islamiyah and the mastermind of numerous bombings. He has been imprisoned at the Guantánamo Bay prison for 14 years.

After Suharto’s fall in 1998, the two clerics returned to Indonesia from Malaysia, and Jemaah Islamiyah began its regional campaign of violence, including bombings of churches, the Bali nightclub and the JW Marriott Hotel in Jakarta.

The United States accused Mr. Bashir of being a key operative for Al Qaeda, but the Indonesian authorities had trouble making charges stick. He was acquitted of seven terrorism charges for the Bali bombing, but served 26 months on conspiracy and immigration charges.

Mr. Bashir praised the Bali bombers as “Islamic heroes” but denied any responsibility.

Mr. Bashir was arrested again in 2010 for helping mobilize and finance a militant group that set up an armed training camp in Aceh province. At the time of his trial, his lawyer asserted that the cleric faced charges only because of pressure from Washington.

His release comes 10 years and five months after his arrest.

Indonesia’s president, Joko Widodo, while seeking a second term in 2019, was on the verge of granting Mr. Bashir early release as a concession to conservative Muslims. But he withdrew that plan in the face of strong opposition at home and in Australia.

Mr. Bashir “is a household name, but he is not influential anymore,” said Alto Labetubun, an Indonesian terrorism analyst. “There’s always a possibility for him to be the patron of a violence cycle or new terror acts. But I believe his era has ended.”

Mr. Bashir’s family members said they did not plan a large celebration to welcome him home, perhaps having learned a lesson from Mr. Rizieq, who was arrested after organizing gatherings of thousands of supporters in defiance of coronavirus protocols upon his return from self-imposed exile in Saudi Arabia.

Over the course of the book, Ms. Woolever never makes the claim that the guide is comprehensive — and the end result does...
Read more
WORLD

ZHUOXI, Taiwan — The smell of damp earth filled the air on a recent moonless evening as the hunter wove through the dense...
Read more