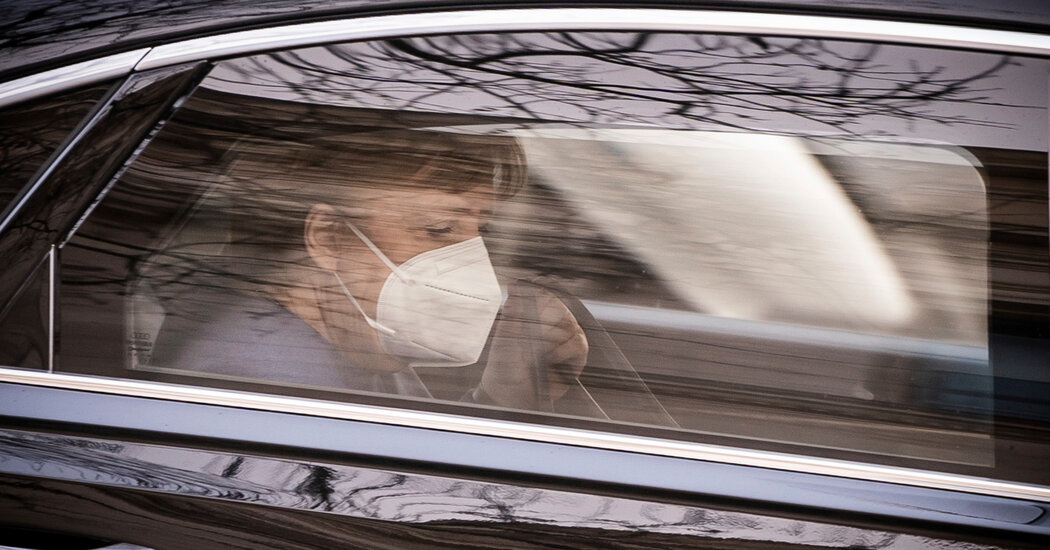 BERLIN — Germany’s largest political party will choose a new leader on Saturday, with the winner well positioned to succeed Angela Merkel as the next chancellor of Europe’s leading economy.

Regardless of the result, it will signal a new chapter for Germany and Europe, where the staid but steady leadership of Ms. Merkel has been a constant for the past 15 years. She earned respect for holding Europe together through repeated crises and, most recently, her deft handling of the coronavirus pandemic over the past year.

“In a sense, an era is ending,” said Herfried Münkler, a political scientist at Humboldt University in Berlin. “But in certain basic positions, such as the geopolitical situation and the economic conditions within the E.U., that all remains unchanged, regardless of who’s the chancellor.”

German voters will elect a new government on Sept. 26, and Ms. Merkel’s conservative Christian Democratic Union remains the country’s most popular party, according to a survey by Infratest/Dimap last week.

Ms. Merkel led the party for 18 years, stepping down in 2018. She was replaced by one-time heir apparent Annegret Kramp-Karrenbauer, who announced her own departure nearly a year ago over internal party strife. Since then, three men have been jockeying for the leadership position. But no clear front-runner has emerged.

While all three candidates appear to have a lot in common — all male, all Roman Catholic, all from the western German state of North Rhine-Westphalia — each harbors a divergent vision of the future of the party that has governed Germany for 50 of the past 70 years.

Here is a look at the candidates and where their leadership could take Germany:

In terms of experience, Mr. Laschet, the governor of Germany’s most populous state, North Rhine-Westphalia since 2017, has the strongest hand. The only candidate who has won an election and served as a governor, the 59-year-old Mr. Laschet has nevertheless struggled to generate enthusiasm for his campaign.

He announced his candidacy last February, flanked by Ms. Merkel’s health minister, Jens Spahn, who ranked above the chancellor as Germany’s most popular politician in a survey in late December. Mr. Spahn had sought the party leadership position in 2018, but this time around, he pledged to back Mr. Laschet.

The popularity of Mr. Spahn and another man who is not vying for party leadership, Markus Söder, the governor of Bavaria, has led top Christian Democratic officials to sever the decision over who will run for chancellor in elections from the party leader vote on Saturday. That means that whoever is chosen party leader will not necessarily be the next chancellor.

Mr. Spahn’s backing of Mr. Laschet was supposed to garner support from those who saw in the 40-year-old Mr. Spahn a chance to rejuvenate the party. But instead, it has shifted the focus to a possible scenario in which the health minister could run for chancellor while Mr. Laschet remains party leader.

Mr. Laschet is seen as the candidate most likely to continue Ms. Merkel’s centrist style of stable politics. He is a strong supporter of German industry and shares the chancellor’s idea that Germany benefits from diversity and integration.

Staunchly pro-European, Mr. Laschet also considers a strong relationship with Russia as central to Germany’s success, although he views the United States and NATO as essential to lasting security in Europe.

Mr. Merz, a former lawmaker, is viewed as the candidate most likely to break with Ms. Merkel’s style of leadership and return the party to its more traditional conservative identity. At the same time, he has had to reassure voters that the would not move “one millimeter” toward the far-right Alternative for Germany.

Mr. Merz, 65, has not held political office since 2002, when Ms. Merkel pushed him out as leader of the Christian Democrats’ party caucus in Parliament. Three years later, he left politics for the private sector, where he amassed a personal fortune that he has played down in the campaign, portraying himself as upper-middle class instead of a millionaire.

He is the least popular with women, who flocked to the party under Ms. Merkel’s leadership and became an important voting bloc. Many recall that Mr. Merz voted against criminalizing rape within marriage in 1997, and Anja Karliczek, Germany’s minister for education, has warned that his penchant for a sharp quip on hot-button issues such as immigration could threaten party cohesion.

But that style is popular with young conservatives and the party’s right flank, which welcomes his criticism of Ms. Merkel’s decision to take in nearly 1 million migrants in 2015 and his calls to return to tighter fiscal policy.

A proponent of strong ties between Europe and the United States, Mr. Merz views a deeply integrated European Union more skeptically and criticized the recent 1.8 trillion euro, or $2.2 trillion, stimulus and budget package agreed to in Brussels, which included issuing joint debt — long a no-go for Germany.

Mr. Röttgen, a former environment minister under Ms. Merkel, has been seen as less of a favorite, although he recently had a strong showing in polls. It is probably not enough, however, to ensure him a clear shot at the party leadership. Still, the 55-year-old foreign policy expert could carve out a path to the top if the race comes down to a runoff between him and Mr. Merz.

Mr. Röttgen lost his post as environment minister in 2012 after a poor performance in the race for governor of North Rhine-Westphalia that year. Since then, he has become a leading foreign policy expert in Parliament and took many by surprise when he entered the race for the party leadership.

Mr. Röttgen has built a following among younger voters and women, pointing to his role in working to transform the German economy to one powered by green energy and emphasizing the importance of improving digital infrastructure and know-how to position the country for a future where it can compete with China or the United States.

Mr. Röttgen says he wants to build on the issues of diversity and equality championed by Ms. Merkel, ensuring the conservative Christian Democrats remain relevant in the face of a rise in popularity of the Greens, especially among young urban voters. He is in favor of continued European integration and strong ties to Washington, but he says that Germany needs to take a stronger role in the trans-Atlantic relationship.

He many have enhanced his appeal to party delegates who have an eye on the general election in the fall with his willingness to cede the candidacy for chancellor if it is in the party’s best interests, stressing the importance of teamwork over individualism.

WASHINGTON — President Biden’s decision to pull all American troops from Afghanistan by Sept. 11 was rooted in his belief that there is...
Read more
WORLD