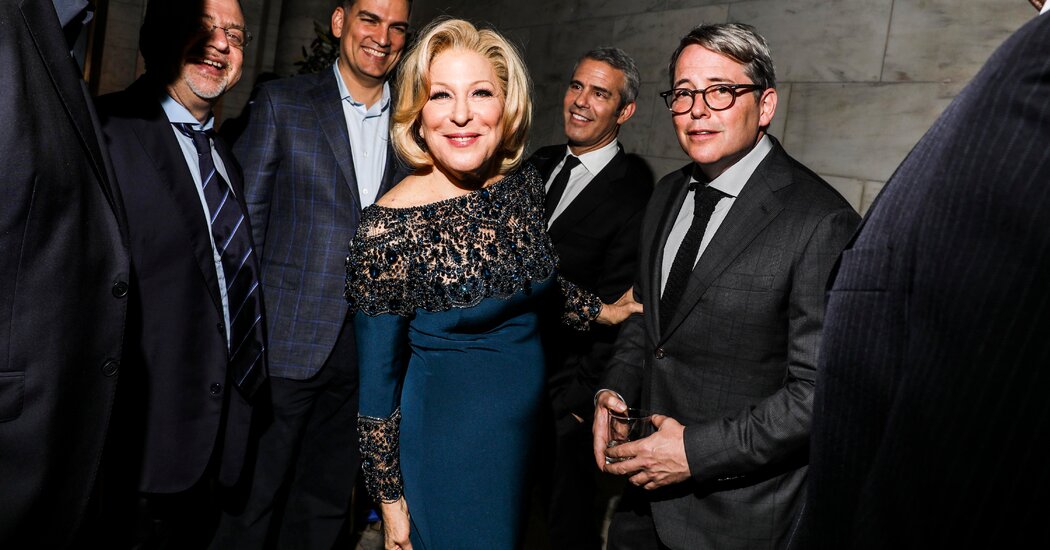 With the New York charity circuit on hiatus, here is how some philanthropists and society figures are spending their time and resources during the pandemic.

Where have you been hunkering down?

For the past few months, we’ve been in our townhouse in Greenwich Village. I’ve lived here my whole life, right by Washington Square. I’m still living a few blocks from where I was born. I feel that we’re lucky, but I don’t enjoy lockdown.

On April 17, you are joining Nathan Lane and the original cast of “The Producers” on the Stars in the House YouTube channel to benefit the Actors Fund. Did playing Leo Bloom have an impact on your career?

I wondered if maybe people would start thinking I’m a nebbishy accountant. You try to get superhero roles after that. But I didn’t.

Are you itching to perform again?

I miss it much more than I thought I would. I miss an audience. I miss filming, too, trying to figure out scenes, the crews, all of it. Not only that, I really miss going to shows. You realize how much you depend on it. It’s something to discuss with your friends, a place where you run into them. There’s a whole life around it that I miss.

Before the pandemic shut theaters down, you were set to appear with your wife, Sarah Jessica Parker, in a Broadway revival of Neil Simon’s “Plaza Suite.” Will you be back?

If all goes to plan, we’ll begin rehearsals around January. Last year we did the show in Boston for two weeks. The play is two people playing three married couples. We didn’t discuss it too much and it seemed to work.

What could possibly have gone wrong?

I could have seen one of us saying, “You’re messing up my laugh,” but that never happened. It sounds weird, but playing a married couple feels separate from a personal relationship. Your professional self takes over. We very much tried not to give each other a note, which I’ve learned through many years is never a good idea.

Has being sequestered brought you closer as a family?

It has, probably just by virtue of how much time we spend together, how many meals we share. We do a lot more of that than we used to. Everybody makes fun of men who do this, but I make beans. During lockdown you could either make sourdough or beans. I’ll watch somebody make something on YouTube. I’ll try anything, within reason.

Where have you been spending your time?

I’ve been in my design studio in the South Bronx. It’s not where I live, but it’s home to me. I love that I have to get up every day, go to the studio and create something. The place is full of colors, flowers and art. My fiancé, John Goodman, an interior designer, is on one side of the space working on furniture and painting vases for clients. On my side, there is a wall of sketches and drawings for my new collection.

Please tell us about the collection.

I’m in the process of relaunching my brand, 5:31. I’m making it extremely affordable and unisex, with a focus on shirting. I’ve stopped caring about trends and fame. I just want people to have real clothes again. I say: Give us a good top with some cool colors we can rock with some sweatpants, and show some individuality without being too obnoxious.

You have been called a dreamer, a maximalist. This seems like a radical shift.

I’ve always lived in a fantastical world. But who needs a ball gown right now? I’m going back to something simple, pure, that appeals to the “kidult” in me, to things that feel unpolished and are made to be that way. And I’m making art. I’ve invented a kind of anime character, Mooki. Mooki was my nickname as a child. He is an extension of me, with some magical powers, very childlike, optimistic, stylish. He’s going to have all this cool fashion he can wear, but he can also be a superhero.

Does your “kidult” turn up in other areas of your life?

I’ve created “Bronxtopia,” an art exhibition for the Bronx Children’s Museum that will open in 2022. I’ve been working with Journey Li Rice, my 4-year-old niece, to create six digital characters for the show. They’ll include a pigeon who’s an artist, a flamingo who is a rocker, a glamorous bunny and a cheetah modeled after Journey. She’ll have big puffy hair and be full of energy.

It’s been a challenging year. Has that changed you emotionally?

I know for a fact I used to be very angry at the fashion industry. I felt that I wasn’t being acknowledged. I used to be so angry at myself. I felt I wasn’t good enough. For some reason I’ve stopped worrying.

Occupation: founder and director of Performa

Where have you been sheltering?

I have not moved from my home office on East 18th Street. I’ve been fortunate that my husband, Dakota Jackson, is here. It’s a place we can spread out. We have a little garden in the back, where members of our staff come by and have coffee. We have some liberation. Sometimes we make day runs to Dia Beacon and to visit our grandchildren in Southold, N.Y.

What keeps you focused?

A sense of responsibility — that’s what’s been driving me, a sense of not letting down our community of artists and my team. I guess I look for the positive at every turn. My husband would say, I look with some denial, but a little bit of denial doesn’t hurt.

How do you operate from day to day?

I’m online every day with our small team, I can’t help myself from assigning people homework. I’m always insisting that we have these larger conversations about where we’re heading. There are lots of walks, and talks, around the block.

We built our own television studio from scratch and started broadcasting live from New York. We invited everybody who’s ever worked in performance to send in funny, clever comments about performance and we streamed it. The Cartier Foundation in Paris was about to cancel a live performance. Instead, they taped it. We put it out through our TV channel. It was a success. In real life you couldn’t possibly have seen the close connection between the sculpture, the sound and the dance.

You once said you see life as one endless eureka moment. How do you hang onto that sense of discovery?

We’ve done more studio visits, talking to artists online in ways that are very focused and in-depth. Some of the work is related to the pandemic. We talked to Ellen Gallagher in Rotterdam, for example, about how they used altar pieces in the hostels during the plague years of the 1500s.

What’s next for Performa?

Not for a moment did we think of canceling the Biennial. We moved it to October so the weather would be a little more friendly. We are trying to imagine it in two parts, live and online. We’ve commissioned works by artists including Kevin Beasley, Danielle Dean and the choreographer Madeline Hollander, a longtime collaborator of Jordan Peele. We’ll be inventive, we’ll keep going.

Interviews have been edited.