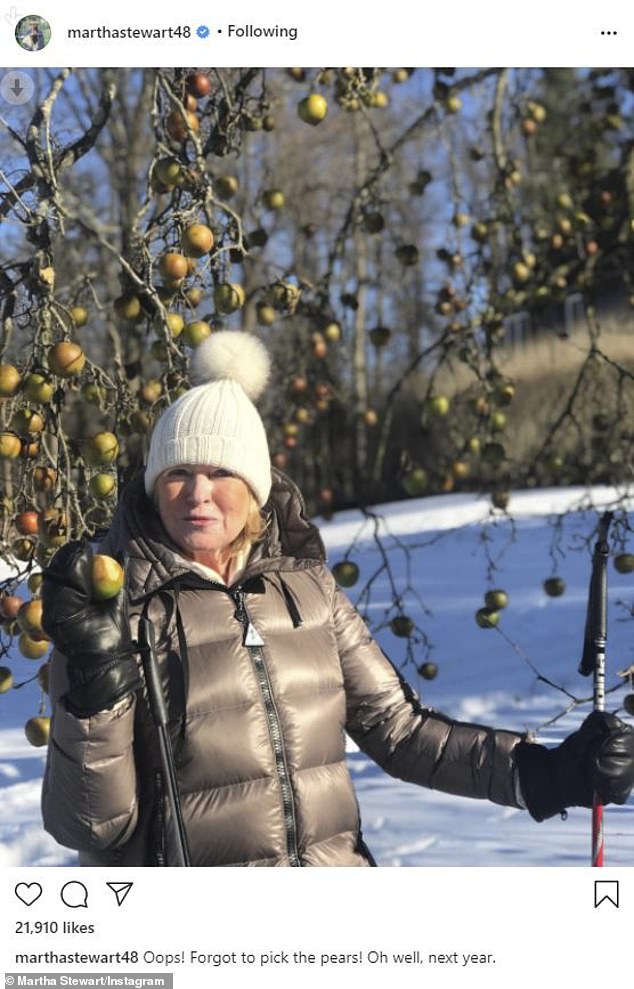 By Brian Marks For Dailymail.com

She lives in the tiny hamlet of Katonah, a little over an hour north of New York City.

And Martha Stewart was reveling in the wintry weather of her isolated home as she spent time outdoors in recent days picking pears and riding on horseback.

The 79-year-old lifestyle guru joked that she’d waited too long to pick her pears in a playful photo shared to Instagram on Thursday.

Out in nature: Martha Stewart, 79, updated her Instagram followers on Thursday as she went out picking pears by her home in New York State

She held up one of the fruits in her gloved hand while bundled up in a gray puffer coat with a white ski cap.

‘Oops! Forgot to pick the pears! Oh well, next year,’ she captioned the image.

Stewart appeared to be riding horses with her daughter Alexis Stewart and her granddaughter Jude in a photo she posted on Wednesday.

Although her family members were beaming from atop their black steeds, the TV host referenced the violent insurrection going on that day in Washington, D.C., which left four members of a pro-Trump mob dead. 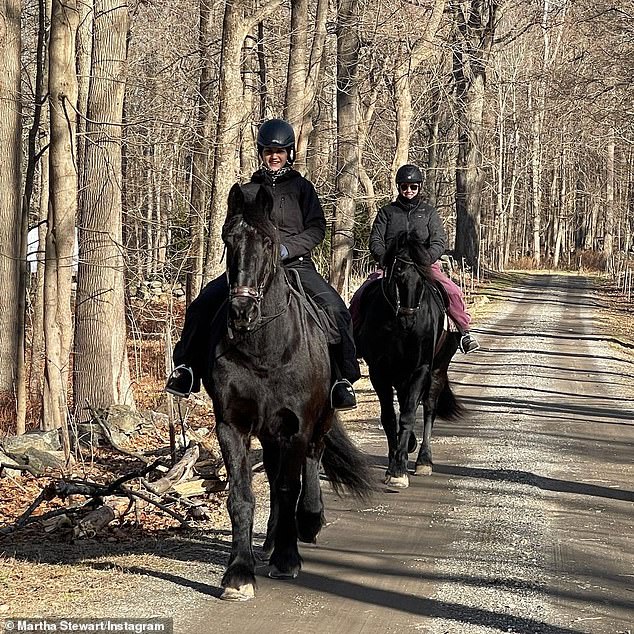 ‘Read the room’: Stewart shared a photo of her daughter Alexis Stewart and granddaughter Jude riding horses on Wednesday, but Instagram users criticized her for ignoring the violent insurrection in Washington, D.C.

‘A crisp and cold but bright and beautiful day for a ride! Rinze and Bond love this weather and want to stay out all day and night! Frisky,’ she wrote of the horses.

‘And by the way, I am as informed as any of you, but I can still find time in a day, even a day as sad and depressing as this day, to tend to farm and business and still discuss with family and friends the State of the Union!’

She seemed to be responding to multiple comments on the post criticizing her for sharing the light moment as the nation’s governing bodies were under attack.

Commenters implored her to ‘turn on the news,’ while one wrote, ‘Martha not now.’

Another user joked: ‘Do you have a crumb topping that goes well with a political coup?’

Multiple people also urged her to ‘read the room.’ 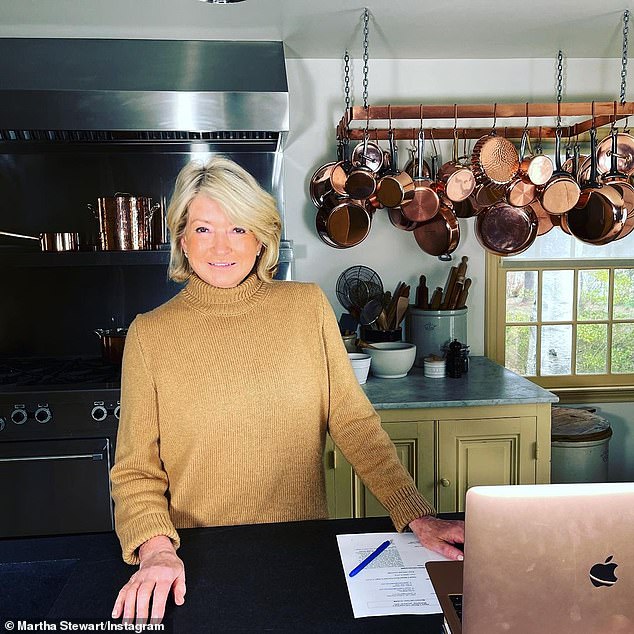 Staying in touch: One user joked, ‘Do you have a crumb topping that goes well with a political coup?’ Stewart wrote that she was ‘as informed’ as any of her followers on the ‘sad and depressing’ day 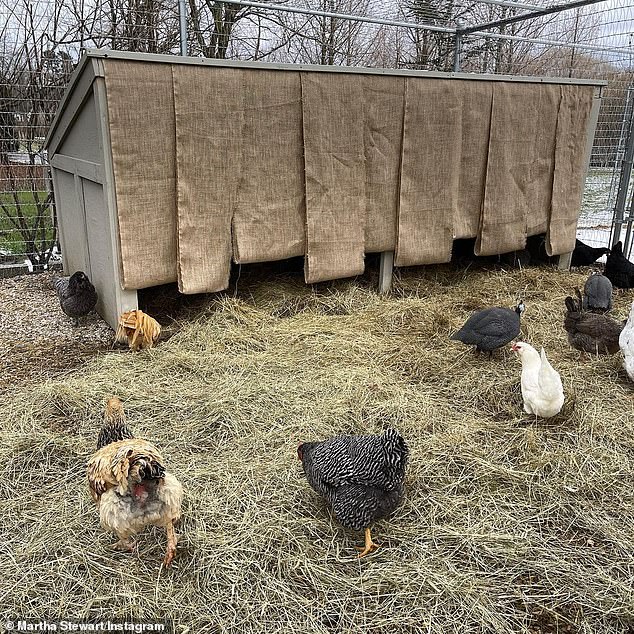 New space: She kept busy with home improvement projects, including a new shelter for her chickens 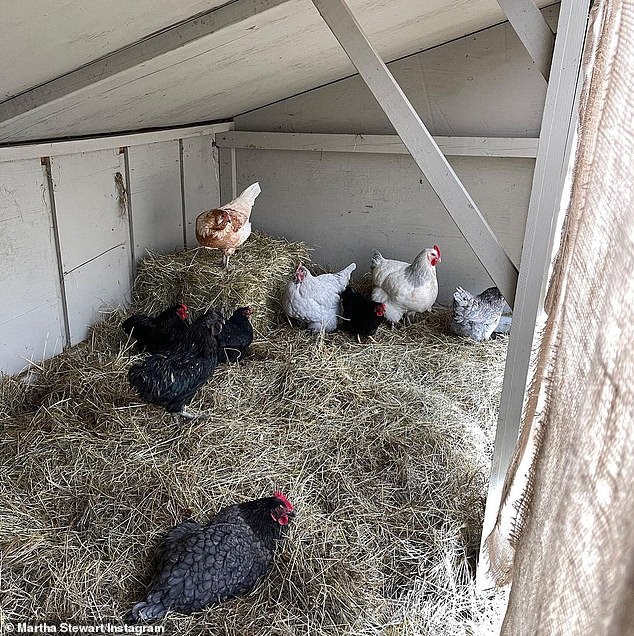 Cozy: She added new curtains to her lean-to to keep the chickens warm on windy days, while geese could congregate there at night

Also on Friday, the Martha Stewart Living publisher shared one of her home improvement projects for her livestock.

‘In celebration of the publication today of our 98th book, Martha Stewart Very Good Things I created a new “good thing,”‘ she wrote, adding that she made ‘Curtains for the large outdoor lean-to structures in the enclosed chicken yards.’

She wrote that the geese who congregated at her home would ‘have a warmer place to spend the night,’ while her chickens could ‘congregate there during cold and windy days.

‘The curtains are double layers of landscape burlap. Stapled with heavy duty staples to the top of the opening,’ she explained. 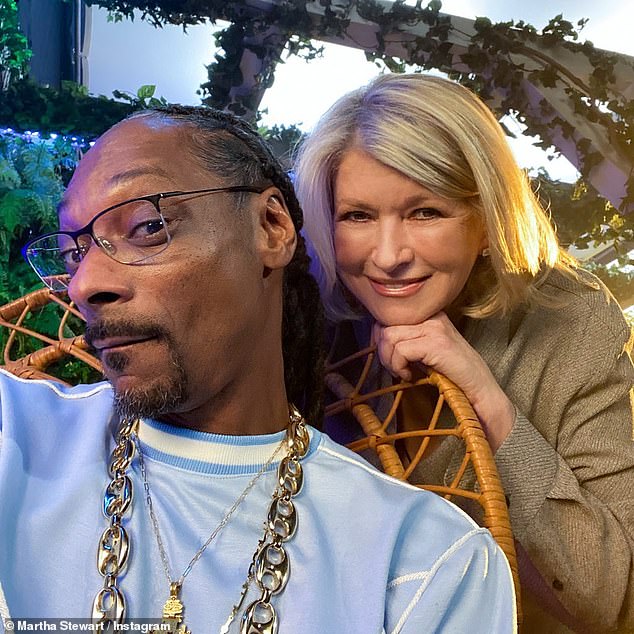 Reunited and it feels so good: Stewart has kept busy during the pandemic via virtual appearances. Last month, she and Snoop Dogg reunited to frost marijuana-shaped cookies

Throughout the ongoing pandemic, Stewart has kept busy with new shows and ventures.

Her series Martha & Snoop’s Potluck Dinner Party, which she hosts with rapper Snoop Dogg, 49, finished up its third season early last year, and last month the two teamed up again for a virtual baking class for Salesforce employees.

The two even played up Snoop’s image as a champion stoner by decorating marijuana leaf–shaped cookies.