In search of a Nice Courtroom Drama? Begin Right here 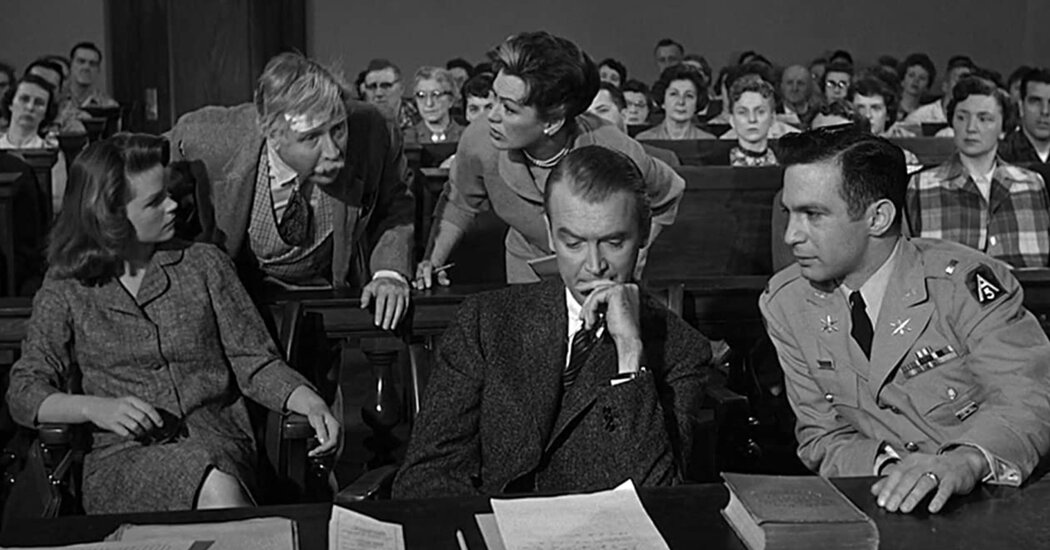 Ready-made pressure-cookers that force audiences to question their own values, American courtroom movies are practically a genre of their own. Yet even the greatest ones give in to some pretty hokey dramatic impulses. Think of Jack Nicholson’s huffing, “You can’t handle the truth!” at the end of “A Few Good Men.” Paul Newman’s closing argument to the jury in “The Verdict” mentions faith, power and the symbols of justice — and not a single fact from the case.

Otto Preminger’s “Anatomy of a Murder” (1959), one of the greatest trial movies, isn’t immune to that sort of grandstanding, but here the witness whose last-minute testimony wraps up the proceedings doesn’t neatly settle matters of guilt or innocence. By convention, courtroom films tend to tilt viewers’ sympathy toward an underdog or the wrongfully accused. But in “Anatomy of a Murder,” the defendant has indisputably committed the killing he’s accused of, and his defense lawyer is played by James Stewart — no one’s idea of an underdog, at least by the late ’50s. (He may have played one in “Mr. Smith Goes to Washington” in 1939, but was now well into the darker, postwar phase of his career.)

Even the jazz score by Duke Ellington (who has a cameo) expresses a kind of brassy ambivalence; this is not a film inclined to easily hummable melodies or triumphal orchestral swells. It’s a legal drama that trusts audiences to dwell in gray areas — what one character calls the “natural impurities of the law.”

“Anatomy of a Murder”: Rent it on Amazon, FandangoNow, Google Play or Vudu.

“As a lawyer I’ve had to learn that people aren’t just good or just bad, but people are many things,” Paul Biegler (Stewart) says late in “Anatomy of a Murder,” in a line that is as close as the movie comes to stating its animating principle. It speaks to Preminger’s audacity that the film takes an hour before the camera enters a courtroom. The first section is devoted to establishing the characters, teasing out the facts of the case and devising a legal theory that might lead a jury to believe a killing was somehow excusable.

Biegler is a small-time lawyer on Michigan’s Upper Peninsula, earning a comfortable living while the many fish he has time to catch pile up in his fridge. “I run a few abstracts and divorce Jane Doe from John Doe every once in a while,” he explains. He’s being modest: Although he doesn’t have much experience as a defense lawyer, he did used to be the district attorney. His knowledge of that office serves him well when he goes on a different kind of fishing expedition, tricking the current D.A. (Brooks West) into revealing crucial information about a polygraph test.

The case involves a Korean War veteran, Lt. Frederick Manion (Ben Gazzara), who has shot and killed a bar owner named Barney Quill. The lieutenant’s wife, Laura (Lee Remick), had told him that Barney had raped her. “I have the unwritten law on my side,” Manion tells Biegler, but Biegler explains that the “unwritten law is a myth.”

The case for letting Manion off will instead rest on a string of written legal premises. Maybe he committed murder in a dissociative state. Maybe that state meets the legal definition of insanity or maybe not. Maybe an obscure precedent from the state Supreme Court will allow Biegler to thread the needle.

Is anyone implicated in this trial not culpable in some way or other? Certainly not Frederick, who is established as an abusive, jealous husband with a violent temper. And maybe not Laura. While victim blaming is anathema today, this is a movie made in 1959, and an assistant attorney general (George C. Scott) whom the district attorney has brought in for help goes to some lengths to insinuate to the jury that the way Laura dressed and acted on the night of the crime meant that she invited what happened to her. (In his telling, she may even have been “making a play” for Quill.) Preminger has already established Laura as a firecracker who could ignite: When she first meets Biegler at his office, she really makes herself at home on the couch. And Remick, whose performance toggles between vulnerability and flirtatiousness on a dime, creates a multidimensional character who remains a marvel of ambiguity.

“Anatomy of a Murder” hardly represented Preminger’s first challenge to the Production Code Administration or to local censorship boards, both of which tried to police the subject matter presented in movies. His 1953 film “The Moon Is Blue,” a comedy deemed to have taken a scandalously flippant attitude toward sex, opened without the administration’s signoff. Preminger’s “The Man With the Golden Arm” (1955), starring Frank Sinatra, focused on a heroin addict.

Nevertheless, “Anatomy of a Murder” still packs a punch with characters frankly discussing rape, contraception and panties. The judge, Weaver, has to ask the courtroom audience not to laugh whenever the undergarments are mentioned.

While some other Preminger films of the era (“Bonjour Tristesse” from 1958 or “Porgy and Bess,” released the same year as “Murder”) used wide-screen formats like CinemaScope or Todd-AO, “Anatomy of a Murder” instead favors claustrophobic compositions that ask viewers to judge several characters’ reactions at once. Pay close attention to the questioning scenes: Preminger frequently takes care to keep the lawyer, the witness and — just a bit further in the background — the judge in focus simultaneously.

About that judge: To the extent that there is a clear crime in “Anatomy of a Murder,” it is the scene stealing of Joseph N. Welch in the role. Amazingly, he wasn’t an actor at all: Welch is better known as the special counsel for the Army in the Army-McCarthy hearings of 1954, in which he gave Joseph McCarthy a dressing-down that contemporaneous audiences might have freshly remembered from television: “At long last, have you left no sense of decency?”

After meeting with the lawyers from both sides in his chambers, Judge Weaver delivers a line of the ages of his own: “Skirmish over. Shall we join now on the field of battle?”