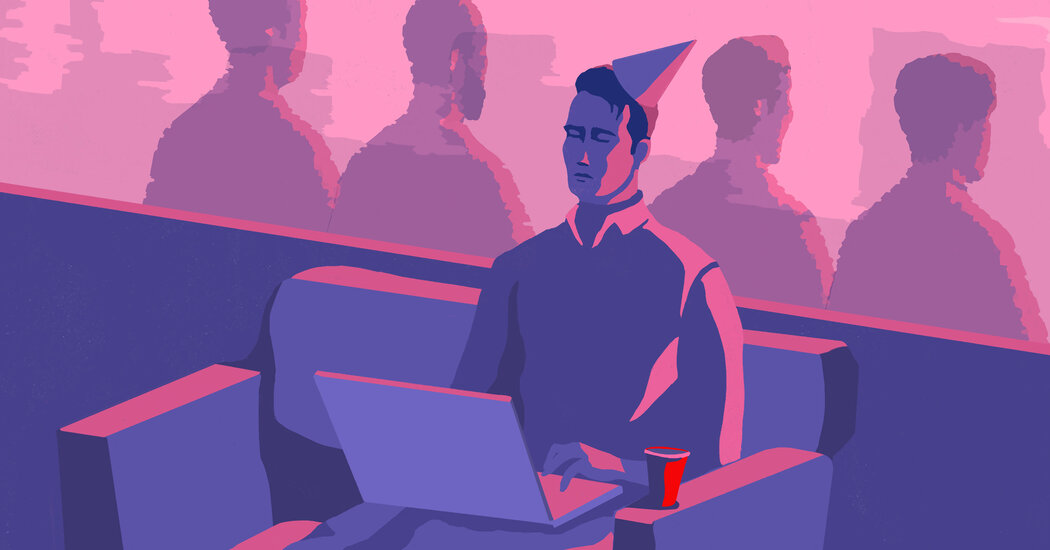 WE NEED TO HANG OUT
A Memoir of Making Friends

In one sense, the journalist Billy Baker has undertaken a self-defeating task: to cure his loneliness by writing a book. He could’ve made a documentary — seems more social — but instead he’s chosen one of the loneliest professions, involving endless days of solitary confinement in a room with your keyboard and self-doubt, to try to reconnect with friends.

Still, Baker manages to pull it off, mostly. When not typing at his desk alone, he speaks to psychologists, goes on male-bonding trips and tries to embrace his vulnerable side. The result is “We Need to Hang Out,” an entertaining mix of social science, memoir and humor, as if a Daniel Goleman book were filtered through the lens of Will Ferrell.

Baker, a middle-aged dad and Boston Globe writer, starts with the thesis that we’ve been in the midst of a loneliness crisis — even before Covid. “In the 21st century,” he writes, “loneliness has become an epidemic.” He cites a 2019 survey that found 61 percent of Americans are officially lonely, according to the “gold standard” U.C.L.A. Loneliness Scale.

As the sociologist Robert Putnam put it 20 years ago, we are increasingly “bowling alone.” This is not a trivial problem. “Loneliness kills,” Baker writes. It’s a public health threat linked to shorter life spans, heart disease, obesity and Alzheimer’s.

So how, as a society, did we lose so many friends? Social scientists point to several culprits: Fewer of us join civic or community organizations like the Kiwanis or the Elks. We are less likely than previous generations to attend churches, synagogues or mosques. We are prone to overworking, overscheduling and overparenting.

Social media was supposed to connect us, but has turned out to be a poor substitute for in-person contact. Then came Covid. Now even bowling alone is risky.

In the pre-Covid era, Baker embarks on several adventures to try to revive his withering friendships. He goes on a treasure hunt in Montana with his college buddies. He starts a sort of grown-up frat house, where he and his pals can hang out, drink beer and watch hockey. He tries to resurrect his high school’s Senior Skip Day and persuade his friends to skip work to meet in the park.

Baker is a self-described “guy’s guy,” and his style is appropriately casual, as if he were chatting with us at a tailgate party while holding a Solo cup filled with Miller Lite. For instance, the psychiatrist and scholar Richard Schwartz is described as “a good dude.” Or, of his road trip, he writes: “The car stank like fast food and farts. It was all so stupid. … I miss stupid. I need stupid.”

Baker spends most of the book talking about male friendship, which he says is fundamentally different from its female counterpart: Where women gossip conspiratorially about others not present, men prefer “ball busting” in person. “Women talk face-to-face. Men talk shoulder to shoulder,” he writes. “Barstools and box seats are designed for it.” Men compete; women like to cooperate. Men, Baker argues, are more competitive and have more boundaries. “Planes, elevators and urinals are off-limits for chatting with other men,” Baker writes. “Just pretend they’re invisible. (See: guys, unwritten rules.)”

It’s all very Mars versus Venus.

Maybe the research backs up these stereotypical differences — I’m not an expert on the literature. But I would have liked to read more about inter-gender friendships. At one point, Baker says that some of his closest friendships are with women, but he doesn’t write much about it.

I would have also liked a deeper dive into the loneliness crisis’ effect on female friendships — which, in fairness, does get at least one chapter (Baker goes on a cruise for the mostly female fans of the ’90s boy band New Kids on the Block).

And finally, I’d love to read more about the complex effects of technology on our interpersonal communication. Yes, our laptops have isolated us in some ways. But they’ve also spawned passionate communities, for better and worse. Often worse — I’m sure many QAnon folks have formed friendships over their shared fantasy that Bill Gates plans to microchip us all.

Over all, though, Baker is an energetic writer and this is an important topic. Plus, the book inspired me to initiate a Zoom lunch with a college friend. Not quite bowling, but a welcome break from sitting alone writing my book. Also I don’t like bowling.