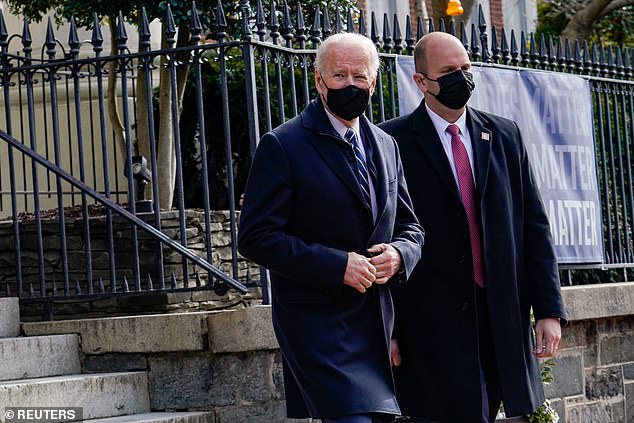 The Biden administration faced a grilling over its $1.9trillion coronavirus spending package on Sunday with senators from both parties calling for more targeted relief.

Senators including conservative Democrat Joe Manchin and Republican moderate Susan Collins were among those on the 75-minute call with top Biden officials amid pressure to strike a deal before Donald Trump‘s second impeachment trial.

Collins said it ‘seems premature to be considering a package of this size and scope’, adding that she would try to rally the senators to ‘come up with a more targeted package’.

Her fellow Maine senator Angus King, who caucuses with Democrats, also voiced doubts about the cost and said the $1.9trillion was not ‘Monopoly money’, according to Politico.

President Biden, pictured leaving church in Washington on Sunday, is pushing to pass a virus relief package after long touting his abilities as a bipartisan dealmaker

The pandemic has killed more than 400,000 people in the US and thrown millions out of work, and Biden campaigned on a promise to aggressively tackle the crisis in contrast to Trump’s half-hearted response.

Biden has long touted his skills as a bipartisan dealmaker after a decades-long career in the Senate, but his former rival Bernie Sanders has warned that Democrats may need to push through a spending package without Republican help.

A three-fifths majority of 60 Senate votes is normally needed to advance legislation without a filibuster, and Democrats currently have 50 seats.

But Sanders suggested Democrats might use a procedural step known as budget reconciliation to push the $1.9trillion through with a simple majority.

‘What we cannot do is wait weeks and weeks and months and months to go forward,’ Sanders said, saying he did not have high hopes for negotiations.

But King said Sunday’s summit was a ‘serious effort’, joking that ‘if they were just trying to jam this through, I don’t think it would have interrupted the Packers game’.

There was no discussion of budget reconciliation in the meeting, King said, adding: ‘That didn’t come up today explicitly but that’s sort of in the background.’

He added that there was ‘absolute consensus’ among the group that the main priority was to speed up vaccine distribution and test-and-trace efforts. 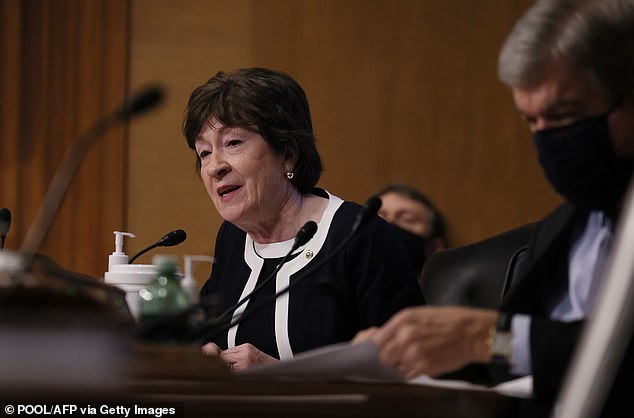 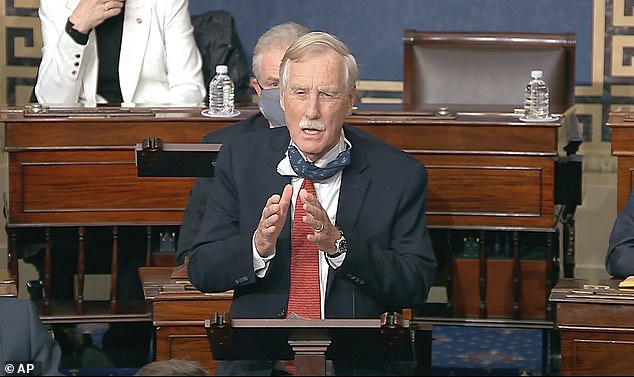 Angus King (I-ME) said Sunday’s summit was a ‘serious effort’, joking that ‘if they were just trying to jam this through, I don’t think it would have interrupted the Packers game’

Senators from both parties raised questions about the economic aid provisions, particularly making direct $1,400 payments to Americans more tailored to recipients based on need.

Democrat Jeanne Shaheen of New Hampshire said there was consensus that ‘the more targeted the aid is the more effective it can be’.

‘It was a conversation and it was not about drawing lines in the sand,’ Shaheen said. ‘It was about how can we work together to help the people of this country.’

However, the White House did not seem to budge on breaking up the package or reducing the overall price tag, even as it pushes for bipartisan support.

Pressed on whether Biden will hold out for bipartisan agreement, hischief of staff Ron Klain said the administration does want to see the proposal passed quickly, but that engaging both sides is not the ‘enemy’ of speed.

‘We’re reaching out to people,’ Klain said. ‘I don’t think bipartisanship and speed are enemies of one another. The need is urgent.’

‘If we get beyond Covid, I believe that the economy is going to come roaring back,’ the Republican senator told Fox News on Sunday.

‘Spending and borrowing trillions of dollars from the Chinese, among others, is not necessarily the best thing we can do to get our economy to be strong long-term.’

Democratic senator Dick Durbin said he was hopeful for a show of bipartisanship in the Senate.

‘The object is trying to see if there’s an area of agreement we can launch when it comes to this rescue package,’ he said on NBC’s Meet the Press.

Many of the senators on the call were from a bipartisan group that struck the contours of the last Covid-19 deal approved late last year.

They were joined on the call by the two leaders of the House’s so-called Problem Solvers Caucus, Democrat Josh Gottheimer and Republican Tom Reed, who were also part of earlier discussions. 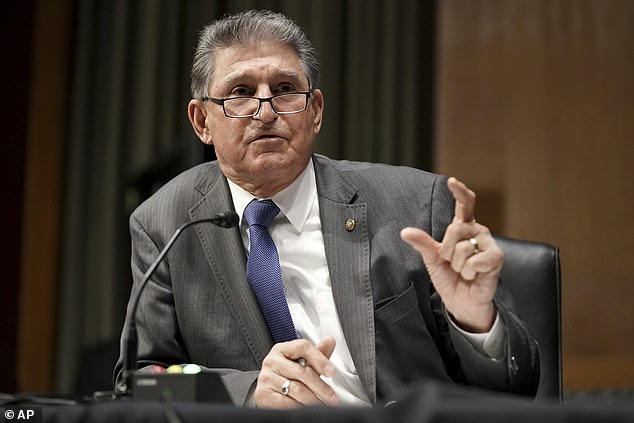 Joe Manchin (D-WV) was among the Democratic lawmakers on the call as Biden tries to push through $1.9trillion of relief

‘We’re going to continue to push because we can’t wait,’ said White House principal deputy press secretary Karine Jean-Pierre. ‘Just because Washington has been gridlocked before doesn’t mean it needs to continue to be gridlocked.’

The 46th president has called for immediate relief as the pandemic continues to spiral, and has already signed executive orders on food aid and unemployment.

But some Biden advisers have watched with worry as the Senate was immediately beset by procedural wrangling over a power-sharing agreement in the evenly-divided chamber.

The partisan rancour of the Trump years is set to be renewed during the former president’s impeachment trial, which is due to begin in two weeks.

Many working on the virus relief package hope to approve it before Washington’s attention is diverted back to Trump.

The Democratic-controlled House impeached Trump for a historic second time earlier this month after he incited a mob to invade the Capitol on January 6.

A two-thirds majority would be needed to convict Trump, which could in theory lead to him being disqualified from running for office again in 2024.