Home WORLD In Tunisia, Some Surprise if the Revolution Was Price It
WORLD

In Tunisia, Some Surprise if the Revolution Was Price It 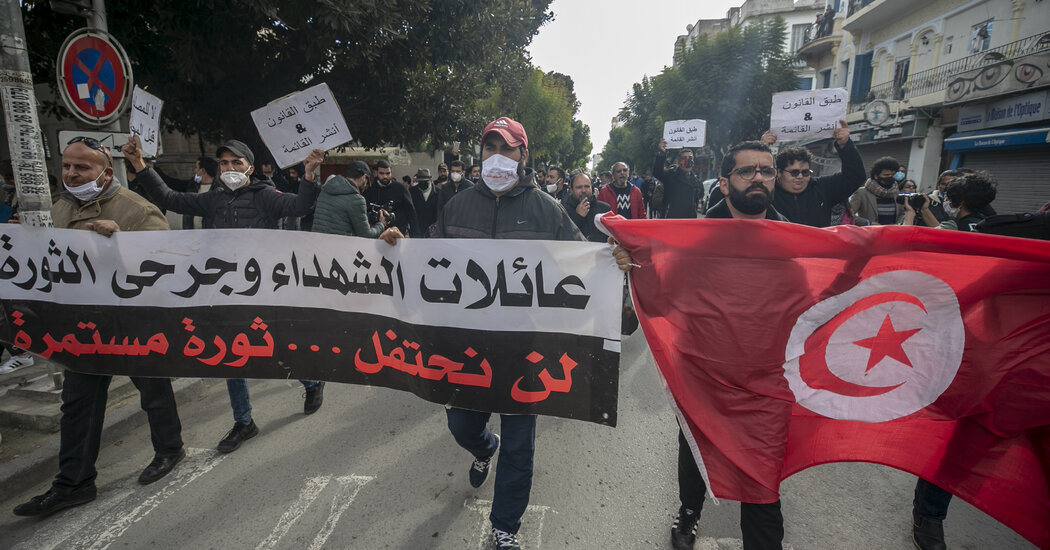 TUNIS — It felt like an echo of the wildfire protests that brought down Tunisia’s dictator, leading to a series of revolts that ripped across the Middle East 10 years ago: young people in the streets of more than a dozen Tunisian cities over the last three nights. Fury that corruption seemed to be everywhere, jobs nowhere. Clashes with security forces led to more than 600 arrests by Monday.

Only this time, the endgame was unclear.

Tunisia’s dictatorship is long gone. Its president, Zine el-Abidine Ben Ali, fled the country in January 2011 after a brutal 23-year rule, the first strongman to fall in the Arab Spring revolts that began in Tunisia and surged across the Middle East. Ten years later, Tunisians have built a democracy, however dysfunctional, complete with elections and — that rarest of Arab commodities — the right to free speech.

So it is that the protests, strikes and sit-ins seem to almost never stop. Graffiti gleefully denounces the police. Bloggers and citizen journalists howl about official mismanagement, heap scorn on political opponents and lob corruption allegations against government officials high and low, their Facebook posts then shared and amplified by thousands of fellow Tunisians.

But none of it has righted an economy heading for shipwreck. Nearly a third of young people are jobless, public services are foundering and corruption has increasingly infiltrated daily life. Opportunities for most people have become so scant, especially in Tunisia’s impoverished interior, that least 13,000 Tunisian migrants gambled their lives crossing to Italy by boat just in the last year.

“The only positive thing we got out of the revolution was the freedom to say anything we wanted,” said Ayman Fahri, 24, a trade student who said he wanted to leave Tunis, maybe for Turkey, because of the lack of opportunities at home. As for the rest of democracy, he said, “Maybe we understood freedom wrong, because we’ve made no progress in the last 10 years.”

Thanks to deadlock in its post-revolutionary parliamentary system, Tunisia has torn through new governments at a rate of one per year, and three in just the last 12 months. Political parties dominated by wealthy businessmen shuffle and reshuffle power — occasionally coming to actual blows in Parliament — while making little headway on economic reforms.

As faith in politics has dwindled, so has voter turnout. Over the course of Tunisia’s seven free elections, participation has fallen from a high of 68 percent in the 2014 parliamentary elections to 42 percent in 2019.

“Why did we revolt?” said Ines Jebali, 23, a sociology student. “Everything changed for the worse.”

Without prompting, Ms. Jebali, like Mr. Fahri, acknowledged one exception. At least, she said, there is now freedom of speech — though even that is occasionally threatened, with security forces beating demonstrators and prosecutors frequently hauling bloggers into court on charges of defaming public officials.

“With today’s democracy, they may not be able to eat,” said Sihem Bensedrine, a longtime activist, who as head of Tunisia’s truth and dignity commission investigated previous regimes’ abuses and corruption. “But they have the freedom to fight for what they want.”

On that front, outraged Tunisians have no louder bullhorn than Abir Moussi, a former official in Mr. Ben Ali’s party who has reinvented herself as one of the country’s most popular politicians by spotlighting the decline in public services, vowing to restore what she says was Tunisia’s prosperity under the former president and outright denying that a revolution ever happened.

Just after the downfall of Mr. Ben Ali, his regime was so tarnished that Ms. Moussi got her hair pulled as she defended his party in court. Now, her Free Destourian Party leads the polls, and some analysts fear that her populist appeal, which mixes Ben Ali-era nostalgia with proposals to strengthen the presidency and security forces, could push Tunisia back toward authoritarianism.

“Those who criticize us do so to hide their own failures,” she said in a recent interview, maintaining that she supports checks on the presidency to prevent an authoritarian relapse. “The average Tunisian now finds himself worse off than he was before.”

Most of the time, she is short on evidence. But she speaks for many Tunisians who revolted for better lives, not access to the ballot box.

“Under Ben Ali, everything was honey,” said Basama Benzakri, 42, a secondhand clothing vendor who had to take a second job as a supermarket security guard to feed his two children last year.

He had warm words for Ms. Moussi, too.

Tunisia’s future may depend on whether young Tunisians come to see their hard-won rights, not a strong ruler, as the best route to putting bread on the table.

Take Haythem Dahdouh, 31, a law school graduate who sat one recent afternoon at a cafe in Zaghouan, an hour inland from Tunisia’s wealthier coast, because he had nothing else to do. Friends of his were better off, he said, though not by much: a trained accountant could find work only on a factory floor, a law school classmate at a call center.

“I have experience in unemployment,” he joked.

“That’s out of the question,” he said. “You can fight corruption now. Under the old regime, there was no way.”

Still, Mr. Dahdouh said, there was only one organization seriously working to fight corruption: I-Watch.

If Tunisians now have the freedom to gripe, lament, squabble and vilify, so too can they blow the whistle or openly advocate for human rights, then publicize it in the press.

In the heady days after the revolution, social justice nonprofits and Parliament watchdogs proliferated by the thousands. But none became as famous as I-Watch, an anticorruption group founded in 2011 by a few university students that has gone on nearly single-handedly to land exposé after exposé targeting powerful government and business leaders.

Their early efforts were on the raggedy side of scrappy. To promote one initiative, they resorted to middle-of-nowhere billboards (all they could afford), some street graffiti (courtesy of a friend) and a rap song in praise of whistle-blowers (it never topped 12,000 views).

Last month, however, I-Watch scored its biggest coup yet with the second arrest of Nabil Karoui, a former top presidential contender, on money laundering and tax evasion charges.

I-Watch’s investigation so incensed Mr. Karoui that he was recorded in a leaked 2017 audio clip plotting to use the television channel he owns to smear the group’s founders, whom he has called “four kids,” as traitors and American spies. The move backfired: The clip went viral. Nearly half of Tunisians now know of I-Watch, according to polls.

But its founders say uncovering corruption is no longer enough. Their new goal is nothing less than reforming Tunisia’s entire political culture.

“I’ve lost hope in the political elite,” said Mouheb Garoui, 34, one of the founders. “We need to start working on the political education of younger people. Why not see young people run in 2024? If we just keep fighting corruption, it’s never going to end.”

The group is starting its own radio station and digital media outlet, hiring young YouTube, Instagram and TikTok influencers with millions of followers to create content about accountability and political rights. Like other youthful Arab media start-ups, including the Tunisian investigative journalism collective Inkyfada and Lebanon’s Megaphone, it aims to circumvent traditional media outlets, which tend to be owned — and muzzled — by powerful businessmen.

“Civil society usually preaches to the converted, to the elite,” said Achref Aouadi, 35, another I-Watch founder. “We want to be consumed by millions, by the masses.”

He can be confident the audience is there. After all, young Tunisians, unlike their elders, have grown up taking for granted the right to consume whatever they want.

The N.F.L. on Tuesday sent a memo to all 32 teams effectively mandating that support personnel including coaches and trainers be vaccinated against...
Read more
WORLD

U.S. plans full Afghan withdrawal by Sept. 11 President Biden has decided to pull out the remaining U.S. troops from Afghanistan by the...
Read more