Home NEWS ‘I Answered the Name of My President’: Rioters Say Trump Urged Them...
NEWS

‘I Answered the Name of My President’: Rioters Say Trump Urged Them On 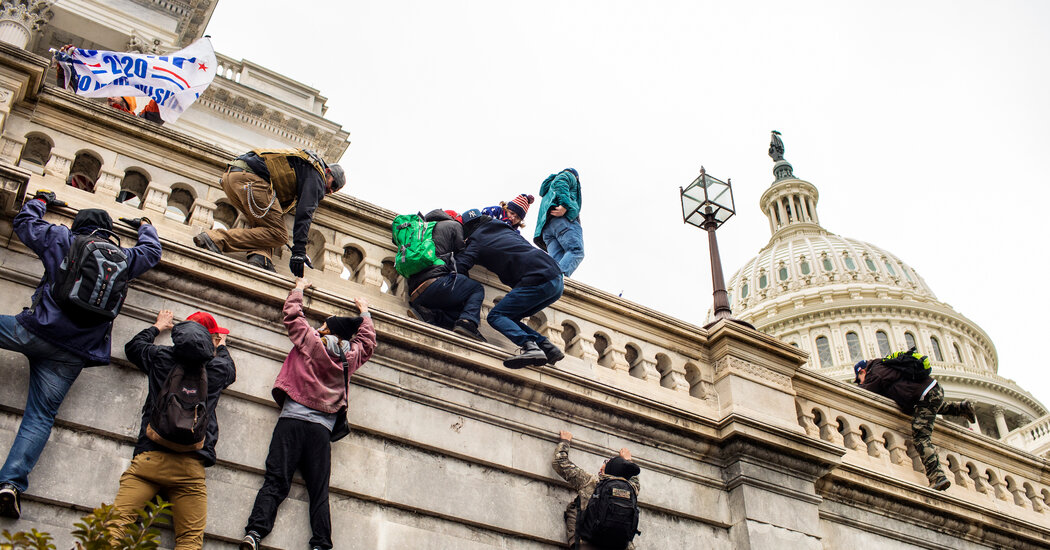 In the two weeks since a raging mob stormed the Capitol, President Trump has shown no sign that he believes he shares responsibility for the worst incursion on the halls of Congress in more than two centuries. Shielding him further, his loyalists have started shifting blame for the attack to an array of distracting bogeymen: far-left anti-fascists, Black Lives Matter activists, even vague conspiracies of a setup involving Vice President Mike Pence.

But one group of people has already come forward and directly implicated Mr. Trump in the riot at the Capitol: some of his own supporters who were arrested while taking part in it. In court papers and interviews, at least four pro-Trump rioters have said they joined the march that spiraled into violence in part because the president encouraged them to do so.

In the past few days, a retired firefighter charged with assaulting members of the Capitol Police force told a friend he went to the building following “the president’s instructions,” according to a criminal complaint, and a Texas realtor accused of breaching the building told a reporter that by protesting in Washington, she had “answered the call of my president.”

A Virginia man has told the F.B.I. that he and his cousin marched on the Capitol because Mr. Trump said “something about taking Pennsylvania Avenue.” And a lawyer for the so-called QAnon Shaman — who invaded the building in a Viking costume — said that Mr. Trump was culpable, and he planned to ask the White House for a pardon.

“Does our president bear responsibility?” the lawyer, Al Watkins, told The New York Times. “Hell, yes, he does.”

The nationwide dragnet for those accused of breaking into the Capitol is only in its early stages, and it is likely to take weeks until the full scope and contours of the investigation are known. But with dozens of people now in custody and starting to appear in court, the accounts they give about Mr. Trump could end up not only as fodder in criminal proceedings but also at an impeachment trial to bolster charges that the president incited the assault.

On Wednesday, Mr. Trump was impeached for a second time after the House voted to approve a single charge, citing his part in whipping up the mob that descended on the Capitol on Jan. 6 after attending a rally where Mr. Trump and his allies repeated his baseless assertions that the election was rigged against him. He now faces a trial in the Senate that could disqualify him from future office.

While it would be unusual if any of the defendants charged in the Capitol attack were called as witnesses in the impeachment drama, it is possible that Democrats could cite statements about Mr. Trump that those defendants have made in public or to investigators.

At the very least, the emergence of a “Trump-made-me-do-it” defense could serve to undercut the baseless narrative by some of the president’s congressional allies and his personal lawyer, Rudolph W. Giuliani, who have sought to push the story that outside agitators or disloyal servants were responsible for the Capitol attack.

As the criminal cases stemming from the riot move through the legal system, they also could put some of Mr. Trump’s most ardent followers in the awkward position of having to publicly lay blame at the feet of the man they came out to support.

The approach is formally known as a public authority defense, and in using it, lawyers can try to argue that their clients are not guilty because a government official permitted them to commit the crimes.

Legal scholars have questioned the viability of the defense in the case of the Capitol breach, noting that anyone who seeks to blame Mr. Trump for their part in the assault would have to prove not only that they believed he had authorized their actions, but also that such a belief was reasonable.

But even if trying to offload responsibility onto Mr. Trump may not be effective at a trial, it could ultimately help lighten the punishment for anyone convicted of a crime in connection with the attack, said Judith P. Miller, a law professor at the University of Chicago.

“The fact that our country’s highest leader is promoting this grand lie and giving millions of people a sense of righteousness, and that they’re on the side of the angels, that seems like it could be potentially strong mitigating evidence,” Ms. Miller said.

Mr. Trump began promoting his Washington event well before it happened, urging his allies to join him for a speech outside the White House. During the address, attended by thousands, he told the crowd “to walk down to the Capitol” where Congress, overseen by Mr. Pence, was certifying the final count of the election results.

“You’ll never take back our country with weakness,” he admonished the throng. “You have to show strength, and you have to be strong.”

Shortly after Robert Sanford, a retired firefighter from Boothwyn, Pa., heard those words, he joined the growing mob that was marching on the Capitol. There, federal prosecutors say, Mr. Sanford heaved a fire extinguisher at a group of police officers, striking and injuring three of them.

When Mr. Sanford got home, according to a criminal complaint filed last week, he told a friend he had gone to Washington to hear Mr. Trump, then “followed the president’s instructions” and moved on to the Capitol.

His lawyer, Enrique Latoison, said in an interview with The Times that he was still exploring whether blaming Mr. Trump for Mr. Sanford’s alleged role in the attack would work in front of a judge.

“You’re being told, ‘You gotta fight like hell,’” Mr. Latoison said. “Does ‘fight like hell’ mean you can throw stuff at people? Maybe.”

Mr. Latoison noted that the only reason Mr. Sanford was in Washington at all was because of Mr. Trump. “That man wouldn’t have been there if it wasn’t for the president,” he said.

When Jennifer L. Ryan flew from Texas to Washington on a private plane with friends, she did so, as she later told a reporter, because Mr. Trump “asked us to go.”

“He said, ‘Be there,’” Ms. Ryan explained. “So I went and I answered the call of my president.”

Not long afterward, prosecutors say, Ms. Ryan, a real estate agent from a Dallas suburb, posed for a photograph in front of a broken window at the Capitol and then illegally entered the building through its Rotunda entrance. In a now-deleted Facebook video, court papers say, she could be heard joining the trespassing crowd inside shouting, “Fight for freedom!” and “This is our house!”

Another video emerged on Sunday of the mob inside the building confronting the Capitol Police, while one man yelled at the officers that he and his fellow rioters were there because they were “listening to Trump, your boss.”

That, in essence, was the argument that Mr. Watkins, who is based in St. Louis, plans to make as he begins his defense of the QAnon Shaman, a Phoenix man whose real name is Jacob Chansley.

Mr. Chansley, an unemployed actor who has made a name for himself in recent weeks by turning up at pro-Trump rallies in face paint, a horned battle helmet and a six-foot spear, was charged with breaking into the Senate chamber and leaving a note for Mr. Pence that read, “It’s only a matter of time, justice is coming.” On Friday, a federal judge in Arizona ordered him detained pending trial, saying he was “an active participant in a violent insurrection to overthrow the U.S. government.”

Mr. Watkins did not deny that Mr. Chansley was inside the Capitol that day, but suggested he had gone there because he, like others, “hung on the words of the president” for comfort and guidance. “What you’ve got here are people like my client who take the president seriously,” Ms. Watkins added, “and look to him to make them feel relevant in a system that has made them feel neglected.”

That is why Mr. Watkins plans in the coming days to ask Mr. Trump to pardon Mr. Chansley, comparing him and the others at the Capitol to cult members.

“They were betrayed by somebody in whom they’d placed their faith,” Mr. Watkins said. “They’re like the followers of Jim Jones. The only thing missing was the Kool-Aid.”

NEW YORK: President Joe Biden pledged to “do more” to address gun violence and implored Congress to act after a mass shooting in...
Read more
NEWS

April 13, 2021Dear Fellow Brearley Parents,Our family recently made the decision not to reenroll our daughter at Brearley for the 2021-22 school year....
Read more