He Introduced Moynihan Practice Corridor to Life, however Didn’t Stay to See It 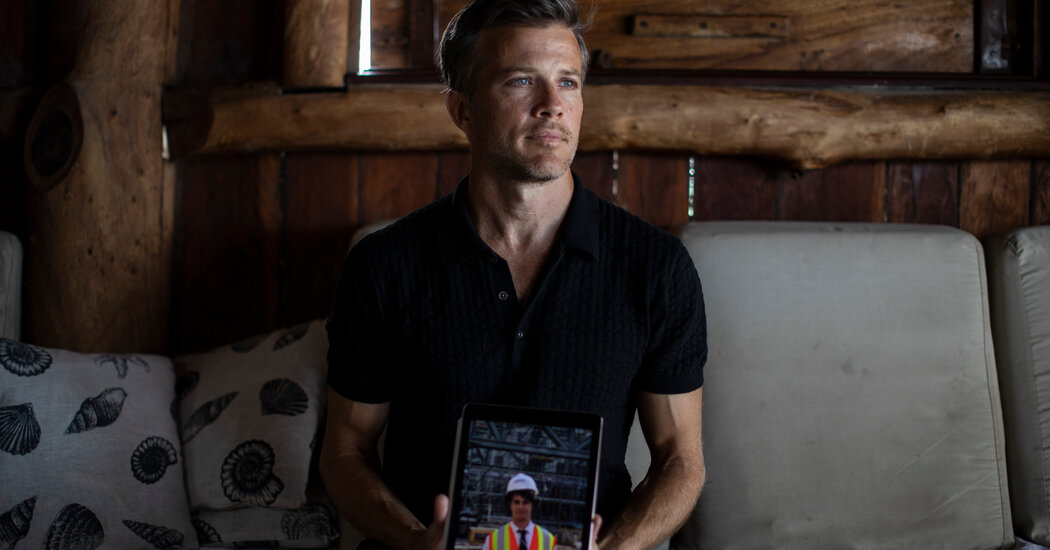 When the Moynihan Train Hall was unveiled to the public this month, it was hailed as one of New York’s most important public works projects in recent memory, a symbol of the city’s resilience through one of its darkest years. New Yorkers marveled at the acre of glass splashed across its 92-foot-tall atrium and the century-old steel trusses holding the large skylight in place.

But looming over the opening was a story of private tragedy.

For nearly a decade, one man, Michael Evans, had quietly shepherded the project to transform the historic Farley Post Office Building into a stately extension of the much-maligned Pennsylvania Station.

Though out of public view, Mr. Evans’s work would come to define the new hall and help ensure its legacy as one of New York’s architectural jewels, his colleagues say.

As project manager, he fought to preserve original steel trusses, brought in installations from world-renowned artists, traveled to a quarry in Tennessee to choose the best marble and paid his own way to Germany to personally inspect the glass that was manufactured for the large atrium.

But Mr. Evans, 40, never saw the product of his painstaking work. Nearly 10 months before the Moynihan Train Hall officially opened, he took his own life.

It is impossible to know what drives a person to suicide. But in his final months, his mental state took a turn for the worse as pressure grew to finish the project and stress mounted over costs, according to dozens of interviews with friends, family and colleagues.

“Everyone who knew how much of his heart and soul he put into it, down to the tiniest details, will always go in there and feel Michael’s presence,” said Holly Leicht, an executive at Empire State Development, the state’s economic development agency, which oversaw the project.

Like generations of wide-eyed transplants before him, he was hooked by the promise and possibility of New York from the moment he moved to the city.

Born in Cali, Colombia, and raised in Dallas, he landed in New York after studying history at the University of Sydney and earning a master’s degree in international relations from Oxford University in England. A floppy-haired idealist with an athletic build and a natural charm, Mr. Evans met another American student at Oxford, Brian Lutz, and fell in love.

After Mr. Evans graduated in 2005, he and Mr. Lutz moved to New York. As Mr. Evans bounced between temporary jobs, he took daylong bike rides through the boroughs and ventured to far-flung neighborhoods.

“There was never a neighborhood we went to where his curiosity didn’t come alive,” said Christopher Rizzo, a friend who accompanied him on these outings. “He was fascinated by urban design and thought it was a tragedy that so much of what we have built in New York has been so subpar.”

Two years later, Mr. Evans landed a job in state government as a special assistant for infrastructure and economic development. He worked on projects involving New York’s transit agency and the first congestion pricing proposals for tolls in parts of Manhattan, earning a reputation for his confidence and ability to build consensus, former colleagues said.

But of all the initiatives on his docket, he was particularly fascinated with the Moynihan Train Hall. A brainchild of former Senator Daniel Patrick Moynihan, a powerful New York lawmaker known for his imaginative solutions to urban problems, the hall was proposed as a way to ease congestion in Penn Station, the busiest train hub in North America.

Converting the neighboring, century-old Farley building into a train hall would divert foot traffic and restore some grandeur to one of the city’s gateways, making amends for the destruction of the original, majestic Penn Station in the 1960s.

For nearly 20 years, the idea had teetered between a pipe dream and viable reality. But by the time it landed on Mr. Evans’s plate in 2008, it had begun to pick up steam.

In 2011, Mr. Evans turned his focus to the train hall full time as deputy director of the Moynihan Station Development Corporation and set up shop in the postmaster general’s old office suite, where wood paneling provided a glimmer of the structure’s former glory.

By then, the rest of the building’s interior had fallen into disrepair. There was no working bathroom. Dark rings from water damage stained the ceilings. A thick layer of grime coated nearly every surface. But where most saw a dump, Mr. Evans saw possibility.

Without a budget to maintain the building’s historical integrity, Mr. Evans rented out the space for flashy events like film shoots and shows during New York Fashion Week, raking in millions of dollars.

At the same time, he pushed ahead with design plans for the grand hall with meticulous detail, corralling private sector partners, railroad officials, and state and city officials around a shared vision of a space that offered a nod to its treasured past and future needs.

“That was a critical part of Michael’s approach: celebrating its history while making sure it was a 21st-century building,” said John D. Porcari, deputy secretary for the federal Department of Transportation, who worked on the Moynihan project. “It showed that the right person with a sense of history at the right time can really, truly make a difference.”

Mr. Evans made a pilgrimage to the ancient Roman Baths of Caracalla, which influenced the design for the original Penn Station, to draw inspiration. He insisted on using marble from the same quarry that supplied Grand Central Terminal, obsessed over how much light should be refracted through the glass skylight and hand-selected every shade of gray paint used.

By the time Mr. Evans became president of the Moynihan corporation in 2013, the train hall had transformed from a mere project to his life’s work.

Around the same time, the project earned the full backing — and arm-twisting might — of Gov. Andrew M. Cuomo, who has sought to carve out a legacy for bold infrastructure developments. In 2017, a construction team broke ground on the train hall with the ambitious goal of finishing the project in just three years.

Suddenly, a vision Mr. Evans had nurtured for nearly 10 years was guaranteed a reality. But the pressure of finishing the project on time and on budget slowly gnawed at him.

He stopped riding his bike, visited the construction site nearly every weekend, spent vacations glued to his phone on work calls and looked increasingly worn down, according to friends and family members.

Still, friends described Mr. Evans as having a hard time asking for help, and he rarely spoke about how the project demands were affecting him, leaving him to deal with the stress by himself. A perfectionist, Mr. Evans also tended to be unduly harsh on himself and agonized over every setback and perceived misstep, his partner, Mr. Lutz, said.

“Beneath all of his calm, the charming exterior, was someone who struggled with self doubt,” Mr. Lutz said. “I was always just seeing the tip of the iceberg, and I knew that.”

In fall 2019, Mr. Evans’s mental state took a turn for the worse as he juggled state officials’ last-minute requests, like the addition of a 12-foot-tall clock that hangs from the atrium, and heightened pressure to complete the whole project no later than Dec. 31, 2020.

Officials believed that completing the train hall on time would inspire public confidence in the state’s ability to carry out large infrastructure projects without racking up costly delays, said Doug Carr, executive director of the Moynihan corporation.

Doing so would also allow state officials to hold an end-of-year grand opening — much like the inauguration of the Second Avenue subway, which Mr. Cuomo celebrated with a New Year’s Eve bash, some people involved in the project said.

Mr. Evans scrambled to speed up the work, pushing the project tens of millions over budget and making him fear that he would be held personally responsible for the mounting costs, according to friends and notes he left for his partner and boss.

“The tension had become nearly disabling,” said Carrie Evans, his sister. “He felt the enormity of the project sat on his shoulders alone.”

His friends tried to convince him that it was normal for big projects to change over time and that he had done nothing wrong.

On March 4, he wrote in a text to his partner, Mr. Lutz, “I cannot continue to sign change orders for things we will not be able to pay for.”

The same week, he collapsed in a flood of tears on the floor of their Manhattan apartment, his face buried in his hands.

“He had this quietly tortured look on his face,” Mr. Lutz, who works in international diplomacy, said. “He looked like a wounded child.”

On March 17, Mr. Lutz returned to their apartment to find Mr. Evans’s phone on the couch and a yellow light spilling out from behind a closet door. He walked over and fell to his knees. Behind the door was Mr. Evans’s body.

At the hall’s ribbon cutting on Dec. 30, Mr. Cuomo praised Mr. Evans, saying he “really put his heart and soul into this project.”

But his colleagues had already come up with their own way to remember him.

Around 30 of them had gathered inside the hall over the summer, congregating around a single, unfinished column. Wedged inside were Mr. Evans’s hard hat and steel-toed work boots, still covered in white dust.

One by one, they added personal mementos: sentimental photographs, paper renderings of the building, a medallion from the federal Department of Transportation.

Then they sealed the column shut.

If you are having thoughts of suicide, call the National Suicide Prevention Lifeline at 800-273-8255 (TALK) or go to SpeakingOfSuicide.com/resources for a list of additional resources.