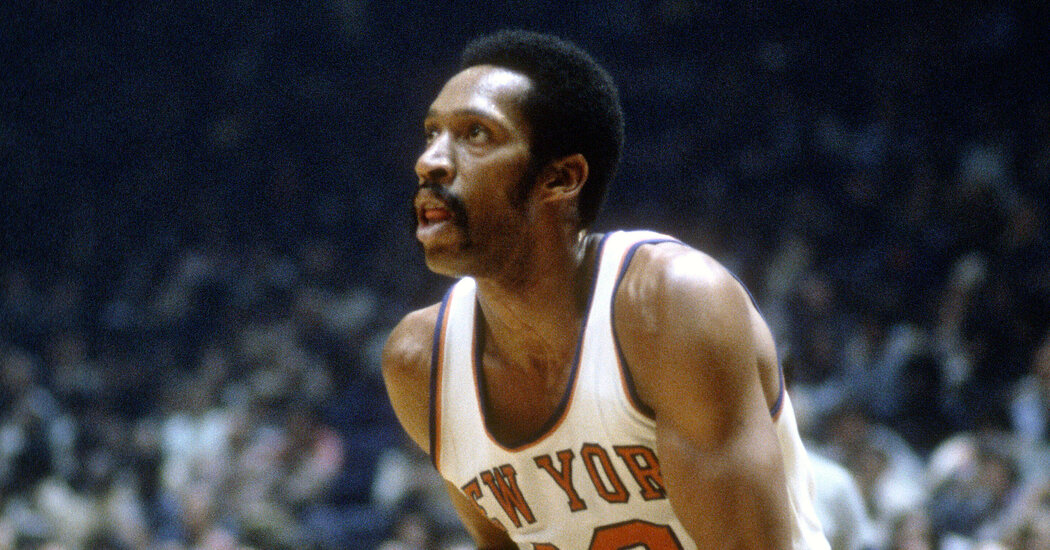 Any discussion of Harthorne Wingo, a popular reserve for the New York Knicks in the 1970s, usually starts with his name. His first name was Harthorne — not Hawthorne, as it was often misspelled.

As for his surname, fans would chant it (“Wing-o!, Wing-o!”) at Madison Square Garden to beseech Knicks Coach Red Holzman to insert him in the game.

His name “belongs in a poem or a song,” Dave Anderson, a sports columnist for The New York Times, wrote in 1973. “Or maybe in a museum, as if a Wingo once were a big bird that is now extinct.”

Wingo, a high-jumping forward who stood a gangly 6-foot-6, never became a museum exhibit. But the Beastie Boys used his name in their 1989 song “Lay It on Me”: “More updated on the hip-hop lingo (Not so hard, man)/My favorite New York Knick was Harthorne Wingo.”

Wingo joined the Knicks as a reserve during the 1972-73 season, when they won their second N.B.A. championship (and their last to date). He stayed a reserve through three more seasons. He had his best season in 1974-75, when he averaged 20.6 minutes, 7.4 points and 5.6 rebounds a game.

“He was a marginal player, a bench player with an unorthodox shot who they put to perfect use, for his energy and rebounding,” Marv Albert, the Knicks’ radio announcer during Wingo’s time with the team, said by phone. “The players really loved him, and so did the fans.”

After his scoring and rebounding helped cut a big Boston Celtics lead in a game in November 1973, Celtics Coach Tom Heinsohn told The Times, “Wingo went bananas out there.”

Wingo died on Jan. 20 in a New York City hospital, according to the New York City Medical Examiner. He was 73. He had long suffered from chronic obstructive pulmonary disease, his cousin, Jackie Wingo Wood, said.

Harthorne Nathaniel Wingo was born on Sept. 9, 1947, in Tryon, N.C. He was one of 14 children of Nathaniel Harthorne Wingo, a construction worker, and Jessie Mae (Gary) Wingo. Harthorne was part of the first class to integrate Tryon High School, which he attended in his senior year, and he was the only Black starter on the school’s basketball team, which won a conference title.

After a year at Friendship Junior College in Rock Hill, S.C., he played basketball in an industrial league in Spartanburg, S.C., then left for New York City. He played in a winter basketball league in 1968 and then at least one summer with the vaunted Rucker Pro League in Harlem, where professionals and talented local players competed.

“For me, it was like somebody takes a stallion out to an open field and lets him go,” Wingo told PolkSports, a website that covers sports in the county where he grew up.

The Knicks learned about him because of his Rucker success. But before they signed him he played for the Harlem Wizards and the minor-league Allentown Jets, where he became a star. When the Knicks signed him in February 1973, he joined a team with a roster that included the future Hall of Famers Willis Reed, Walt Frazier, Dave DeBusschere, Bill Bradley, Jerry Lucas and Earl Monroe.

“Like his name, he was a very unique individual,” Frazier said in a statement. “He was effervescent, gregarious, with an infectious personality not only endearing to his teammates but the Knicks Nation as well.”

The Knicks waived Wingo in 1976, and he went on to play in Italy, Switzerland and South America. After retiring from basketball in 1983, he endured financial and substance abuse problems, according to PolkSports.

He is survived by his sister, Rosemary Wingo Palmer, and his brother, McDonald.

Early in his career, Wingo talked about the “Wing-o!” chant. “It makes me come alive and want to work harder,” he told The Times in 1973. “It’s as though the people are offering me a reward for all my years of struggle to make it here.”

No one has scored more N.B.A. points than Kareem Abdul-Jabbar, who has 38,387. He ranks first on the Milwaukee Bucks’ career list despite...
Read more