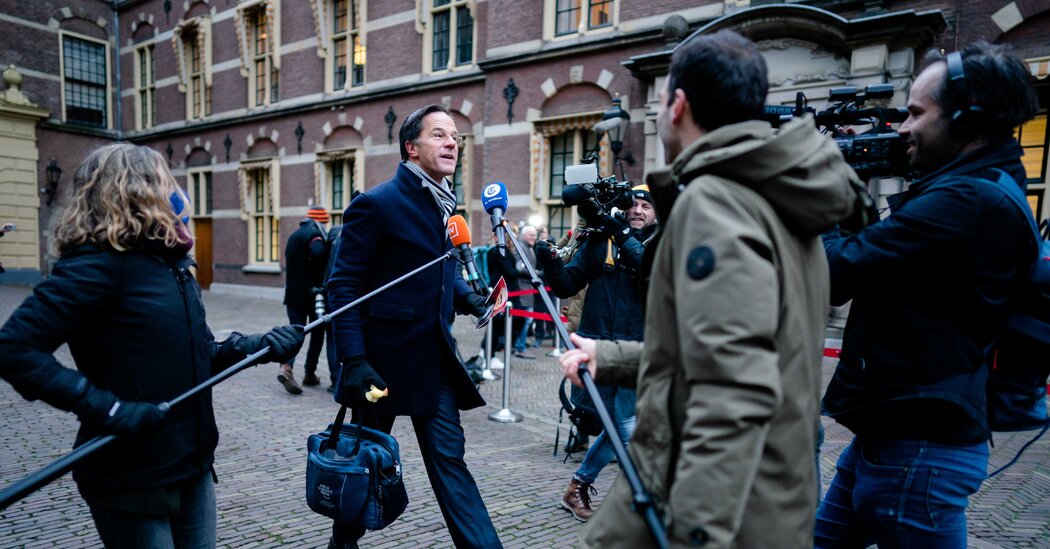 Prime Minister Mark Rutte of the Netherlands, one of Europe’s longest-serving leaders, and his cabinet resigned on Friday over a report highlighting systemic failure by his government to protect thousands of families from overzealous tax inspectors.

Mr. Rutte has handed in his resignation and that of his entire cabinet to King Willem-Alexander van Oranje, the public broadcaster NOS reported.

“Mistakes have been made on all levels that have led to great injustice for thousands of families. Innocent people have been criminalized, and their lives destroyed,” Mr. Rutte said in a news conference. “This cabinet has takes full responsibility.” Mr. Rutte said the report that led to the downfall of the cabinet was “hard as nails,” but “fair.”

The report, the result of an inquiry in which Mr. Rutte was also questioned, concluded that “unprecedented injustice” had been done to innocent families, some of whom were forced to immediately repay huge amounts in child care benefits.

In many cases an administrative mistake like a missing signature was enough for the tax authority to label parents as frauds and fine families as much as tens of thousands of euros, the report said.

“Fundamental principles of the rule of law were violated,” it concluded, blasting both the government and Parliament for creating “rock-hard laws” with little room to fairly consider individual cases.

Mr. Rutte and his cabinet will continue running the government in a caretaker capacity, with general elections already scheduled for March. His center-right is currently leading in the polls, and the other parties in his coalition, who have also been touched by the scandal, are not expected to call for earlier elections because of the coronavirus pandemic.

Mr. Rutte had been serving his third term as prime minister and has been leading the Netherlands since 2010. If his party again gets the largest share of votes in the upcoming elections, he can serve a fourth term.

The chairman of the parliamentary committee that led the inquiry, Chris van Dam, said the system that was created to track down benefits fraud was “a mass process with no room for nuance.”

In a separate investigation, the Dutch Data Protection Authority concluded that tax inspectors had discriminated against citizens with dual nationality.

The former vice president of the Dutch Council of State, Herman Tjeenk Willink, added to the accusations of systematic failure by calling upon parliamentarians to also take responsibility for voting in the strict laws.

“They should look themselves in the mirror,” he wrote in an op-ed in NRC Handelsblad, “and question their own role in this affair.”

Insiders expected Mr. Rutte to shrug off any criticism very easily. “Yes, it is a disgrace this happened under Rutte’s responsibility,” said Joost Vullings, a political commentator, “but if anyone knows how to not feel embarrassed it is our prime minister. He will go full throttle to win the upcoming elections.”

Mr. Rutte said last month that the tax campaign detailed in the December report was “shameful,” and that the government has announced that nearly 10,000 families will each be given compensation of 30,000 euros, or about $36,500. Earlier this week Mr. Rutte insisted that the government should not step down because it could weaken the nation’s response to the pandemic.

The Netherlands has grappled with the coronavirus since March, and its inability to curb the spread of the disease has laid bare what many say are systemic problems with overregulation. Like many countries in Europe, the Netherlands is in lockdown.

A report in November ranked the government as a leading global tax haven for large corporations, so its pursuit of individuals for relatively small amounts did not go unnoticed.

This duality and others in Dutch politics highlight the downsides of the Dutch poldermodel, a system of subjecting every major decision to review by every institution, representative or even individual involved. The outcome is always a compromise.

“This affair is an example of a systematic mistake, that has risen from our coalition politics, where every party is scoring points for their own supporters,” said Sheila Sitalsing, a commentator for de Volkskrant, “but the final compromise becomes impossible to execute for those having to work with it on a daily basis.”

Ms. Sitalsing also said that voters for two decades have been rewarding politicians promising stricter rules. “So this is what you get,” she said of the child benefits scandal.

Families targeted by the tax authority on Tuesday stepped up the pressure on Mr. Rutte by calling for his cabinet to step down in an open letter published in the Trouw newspaper.

“What needs to be done is clear: Everything should be repaired and cleaned up,” a group of families said. “We have no faith the current cabinet is capable of doing this.”

In a rather unique move in the Netherlands, the families this week filed criminal charges against five politicians, including Finance Minister Wopke Hoekstra and Economy Minister Eric Wiebes, for their role in the affair. If convicted, they could face up to six months in prison.

“We pressed criminal charges because the victims I represent have been ruined, some became homeless because of these policies. These politicians have been extremely negligent,” said Vasco Groeneveld, a lawyer representing 20 victims. “Every time I open their files, shivers run down my spine. These people have been treated awfully.”

Mr. Wiebes, who was minister of finances in a previous cabinet, will resign immediately and will not stay on in the caretaker government, NOS reported.

On Thursday, the opposition leader Lodewijk Asscher, a former minister of social affairs, stepped down as leader of the Dutch Labour Party over his role. His resignation increased the pressure on Mr. Rutte to reconsider his position.

This year’s report offers a far more robust discussion of the national security implications of climate change, whose threats, for the most part,...
Read more
WORLD

The N.F.L. on Tuesday sent a memo to all 32 teams effectively mandating that support personnel including coaches and trainers be vaccinated against...
Read more