For British Drill Stars, the Police Are Listening Carefully 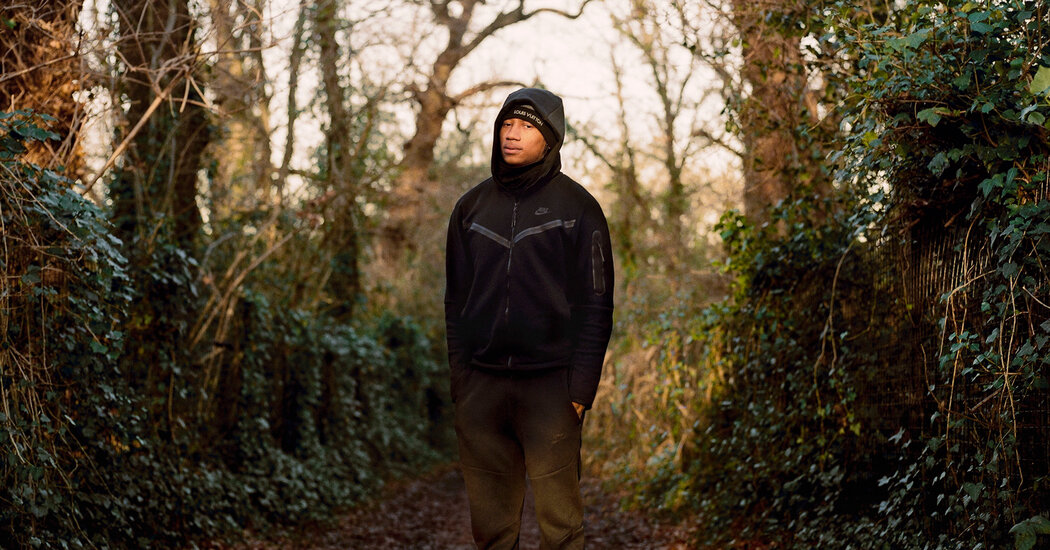 LONDON — The British rapper Digga D can’t explain how he lost the use of an eye while serving a prison sentence last year: not because he doesn’t want to, but because talking about what happened might get him sent back to jail.

The police here scrutinize everything the 20-year-old says in public, whether in an interview, or on a track.

In 2018, Digga D was sentenced to a year in prison for conspiracy to commit violent disorder, after a court case in which music videos by the masked rapper were presented as evidence. In sentencing Digga D, whose real name is Rhys Herbert, the judge also issued an order banning him from releasing tracks that describe gang-related violence.

He must notify the police within 24 hours of releasing new music, and provide them with the lyrics. If a court finds that his words incite violence, he can be sent back to prison; parole conditions also limit what he can say publicly about his past.

So when asked, in a Zoom interview, about how he lost the sight in his eye, Digga D could only shrug.

Digga D is a leading voice in Britain’s drill scene, a subgenre of hip-hop featuring eerie piano melodies layered over droning bass lines, and lyrics portraying life in some of the country’s most deprived neighborhoods. Arising in Chicago, drill started to take on a new life in London in the mid-2000s, fusing with the city’s grime and garage sounds and helping to drive offshoot scenes in places as disparate as Brooklyn and Brisbane, Australia.

But drill’s sometimes violent lyrics have led the police and lawmakers to accuse the genre of fueling knife crime, which is currently at a 10-year high in England, according to government figures.

Like Digga D, some of Britain’s most popular drill artists have found themselves on the wrong side of the law, and their lyrics reflect their experiences of gang life, criminal justice and time behind bars.

Sentencing orders, like the one banning Digga D from rapping about violence, have also been handed to other drill artists. Introduced in 2014 and known as criminal behavior orders, the measures give judges broad powers to regulate a convicted criminal’s life once they are released from prison, such as by banning them from certain neighborhoods or by preventing them from meeting former associates. Judges have also used the orders to control some musicians’ lyrics, arguing that when rappers brag about attacks on rivals, it stokes street tensions.

In January 2019, for example, a London judge sentenced the musicians Skengdo and AM to nine months in prison for breaking a criminal behavior order by performing a song with lyrics including a list of gang members who had been stabbed.

Rebecca Byng, a spokeswoman for the London police’s violent crime unit, said in an email that criminal behavior orders had “a wide-ranging scope, and go beyond addressing lyrics which incite violence,” adding that they were an important tool to “steer young people away from violence.”

“We are not targeting music artists, but addressing violent offenders,” she added.

Yet the London police has recently stepped up its efforts to remove drill music videos from YouTube.

In 2020, the video platform removed 319 music videos at the force’s urging, according to a police report obtained through a Freedom of Information request. That is more than twice the number it took down in 2019. In total, YouTube has removed more than 500 music videos over the past three years, the report says.

Keir Monteith, a criminal defense attorney based in London, is advising a government-funded research project studying how rap lyrics are used as evidence in court. He said that in some ways, the authorities’ treatment of drill recalled the heyday of punk in the 1970s, when the police shut down concerts and the BBC banned a hit single by the Sex Pistols.

But if punk artists were treated harshly, drill rappers have it even worse, Monteith said. The efforts of the criminal justice system were “focused, worryingly, on a particular set of our society, which is young Black lads,” he noted. “That’s the real concern here.”

Lyrics that deal with life behind bars have long been defining features of American hip-hop, but they are relatively new preoccupations for British rappers. As a growing number of drill artists fall foul of the criminal justice system, however, those themes are starting to trickle through.

In a recent freestyle posted to YouTube, Digga D raps about using his jail kettle to boil canned tuna; and Headie One, another London-based drill rapper, describes using cookies to make a birthday cake in prison in “Ain’t It Different,” a song that reached No. 2 in the British singles chart this summer.

Potter Payper, a 25-year-old drill musician, was incarcerated on drug-related charges when he wrote much of his most recent album, “Training Day 3.” He has been in prison 14 times, and, like Digga D, his music videos have formed part of the evidence used to convict him.

During his most recent custodial sentence, Payper initially wasn’t writing music or looking after himself, he said in a phone interview. But a turning point came one evening in June 2019.

Stormzy, perhaps Britain’s most commercially successful rapper, was performing on the main stage at the Glastonbury Festival, and Payper could hear fellow inmates in nearby cells listening to the rapper’s performance. After Stormzy named him onstage as one of his influences, the other prisoners started banging on their doors, yelling Payper’s name.

After that, he wrote nearly 30 new songs, he said.

How Digga D lost the use of his eye — the story he was so hesitant to talk about — can be found in prison records. He was stabbed with a blade fashioned from a tuna can, according to an official at the Ministry of Justice who was not authorized to publicly discuss the matter and who spoke on the condition of anonymity. Cecilia Goodwin, Digga D’s lawyer, said that the rapper had been struggling with post-traumatic stress disorder after the attack.

But much of Digga D’s experience remains hidden, for now.

“There’s more in my heart that I would like to speak about and show,” he said.

He might get to do that with music when the court order expires, in 2025.