Home NEWS Emily Ratajkowski covers up her child bump as she steps out along...
NEWS

Emily Ratajkowski was spotted going for an early-morning coffee run with her husband Sebastian Bear-McClard and their shared pup Columbo.

The two appeared to be enjoying each other’s company as they made their way through the streets of New York City during an especially chilly day.

The pregnant supermodel hid her baby bump well in a black outfit with a puffy red jacket that made her look ready for a day on the ski slopes. 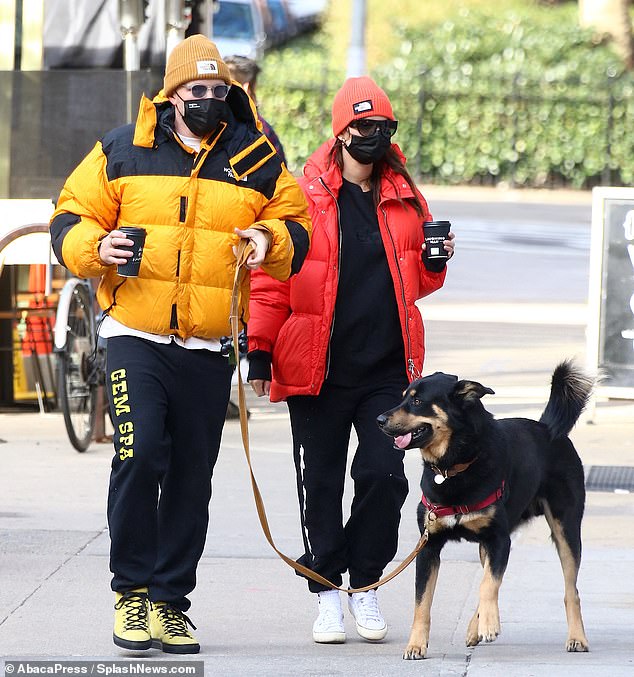 Better together: Emily Ratajkowski was seen covering up her baby bump as she went on a coffee run with her husband Sebastian Bear-McClard and their dog on Friday morning

The 29-year-old supermodel looked chic in the tomato red jacket which looked to provide plenty of insulation during the frigid East Coast winter weather.

She also wore a black sweater over her growing baby bump and matched it with a pair of joggers; the model contrasted her clothing choices with a pair of white sneakers.

The Vogue favorite wore large pair of black sunglasses to keep the luminous winter sun out of her eyes during her walk.

Ratajkowski also wore a red North Face beanie, while her husband opted for a dark yellow version of the same headwear. 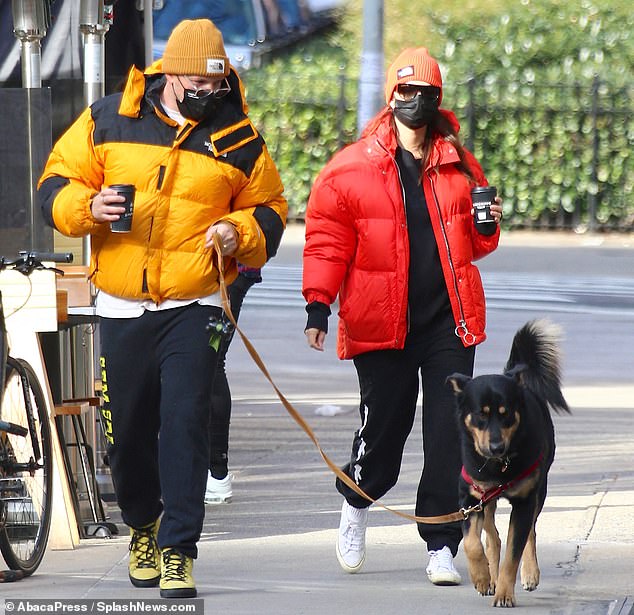 Cozying up: The married couple both wore puffy jackets and similar North Face beanies to keep themselves warm in the freezing New York winter weather

Bear-McCloud could be seen in a predominantly black-and-yellow clothing ensemble as he wore a puffy jacket with the same colors.

He was spotted in a pair of black sweatpants with yellow lettering and a set of dual-tone high-top sneakers; he also wore sunglasses for the trip.

The future parents both wore face masks in order to reduce the chance of any potential exposure to COVID-19.

Ratajkowski has updated her fans regularly through her Instagram account after she first announced her pregnancy in October via that month’s issue of Vogue.

In an interview for the publication, the supermodel spoke about the questions that she was waiting to answer upon the maturation of the couple’s child. 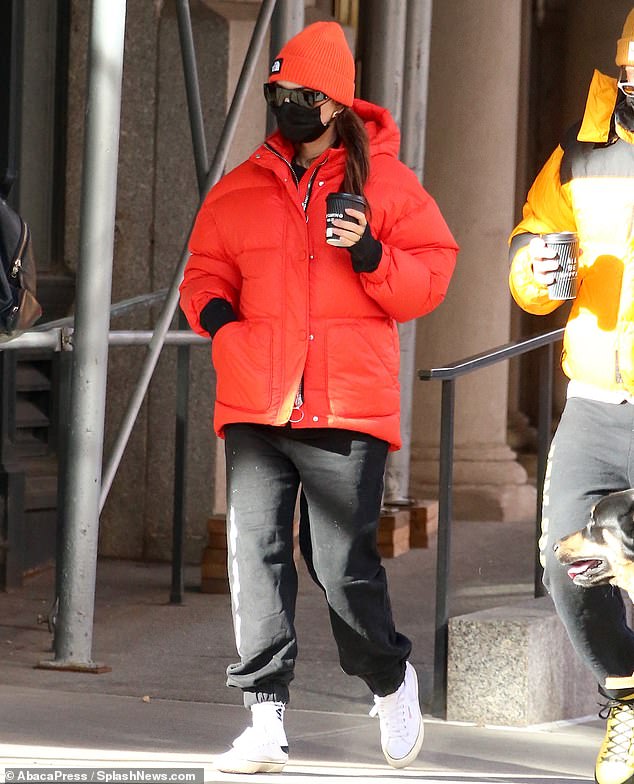 Playing it safe: Ratajkowski and her husband both wore large face masks to keep themselves protected from any potential exposure to coronavirus ahead of the birth of their child 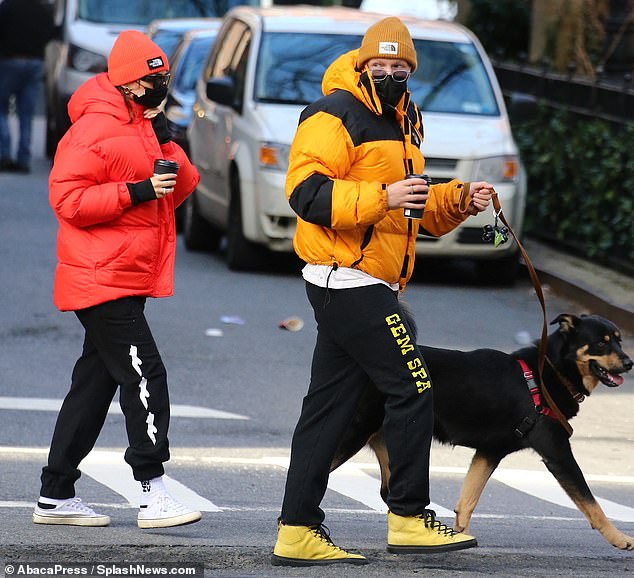 Putting it out there: Ratajkowski first announced her pregnancy in October and featured on the cover of Vogue magazine that same month

Ratajkowski pondered: ‘Who will this person be? What kind of person will we become parents to? How will they change our lives and who we are? This is a wondrous and terrifying concept, one that renders us both helpless and humbled.’

She also made remarks about how fast the information about her pregnancy was circulated through social media, which she was concerned about.

‘Instagram knows I’m pregnant before most of our close friends or even my parents do. My timeline is filled with targeted ads for maternity clothes, and my explore page is all pictures of babies…and tips for expecting mothers,’ she said.

The model has still appeared to be excited for the upcoming birth of her child, and posted a number of photos to her Instagram account on New Year’s Eve displaying her baby bump in full. 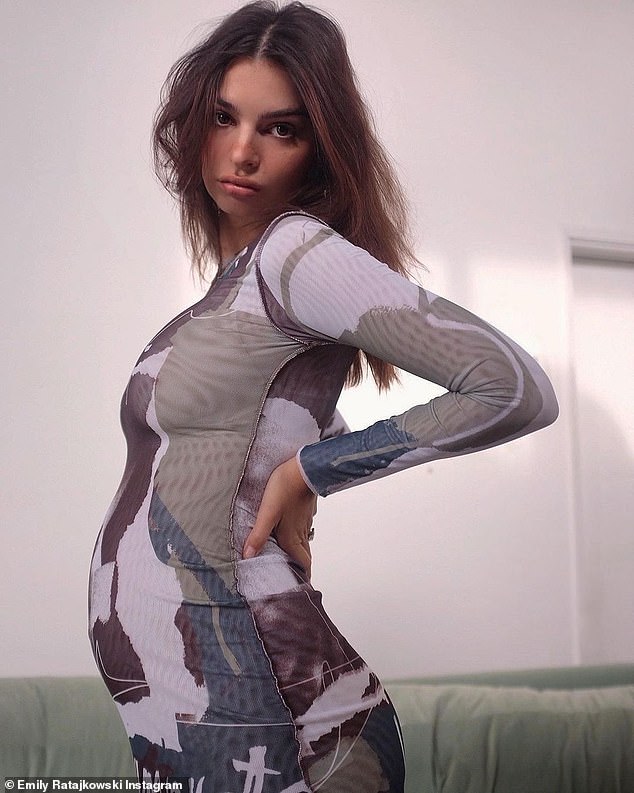 Going in-depth: The supermodel spoke about her concerns regarding her pregnancy in an article for Vogue and noted that the prospect of becoming a parent was ‘a wondrous and terrifying concept’ to her 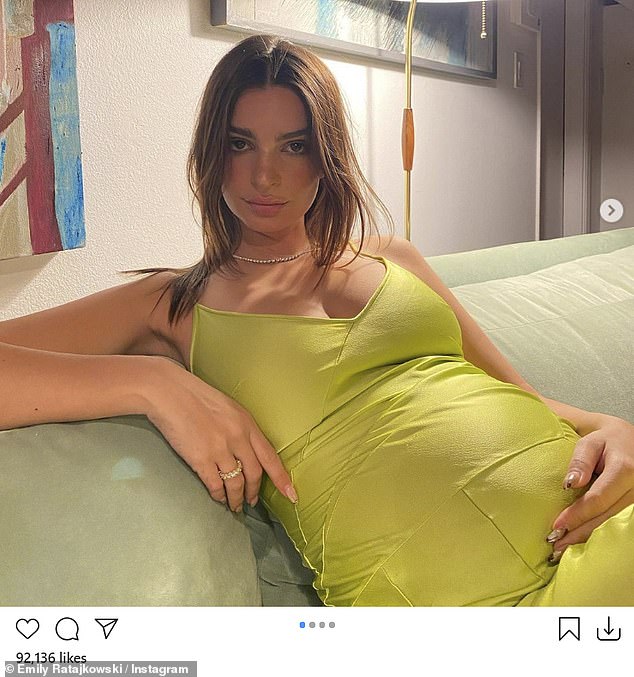 Big news: The model spoke about the prevalence of social media throughout her pregnancy so far and commented that sources on Instagram had discovered her status as a future mother ‘before most of our close friends or even my parents’