Covid-19 US: New Yorkers could wait 14 WEEKS for vaccine appointment New York City failed to fill hundreds of appointments to receive the Covid-19 vaccine despite Governor Andrew Cuomo warning that people could expect a 14-week wait for a shot, with a hard-to-use online registration portal being blamed for the slow sign-ups.

New York City Comptroller Scott Stringer highlighted glaring issues in the city’s process to sign up for a vaccine appointment in a Twitter thread late Sunday after the state dramatically loosened eligibility requirements and opened up two mass vaccination sites in Brooklyn and the Bronx.

Stringer said when he checked the sign-up website, which can only be accessed after creating an account on a separate site, there were over 200 slots available for January 12 at one of the sites.

He pinned the large number of vacancies on both the ‘bewildering’ complexity of the sign-up process – which includes a 51-question gauntlet rife with technical issues – and on city officials’ failure to mobilize people to seek appointments.

‘The @NYCHealthy site for signing up for a COVID vaccination is complex, burdensome, and buggy,’ Stringer tweeted.

‘It will present an obstacle for too many people — particularly seniors — trying to sign up. This is a major problem.’

‘We should be #1 in vaccinations in the nation from day one — and we should be using every tool at our disposal to vaccinate as many New Yorkers as possible as quickly as possible,’ he added.

New Yorkers could have to wait up to 14 weeks for an appointment to receive the COVID-19 vaccine, Governor Andrew Cuomo’s office warned after it abruptly relaxed eligibility requirements for the second time in as many days. Pictured: People line up for vaccines outside Nassau Community College in Garden City on Monday NYC Comptroller Scott Stringer (pictured) attacked the ‘bewildering sign-up process’ on Twitter on Sunday, arguing that it was discouraging people from seeking appointments 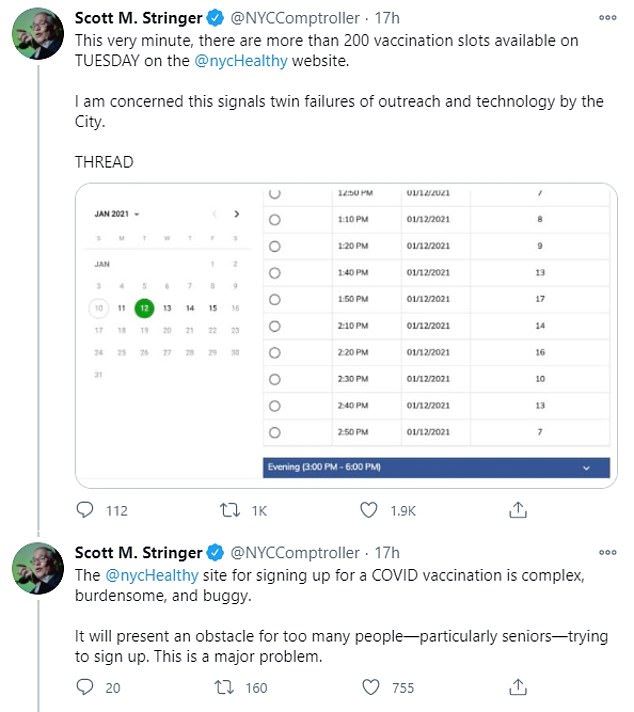 Stringer said when he checked the sign-up website, which can only be accessed after creating an account on a separate site, there were over 200 slots available for January 12

Who can get vaccinated under Phase 1B?

More than four million New Yorkers became eligible to receive COVID-19 vaccines when the state moved into Phase 1B, including:

It wasn’t clear by Monday evening  if the city had worked out the glitches in vaccine registration site. Stringer’s office didn’t return a message from DailyMail.com. The city’s and the state’s health departments also didn’t return messages.

New York state moved into Phase 1B of its vaccination plan on Monday, allowing for residents over the age of 75, teachers, transit workers and police to begin receiving shots in addition to healthcare workers.

The new phase also broadened the types of healthcare workers that can receive the vaccine to include anyone who interacts with the public, such as licensed practical nurses, pharmacists, dentists and podiatrists.

Cuomo, who had previously been adamant that all healthcare workers should be inoculated before the state moved on to other categories, announced the changes at a press conference on Friday in the face of criticism from medical providers who have been forced to throw out vials of the vaccine that expired before they were able to distribute them.

Even with the new measures, New Yorkers’ path to receiving the coveted vaccines is still mired in hurdles like the ones Stringer pointed out on Sunday.

As of early Sunday, New York City had administered 203,181 doses of the vaccines to its residents out of more than 524,000 doses that have been delivered, data from the city’s health department showed.

Across the state more than 430,000 residents have received their first doses of the vaccine, out of more than 1.2 million delivered.

Cuomo urged residents to be patient with the rollout in a statement on Monday, warning that those who are already eligible could have to wait up to 14 weeks to set an appointment.

At that rate, the state is not expected to expand eligibility requirements again until mid-April.

Cuomo blamed the delays on the fact that the group of more than four million people eligible under Phase 1B ‘dwarfs the vaccine supply coming from the federal government’. 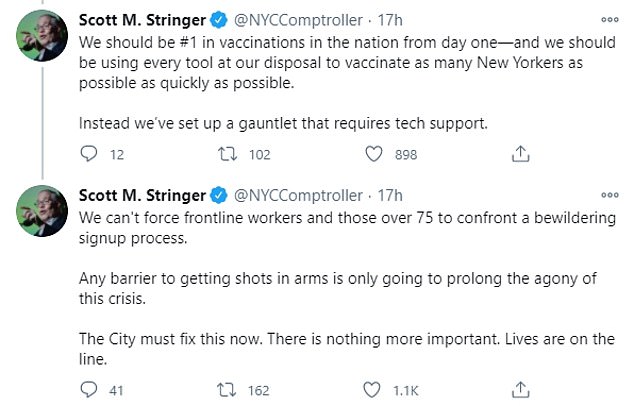 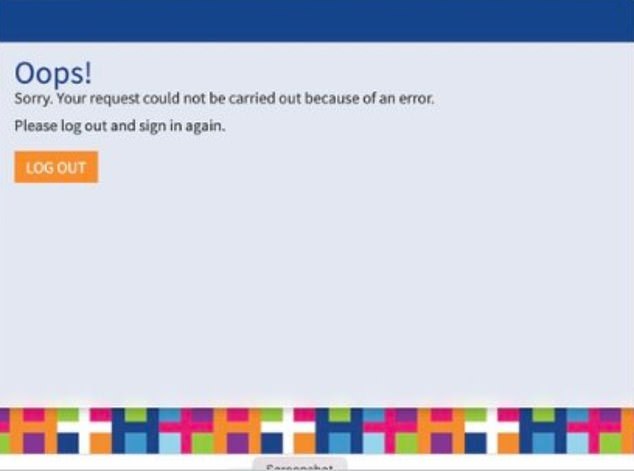 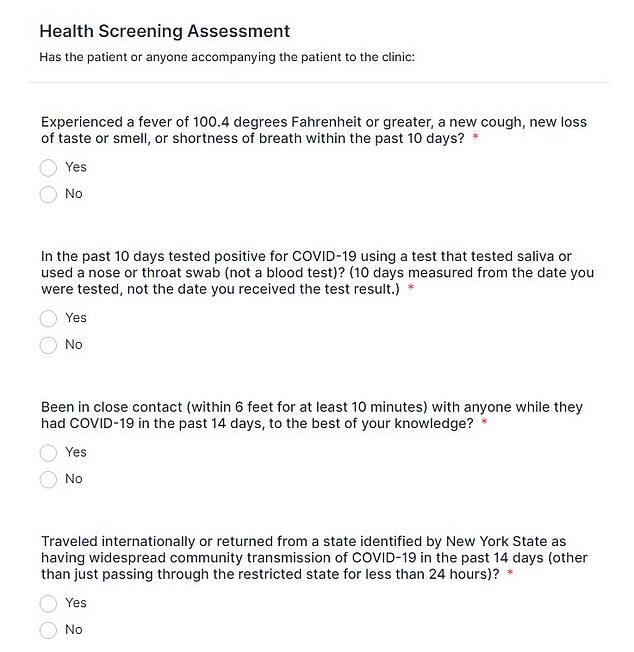 The process for signing up for appointments in New York City is especially arduous, including a 51-question survey (pictured) on a website rife with technological issues 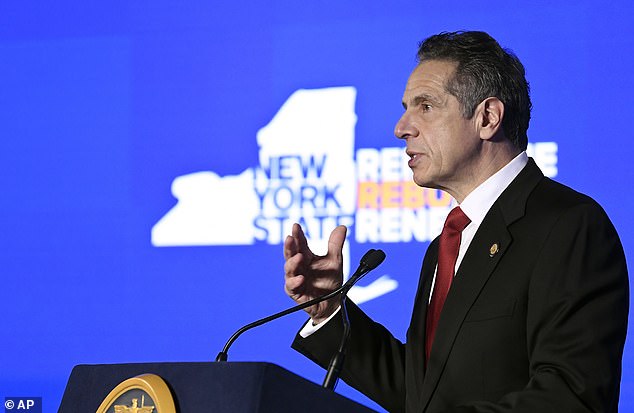 Gov Cuomo moved the state into Phase 1B of its vaccination plan on Monday, allowing for residents over the age of 75, teachers transit workers and police to begin receiving shots in addition to healthcare workers

On Friday, Cuomo said he was working with the incoming Biden administration and hoped that New York’s supply from the federal government ‘dramatically increases’ once the Democrat takes office on January 20.

Without such an increase in vaccine supply, Cuomo said, New York would take another 47 weeks, or nearly a year, to reach herd immunity levels.

The New York Department of Health is setting up 20 mass distribution sites throughout the state over the next several weeks.

Two sites opened in New York City on Sunday, one at the Brooklyn Army Terminal and another at the Bathgate Contract Postal Station in the Bronx. 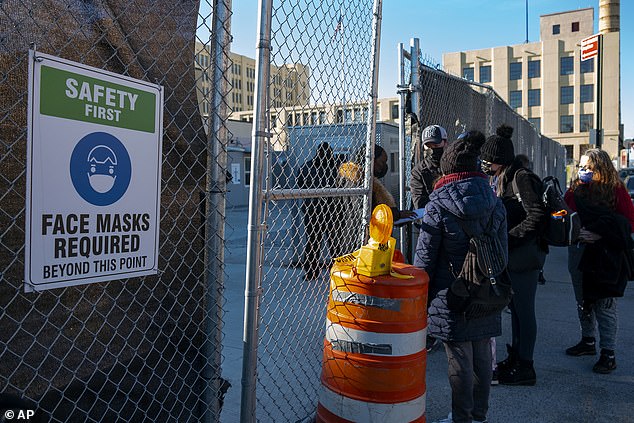 People wait to receive vaccines outside a New York Health and Hospitals vaccine clinic in Brooklyn on Sunday. As of early Sunday, New York City had administered 203,181 doses of the vaccines to its residents out of more than 524,000 doses that have been delivered, data from the city’s health department showed 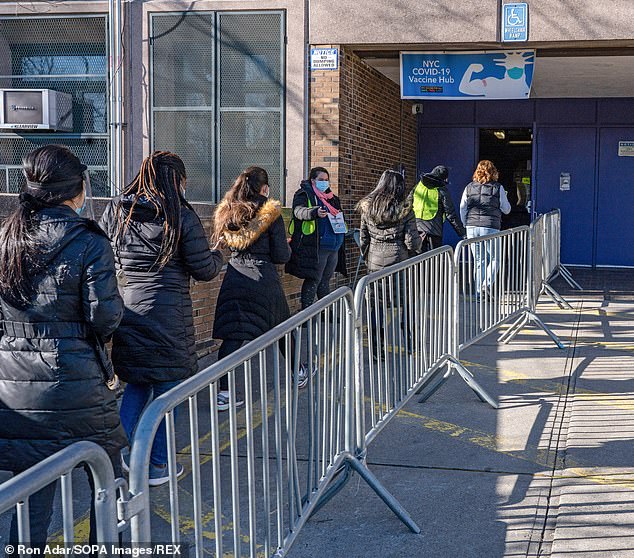 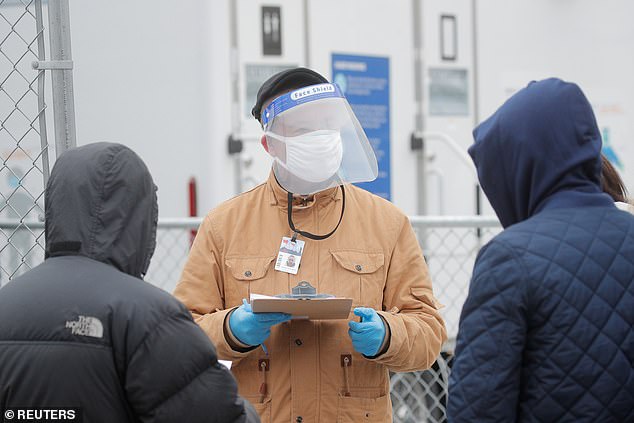 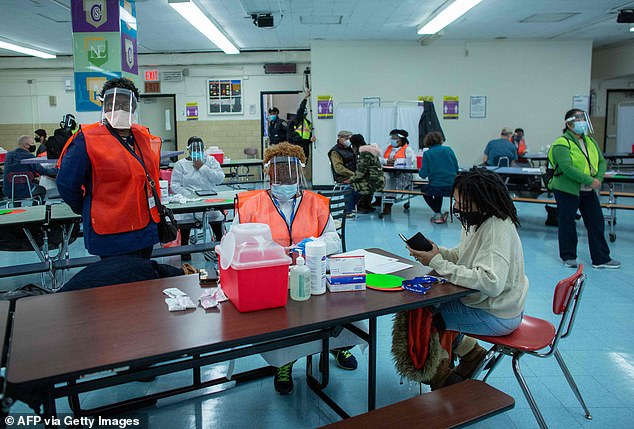 Under Cuomo’s state distribution plan, Phase 1A of vaccination had been limited strictly to healthcare workers, and the governor was demanding that 70 percent of that group receive the shot before expanding access to other groups.

However, a surprising number of healthcare workers are refusing the shot, and in New York only an estimated 13 percent of that group has received a dose so far.

Mayor Bill de Blasio had repeatedly appealed to the governor to relax the rules, saying the city had hundreds of thousands of shots available to administer to seniors. But the governor refused to bend, insisting as late as Friday afternoon that healthcare workers must take priority.

Nursing home residents are also in the priority group in every state, but their vaccinations are being administered through federal contracts with pharmacy chains, and do not count as part of state allotments.

On Friday morning, de Blasio made an impassioned speech imploring Cuomo for the ‘freedom to vaccinate,’ saying the city had 270,00 doses that could be immediately be administered to seniors over age 75 if the rules were relaxed.

The mayor argued that seniors would be much less hesitant to take the vaccine than younger healthcare workers.

‘You’re not going to see the same hesitancy as you do with younger folks,’ he said.

‘This is the single most vulnerable category… they have the most need and most desire for the vaccine. They won’t wait,’ he pleaded.

‘We are not allowed by state law to give a single shot to a single New Yorker over 75,’ de Blasio complained.

By the late afternoon, Cuomo had relented and announced the new more relaxed statewide policy. 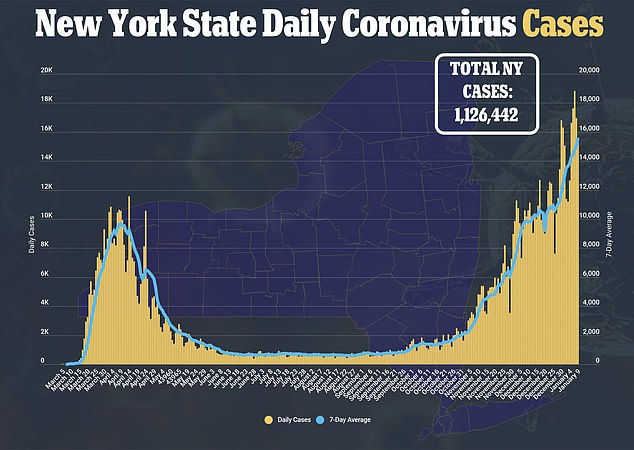 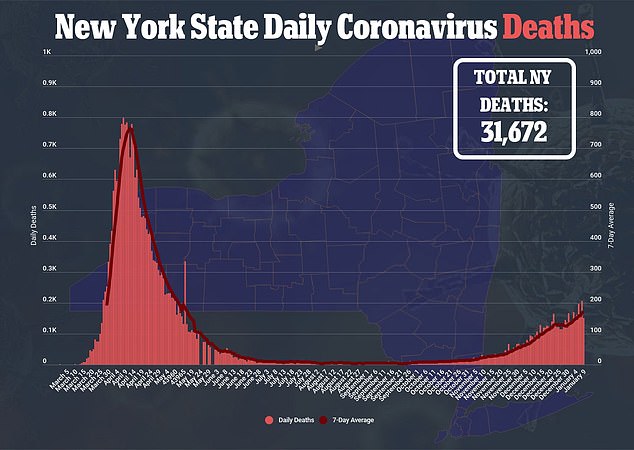 The vaccine reluctance of healthcare workers, who include staff such as hospital clerks and janitors in addition to doctors and nurses, has led to shocking situations in which valuable doses have been thrown in the trash.

In Harlem, a health clinic even had to throw out a handful of doses after nearly half of its 20 staffers refused the vaccine, and the city Health Department told the clinic that it could only vaccinate members of eligible groups, according to the New York Times.

The clinic had just hours to administer the doses after its second Moderna vial containing 10 doses was punctured, and raced to find eligible recipients, but was unable.

‘People don’t hold hands in blocks of 10 to come over to get immunized,’ Dr. Neil Calman, president of the Institute for Family Health, which owns the clinic, told the paper.

‘We just need to enable providers to use their professional judgment to give it to people at their highest risk.’ 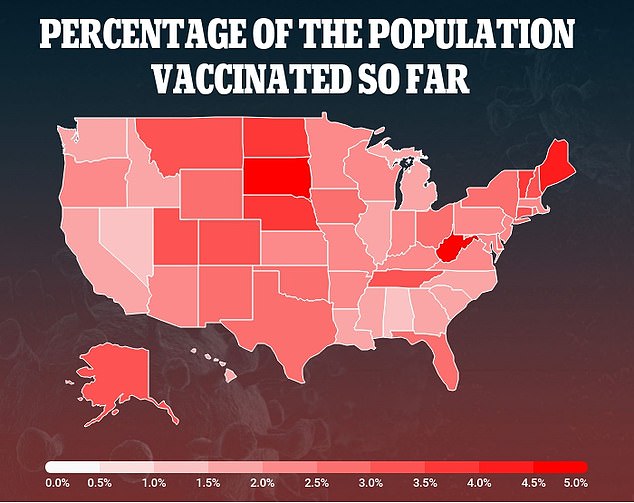 In New York, like in much of the US, efforts to get the two vaccines that have so far been authorized into the arms of Americans have moved slower than hoped due to a slew of issues

WASHINGTON: Four members of the Sikh community are among those who killed in the mass shooting at the FedEx facility in Indianapolis on...
Read more
NEWS

DMX public memorial to be held at Barclays Center in Brooklyn......
Read more