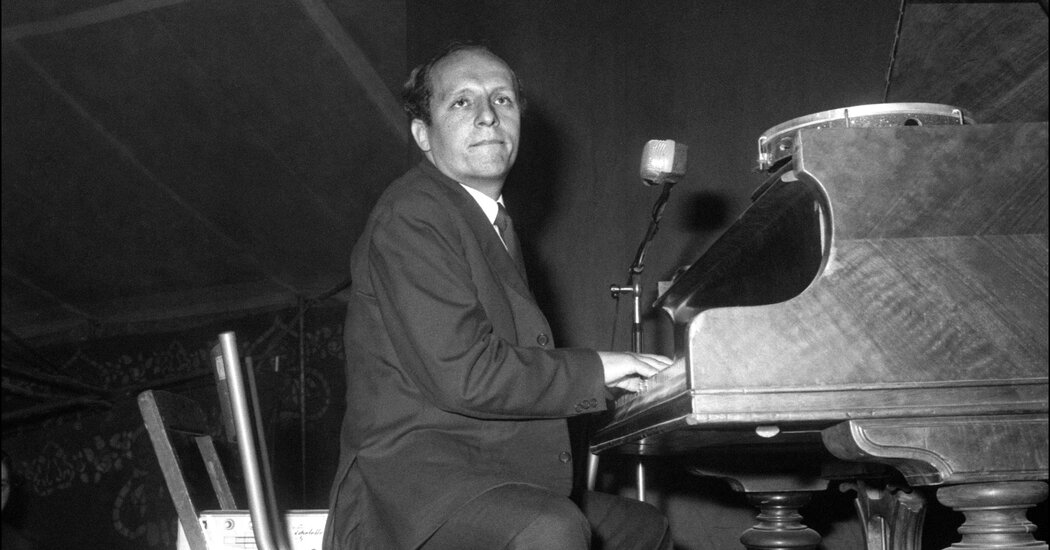 Claude Bolling, a jazz pianist and composer with remarkable crossover appeal whose 1975 album, “Suite for Flute and Jazz Piano,” spent more than 10 years on the Billboard classical album chart, died on Dec. 29 in Garches, a suburb of Paris. He was 90.

His death was announced on his website, which gave no further details.

Mr. Bolling played and composed in a variety of styles — the Claude Bolling Big Band played regularly for years at the Méridien Etoile hotel in Paris — and wrote the scores for dozens of movies and television shows in both France and Hollywood. But “Suite for Flute and Jazz Piano,” written for and recorded with the famed classical flutist Jean-Pierre Rampal, elevated him to a new level of fame.

Although the record drew criticism from both classical and jazz purists as, in the words of one article, “watered-down jazz with a thin classical veneer,” the listening public loved it. News accounts from the mid-1980s, noting that it was still on the charts after a decade, said only the Pink Floyd album “The Dark Side of the Moon,” released in 1973, had achieved such longevity at that point. (“Dark Side” remained on the Top 200 album chart until 1988 and has periodically returned.)

Mr. Bolling was inspired to pursue other crossover projects, including the 1980 album “Picnic Suite,” recorded with Mr. Rampal and the guitarist Alexandre Lagoya. An image on Mr. Bolling’s website shows the Billboard classical album chart from Sept. 4, 1982. “Suite for Flute and Jazz Piano,” in its 343rd week on the chart, sits at No. 5, with “Picnic Suite” at No. 22, his “Toot Suite for Trumpet and Jazz Piano” at No. 27, his “Concerto for Classical Guitar and Jazz Piano” at No. 30 and his “Original Boogie Woogie” at No. 39.

“Claude’s music was so vastly appealing,” the flutist Pamela Sklar, who toured with Mr. Bolling for 11 seasons, said by email, “because it distilled attributes of sophisticated classical and esoteric jazz styles into accessible palettes of happiness, excitement, innocence, pathos, playfulness and sincerity.”

Ms. Sklar interviewed Mr. Bolling in 2010 for an article in The Flutist Quarterly. He recalled how the success of the 1975 album had changed his fortunes.

“At this time, when I thought about a concert in the U.S., I could only imagine something in a little jazz club in small-town America,” he told her. “Thanks to Jean-Pierre Rampal and this ‘Suite,’ my first concert was at Carnegie Hall!”

Mr. Bolling was born on April 10, 1930, in Cannes, France, in a hotel where his father was the manager. His mother played piano, and he proved to be a prodigy. He spent most of his life in Paris, but in World War II, during the occupation, his mother took him to live in Nice.

“During World War II, when I was a kid, jazz was all but banned by the Nazis in my country,” he told The Hartford Courant in 1991. “So I got most of my jazz from 78 r.p.m. recordings.”

At 14, he won an amateur jazz piano contest. At 15, returning to Paris at the end of the war, he became the youngest member of the French Society of Authors, Composers and Publishers of Music.

He played with various jazz stars who came through Paris and also had his own septet. He particularly admired Duke Ellington, and in 1956 he formed a big band to play Ellington’s music. In the 1960s, the two would meet and become friends.

“Among the lessons I learned from Ellington,” Mr. Bolling said in 1991, “is that you write specifically for the personality of the instrumental soloists.”

It was a philosophy he employed when Mr. Rampal, who had been impressed with a piece that Mr. Bolling had written for and performed with the classical pianist Jean-Bernard Pommier on French television, asked whether Mr. Bolling would write something for him.

“I wrote ‘Suite for Flute’ for Jean-Pierre,’” Mr. Bolling said. “Had I written it for another, it would be completely different. Each musician has his own voice, and I write for that.”

Ms. Sklar described the appeal of playing the famous suite.

“The ‘Suite’s’ seven-movement flute part was expertly written and delightful to play with piano, and especially with bass and drums,” she said. “That’s one of the reasons why many classical flutists want to play it; it’s very jazzy, and improvisation is optional. I loved that it also included bass flute and alto flute.”

The critic Allan Kozinn, writing in 1982 in The New York Times, described the formula that Mr. Bolling created that had worked so well in the suite and in his later works.

“In his crossover pieces,” he wrote, “Mr. Bolling’s compositional strategy involves giving his classical soloist a through-composed part, written in a style replete with Baroque and classical gestures and allusions to the featured instrument’s repertory and idiomatic uses, while his own piano, bass and percussion trio interacts with a lightweight jazz counterpoint.”

Mr. Bolling made numerous recordings and performed extensively in France, the United States and elsewhere.

“One of the most endearing things about him was his love of music, and his engaging, magnetic personality onstage,” Ms. Sklar said. “He loved talking to his audiences and thanking them with encores, which they enjoyed. Sometimes the encores would continue for a long time. Watching from backstage, we would wonder if they’d ever stop!”

The Associated Press said that Mr. Bolling’s wife of 48 years, Irène Dervize-Sadyker, died in 2017 and that the couple had two sons, David and Alexandre.

Mr. Bolling’s compositions were sometimes described as “combining” jazz and classical music, but he had a different view.

“I don’t like the word ‘combination,’” he said in 1982 in an interview for The Syracuse New Times. “This is simply a dialogue between two kinds of music. I have made nothing new. This has been going on for a long time.”

Mr. Bolling liked to have fun on the road. At restaurants, he would often demonstrate a particular trick: placing one piece of silverware over another, then striking the one in such a way that it flipped the other into his empty wine or water glass.

“It was funnier when he missed,” Ms. Sklar wrote in The Flutist Quarterly, “and he didn’t give up easily.”

“Drukqs” received a mixed critical response, but it did have devotees. Not long after its release, the members of Alarm Will Sound, an...
Read more
Music

On a recent afternoon in a brightly lit studio in Brooklyn, Mervin Primeaux-O’Bryant and Brandon Kazen-Maddox were filming a music video. They were...
Read more