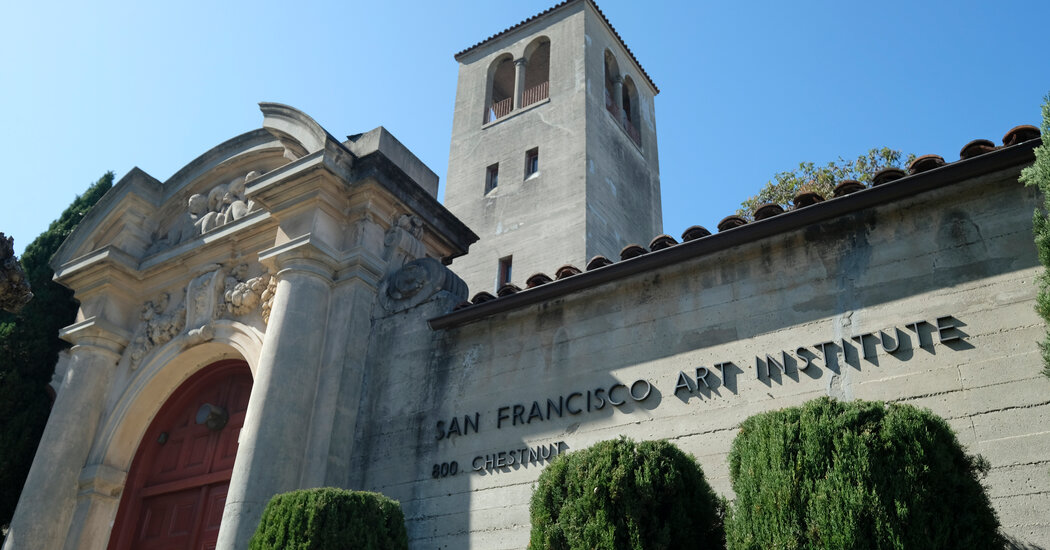 Pam Rorke Levy has resigned from her position as chairwoman of the San Francisco Art Institute, a 150-year-old college that has struggled over the last year to emerge from a multimillion-dollar debt and declining enrollment despite its history of training artists likes of Kehinde Wiley, Catherine Opie and Annie Leibovitz.

“I feel I can step back,” Ms. Levy said in a statement Thursday in which she expressed optimism that debt restructuring and new leadership would mean that “S.F.A.I. has the runway to rebuild itself.”

Her departure comes amid criticism over discussions of the sale of a Diego Rivera mural worth $50 million that would have given the S.F.A.I. a way to close its budget gap but now seems to be on hold because of a move to give it landmark status.

The financial pressures had motivated the Board of Regents of the University of California to step in last fall to help by buying the institute’s $19.7 million of debt from a private bank, an effort designed to prevent a public sale of the school’s Chestnut Street campus and its art collection.

The institute is cooperating with an audit of its finances by the state attorney general’s office, which is reviewing the last seven years of the institute’s operations.

The chairwoman, whose six-year term expired last summer, had stayed on “to support S.F.A.I. through the additional challenges caused by the pandemic,” she said in the statement. She has defended her efforts, saying she has acted to save the school and that she was taking necessary steps in keeping one of the last remaining colleges on the West Coast exclusively dedicated to contemporary art in operation.

“Like other small colleges and arts institutions across our country, we face formidable challenges,” she wrote earlier this month in a statement to the San Francisco legislators who voted to initiate landmark designation of the Rivera mural to block any potential sale, against the school’s objections. “As fiduciaries of S.F.A.I., the trustees are obligated to consider and pursue all options for putting our assets to work — including the mural.”

But critics say that the board’s efforts to manage its financial crisis may have put the school’s future in jeopardy. One of them has objected to a decision at a Dec. 17 board meeting at which trustees voted to spend $1.5 million from restricted endowment funds — which the current board chairman says they understood to be a bridge loan, which would eventually be paid back.

John Sanger, a trustee emeritus and retired lawyer, cautioned during the board meeting that, under state law, the school needed approval from the donors of the funds or the California Attorney General’s office before it could spend restricted funds for a purpose outside that designated by the donors.

“I have seen their numbers and they have a giant hole in their budget,” Mr. Loughlin, an artist and nonpracticing lawyer, said. “There are students paying tuition right now to a school that has projected it could run out of money by April.”

According to Ms. Levy, the school’s legal counsel advised that the board’s decision on the restricted funds did not require the approval of donors or the state’s attorney general.

One expert in nonprofit law said otherwise. Douglas M. Mancino, the former chairman of a committee with the American Bar Association focused on issues affecting tax-exempt organizations, described the use of restricted endowment funds in this case as “unusual and very problematic.”

“Using funds that are donor-restricted for something other than their intended purpose would be a breach of fiduciary duty,” Mr. Mancino said. “You could probably get a court to eventually rule on the issue, but it’s a process you would have to go through. You can’t just unilaterally use those funds without approval.”

According to the Institute’s new chairman, Lonnie Graham, a photographer, the board had re-examined its use of the restricted funds earlier this week, and voted to secure a new loan providing more than $7 million to help S.F.A.I. survive the fiscal year and restore endowment funds.

“I want to make sure the school has a future,” said Mr. Graham. “We are trying, we are really trying. But we are not trying to do anything illegal.”