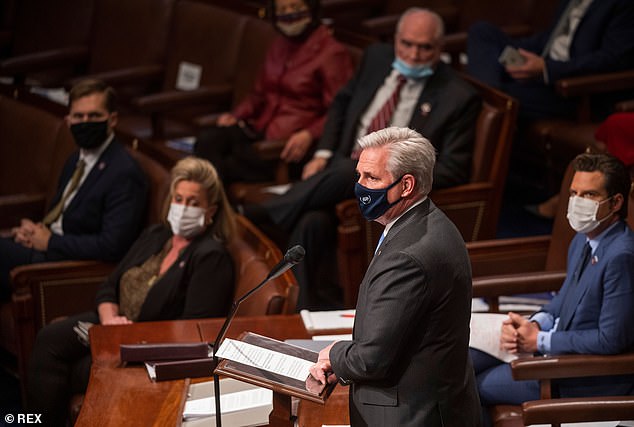 Punchbowl News reported the scene Friday, writing that McCarthy had demanded Trump release a statement denouncing the rioters. And at first, Trump refused.

McCarthy also wanted the president to do more to get in control of the situation than send out a tweet.

House Minority Leader Kevin McCarthy, the body’s top Republican, got in a screaming fight with President Donald Trump Wednesday as a pro-Trump mob broke into the Capitol Building 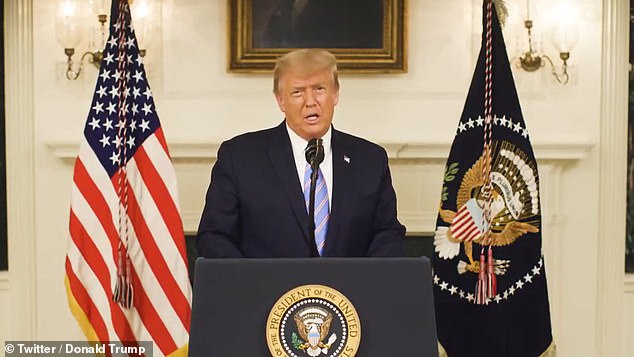 McCarthy, according to Punchbowl News, wanted Trump (pictured) to issue more than just tweets to tame the situation. Trump tweeted several times and then finally released a video. On Thursday, he released another video where he appeared to concede 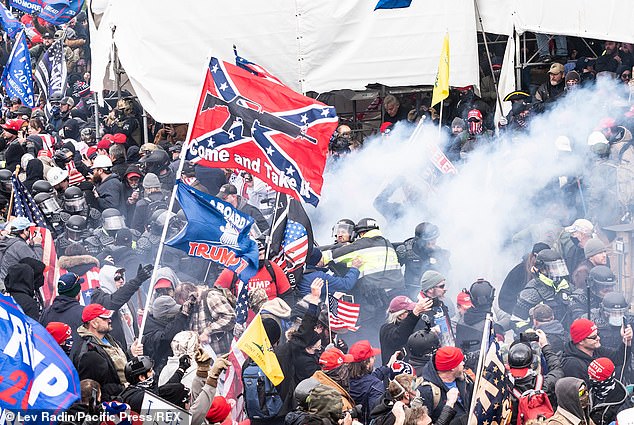 Trump had misled his supporters into believing Congress had the ability to overturn the results of the presidential election. Lawmakers were meeting to certify the Electoral College votes when the MAGA mob overwhelmed Capitol Hill

Trump had misled his supporters into believing Congress had the ability to overturn the results of the presidential election.

Earlier in the day, the president had appeared at a rally at the ellipse and encouraged his supporters to march on the Hill.

Five people died in the incident, including a Capitol Hill Police officer.

McCarthy has long been one of the president’s top allies on Capitol Hill – and went on to vote twice to approve challenges to Arizona’s and Pennsylvania’s Electoral College vote counts.

As the events were unfolding, Trump sent out tweets including, ‘Please support our Capitol Police and Law Enforcement. They are truly on the side of our Country. Stay peaceful!’

But he also tried to explain the protesters actions by continuing to claim that he had been robbed of a second term. Trump has claimed for months that widespread voter fraud prevented him from winning the election, which is false.

‘These are the things and events that happen when a sacred landslide election victory is so unceremoniously & viciously stripped away from great patriots who have been badly & unfairly treated for so long,’ Trump said in a tweet Twitter removed from its site. ‘Go home with love & in peace. Remember this day forever!’

The president also eventually released a video Wednesday – where he continued to make baseless fraud claims.

On Thursday, White House press secretary Kayleigh McEnany came out to the podium to read a statement condemning the violence.

Trump followed up with a video address in which he finally appeared to concede the presidential race to President-elect Joe Biden.

The screaming match between McCarthy and Trump indicates who damaged the relationship is between the president and top Republican leaders on the Hill.

In the House, especially, they’ve remained loyal, with both McCarthy and his No. 2, Rep. Steve Scalise, voting in favor of Electoral College challenges.

A majority of House Republicans sided with Trump in those votes, even after the riots.

On the Senate side, Senate Majority Leader Mitch McConnell has already broken free.

He went on the Senate floor Wednesday – even before the mob broke into the Capitol Building – and shamed lawmakers like Sen. Josh Hawley who planned to sign on to House Republicans’ Electoral College objections.

Punchbowl reported that McConnell is ‘basically done’ with Trump.