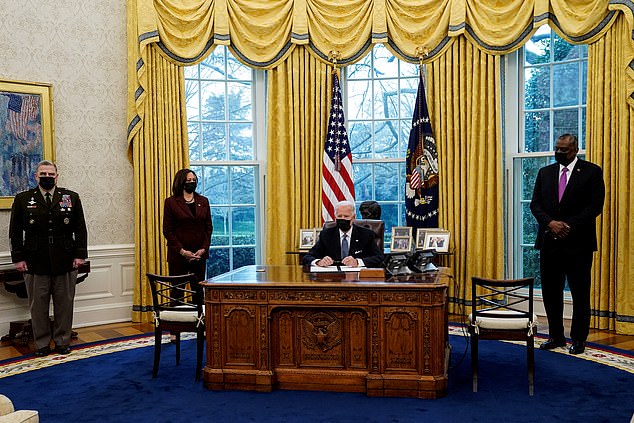 President Joe Biden reversed Donald Trump‘s ban on transgender people serving in the military Monday when he signed an executive order stating ‘all Americans who are qualified to serve in the Armed Forces of the United States should be able to serve.’

‘This is reinstating a position that previous commanders as well as the secretaries have supported and what I’m doing is letting all qualified Americans to serve the country in uniform,’ he said in the Oval Office Monday before signing the order.

‘Transgender personnel, if qualified in every other way, can serve their government in the United States military,’ he noted.

Biden signed the order as met with new Defense Secretary Lloyd Austin in the Oval Office at the White House ahead of Austin’s ceremonial swearing-in. Austin is the first African American to serve as the top Pentagon chief.

Also taking part in the occasion was Chairman of the Joint Chiefs of Staff General Mark Milley, in a sign that the military is united behind the new president.

But not all Republicans are on board. Republican Senator John Cornyn of Texas, a member of the GOP leadership, questioned Biden’s commitment to unity with the order.

‘Another “unifying” move by the new Administration?,’ he tweeted.

‘President Biden believes that gender identity should not be a bar to military service, and that America’s strength is found in its diversity,’ the White House said Monday in a fact sheet about Biden’s decision.

The executive order specifically notes ‘transgender servicemembers will no longer be subject to the possibility of discharge or separation on the basis of gender identity.’ 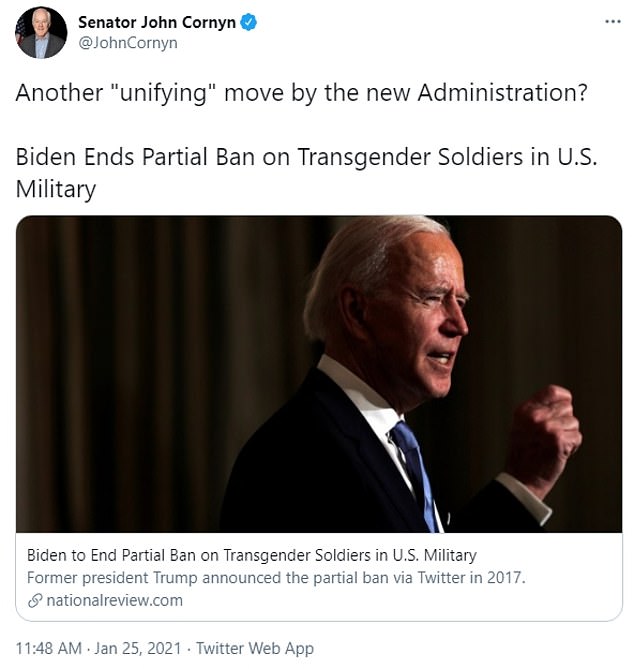 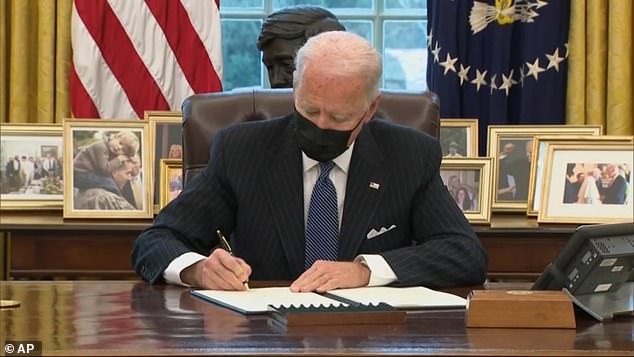 White House Press Secretary Jen Psaki had said the ban would be lifted in the early days of the administration. LGBTQ activists called the policy cruel.

It was announced by President Trump via Twitter in July 2017. The ban specifically blocks individuals who have been diagnosed with gender dysphoria from being recruited, with limited exceptions.

It also specifies that individuals without the condition can serve, but only if they do so according to the sex they were assigned at birth.

It did not affect anyone who was serving and recognized as transgender, but affected new recruits and also said that currently serving troops who started to transition would be discharged.

It is unknown how many new recruits were rejected, or how many were not recruited. In 2019 the Washington Blade reported that all branches of the military said they had discharged zero service members and the Coast Guard said it had rejected two recruits.

In 2016, a Department of Defense study found that enabling transgender individuals to serve openly in the United States military would have only a minimal impact on military readiness and healthcare costs.

The study also concluded that open transgender service has had no significant impact on operational effectiveness or unit cohesion in foreign militaries. 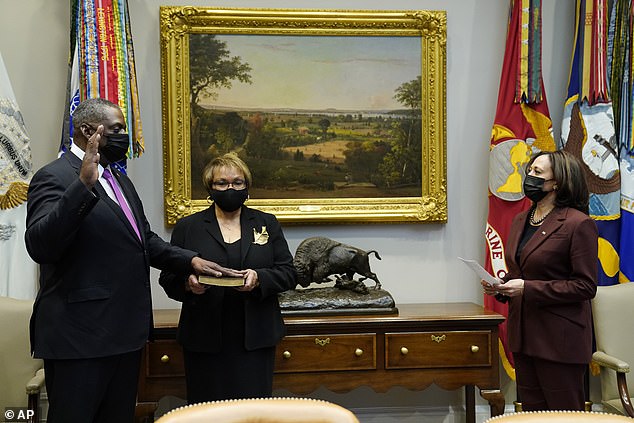 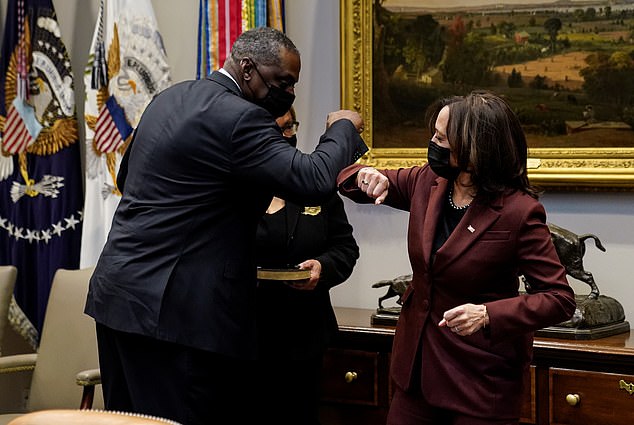 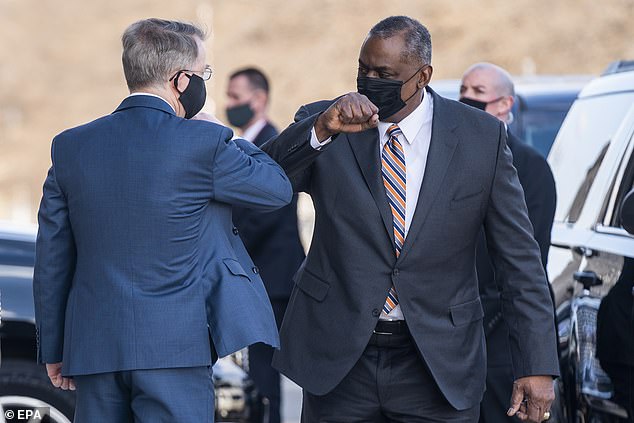 President Biden met with his new Defense Secretary Lloyd Austin on Monday, above Austin arrives for his first day on the job at the Pentagon on January 22

In March last year, a 10-year Navy officer sued as a Jane Doe saying she faced involuntary discharge for being diagnosed with gender dysphoria. She was given a waiver to continue her service and her treatment in May.

Austin said at his Senate confirmation hearing last week that he supported repealing the ban.

‘I support the president’s plan or plan to overturn the ban,’ he said on Tuesday. ‘I truly believe … that if you’re fit and you’re qualified to serve and you can maintain the standards, you should be allowed to serve. And, you can expect that I will support that throughout.’

The move to overturn the transgender ban is also the latest example of Biden using executive authority in his first days as president to dismantle Trump’s legacy, on key issues which Trump had made the center of his appeal.

His early actions include orders to overturn a Trump administration ban on travelers from several predominantly Muslim countries, stop construction of the wall at the U.S.-Mexico border, and launch an initiative to advance racial equity.

Republicans critical of Biden are likely to add reversing the Pentagon’s transgender ban to the list of orders Biden has signed which will please the left, including another measure on transgender equality which will prevent school ‘bathroom bans’ and prevent transgender athletes from being told to compete in their birth sex.

Biden is also scheduled to hold a ceremonial swearing-in ceremony on Monday at the White House for Austin, who became the nation’s first Black defense secretary.

It was unclear how quickly the Pentagon can put a new policy in effect, and whether it will take some time to work out details.

Until a few years ago service members could be discharged from the military for being transgender, but that changed during the Obama administration.

In 2016, Defense Secretary Ash Carter announced that transgender people already serving in the military would be allowed to serve openly.

And the military set July 1, 2017, as the date when transgender individuals would be allowed to enlist.

After Trump took office, however, his administration delayed the enlistment date and called for additional study to determine if allowing transgender individuals to serve would affect military readiness or effectiveness.

A few weeks later, Trump caught military leaders by surprise, tweeting that the government wouldn’t accept or allow transgender individuals to serve ‘in any capacity’ in the military. ‘Our military must be focused on decisive and overwhelming victory and cannot be burdened with the tremendous medical costs and disruption that transgender in the military would entail,’ he wrote.

It took nearly two years, but after a lengthy and complicated legal battle and additional reviews, the Defense Department in April 2019 approved the new policy that fell short of an all-out ban but barred transgender troops and military recruits from transitioning to another sex and required most individuals to serve in their birth gender. 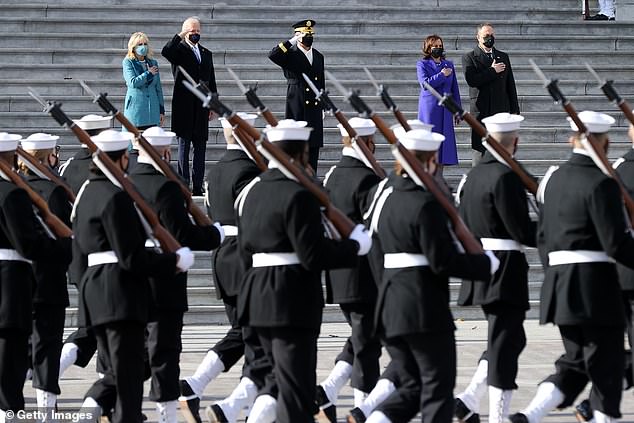 Under that policy, currently serving transgender troops and anyone who had signed an enlistment contract before the effective date could continue with plans for hormone treatments and gender transition if they had been diagnosed with gender dysphoria.

But after that date, no one with gender dysphoria who was taking hormones or has transitioned to another gender was allowed to enlist.

Troops that were already serving and were diagnosed with gender dysphoria were required to serve in their birth gender and were barred from taking hormones or getting transition surgery.

Under the Trump policy, a service member can be discharged based on a diagnosis of gender dysphoria if he or she is ‘unable or unwilling to adhere to all applicable standards, including the standards associated with his or her biological sex, or seeks transition to another gender.’

And it said troops must be formally counseled and given a chance to change their decision before the discharge is finalized.

According to the Pentagon, the department spent about $8 million on transgender care between 2016 and 2019. The military’s annual health care budget tops $50 billion.

All four service chiefs told Congress in 2018 that they had seen no discipline, morale or unit readiness problems with transgender troops serving openly in the military. But they also acknowledged that some commanders were spending a lot of time with transgender individuals who were working through medical requirements and other transition issues.