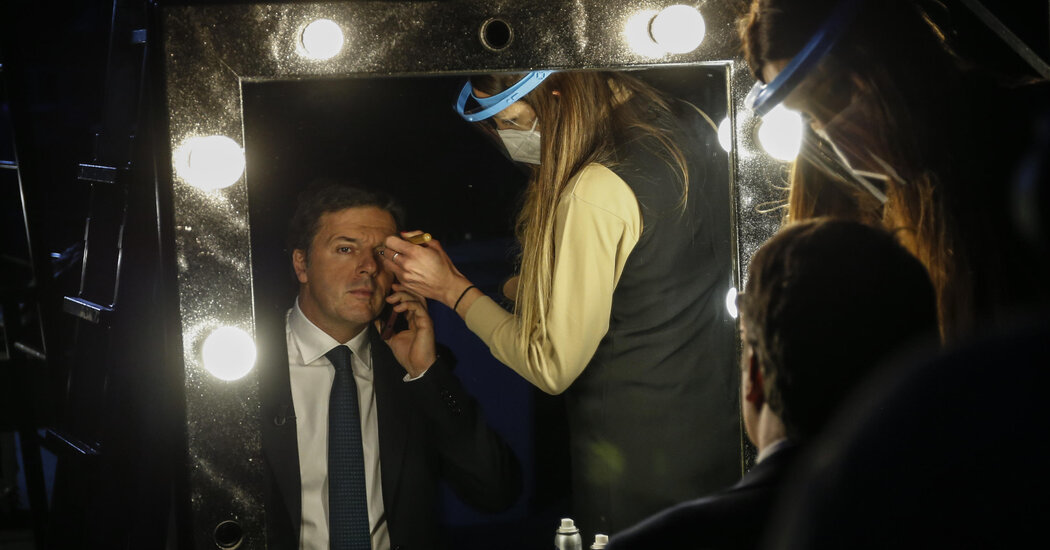 ROME — The Italian government survived a near-collapse amid a pandemic and economic crisis on Tuesday as Prime Minister Giuseppe Conte cobbled together just enough support to win a confidence vote in Parliament and temporarily stave off an unexpected attack by the country’s premier political operator.

But instead of ending the political upheaval that erupted last week as Italy’s vaccine rollout got underway and its cities returned to lockdown, Tuesday’s vote in the Senate could mark the start of weeks of frantic politicking to resolve a standoff between Mr. Conte and his nemesis, former prime minister Matteo Renzi.

Senators voted 156 in favor of the government and 140 against, with 16 abstentions. That left Mr. Conte in a weak position, his wobbly government still alive but five votes short of having the support of an absolute majority in the 321-seat Senate.

Mr. Renzi had plunged Italy into the crisis last week by threatening to withdraw his small, but critical, support from the government unless he got — well, no one is quite sure what exactly. Depending on whom you ask, he was operating in the national interest, out of pandemic-induced lunacy, or, as most believed, out of an insatiable hunger for power, the limelight, and Count of Monte Cristo-level vengeance on the populists who plotted his fall from power five years ago.

In a Tuesday night speech making his case on the Senate floor, Mr. Renzi said his motivation was the government’s incompetence and arrogance, and its failure to manage the coronavirus, protect the economy, send students back to school and seize a once-in-a-generation chance to rebuild the country with billions of euros from Europe.

“It’s not enough to say how great we were and that everything is going to be OK,” he said, making clear his disdain for Mr. Conte, who he said changed his colors to stay in power and should have stepped down. “This is the moment. Now or never.”

While Mr. Renzi’s endgame remained mysterious, his gambit and irrepressible embrace of intrigue raised substantive questions about Italy’s governance in its worst emergency since World War II. It revealed stunning reversals, horse-trading and a deeply embedded tradition of lawmakers ditching their parties for influence.

The showdown has highlighted Mr. Conte’s own transformation from a Trump-courting leader of a nationalist, immigrant-demonizing and European Union-berating government, to a Biden-welcoming courter of what he called “Europe’s best and most noble traditions — liberal, popular and socialist.” That happened to describe some of the lawmakers he was wooing to replace Mr. Renzi’s support.

Tuesday’s vote did not offer the clarity that many Italians had hoped for. For starters, Mr. Renzi’s center-left group, in a move that some considered an olive branch to Mr. Conte, abstained from the vote, making it easier for Mr. Conte to reach a majority and survive.

But the government was left teetering and could still collapse. If it does, Mr. Conte could yet return as prime minister, for the third consecutive government. There could also be a technocratic government with a limited mandate of vaccinating the country and managing more than 200 billion euros in aid from Brussels.

Essentially no one supporting the current government, including Mr. Renzi, wants early elections, as they would likely benefit the right-wing nationalist leader Matteo Salvini. It was Mr. Renzi who had outmaneuvered Mr. Salvini in the last governing crisis just 17 months ago, locking him into the opposition by putting together the current government between the populist Five Star Movement and the center-left Democratic Party.

Mr. Conte essentially owed his job to Mr. Renzi’s previous support. But this month showed that what the wily Mr. Renzi giveth, he taketh away.

In speeches before Parliament this week, Mr. Conte clearly felt burned. He said Mr. Renzi, whom he did not deign to name, had unnecessarily provoked a “crisis that happens in a crucial phase for our country, when the pandemic is still underway.” His sin was too egregious to be forgiven. “We cannot cancel what happened,” he said.

Mr. Renzi’s support among Italians, once widespread, is down to about two percent. But while he no longer derives power from popularity, he now enjoys the flexibility of having little to lose.

“He is never clear or transparent,” said Carlo Calenda, a former minister in Mr. Renzi’s government. “It is difficult to understand what he wants at the very end.”

But even Mr. Renzi’s detractors in the Democratic Party grudgingly conceded that his critique of Mr. Conte had merit, though they criticized him for taking his grievances public and using them as political cover for his personal ambitions.

Mr. Renzi argued that Mr. Conte had circumvented Italy’s institutions by ruling through undemocratic decrees and task forces. Parliament, and the government, existed for a reason, he said, and Mr. Conte was both grossly incompetent and outsourcing Italy’s future to nameless technocrats.

He said the populist ideology of Five Star had led Mr. Conte to reject bailouts from the European Union to improve Italy’s health system. He suggested the awful toll of the virus in Italy, with more than 80,000 deaths, an economy in shambles and a confusing patchwork of lockdowns had exposed Mr. Conte’s dangerous ineptitude.

Polls show that as few as 13 percent of Italians believe Mr. Renzi is acting in the national interest. Mr. Conte is far more popular, with more than 50 percent approval.

Mr. Renzi had already leveraged his ransom-like control over the government to change government policy. In recent weeks, he helped force the government to move significant funds from Italy’s more than 200 billion euro share of the European Union’s post-pandemic recovery fund toward health care and incentives for hiring young people.

Mr. Renzi came to power in 2014 as a “demolition man,” seeking to rejuvenate Italy with liberal social and market reforms. But in 2016, with a migrant crisis and growing right-wing populist movements buffeting Europe, he gambled and lost on a constitutional reform that he treated as a referendum on himself.

When Five Star scored gains in a 2018 election, it needed a coalition partner to form a government, but Mr. Renzi would not allow his Democratic Party to join forces with the populists. Instead, Five Star formed a governing alliance with the League party led by Mr. Salvini, and selected Mr. Conte, a little-known lawyer, as prime minister. Critics called him their puppet.

The next year, Mr. Salvini overreached, pulled out of the government and called for new elections, hoping to take power. Seizing his opportunity, Mr. Renzi reversed himself and forged an alliance between the Democratic Party and Five Star, preventing elections and banishing Mr. Salvini to the sidelines.

Mr. Renzi then bolted his party and created a new one, with just enough loyalists in Parliament to deprive the new government a majority. The move gave him outsized power with practically no public support.

His constant scheming exasperated the country’s voters — as he acknowledged in a 2019 interview — and the politician once seen as Italy’s greatest hope became increasingly loathed. Even his supporters said that he was squandering his significant legacy.

His gambit this month has forced Mr. Conte, who is less practiced in politics, and Five Star to publicly abandon claims of purity to stay in power.

Five Star used to disparage lawmakers who left their parties and traded their votes for influence, turning Parliament into a “cattle market.” Now, as Five Star appealed to those very lawmakers, it renamed them the “the responsible ones.”

Mr. Conte’s government needed to peel away Mr. Renzi’s own loyalists, find support among a grab bag of unaffiliated lawmakers or, remarkably, woo followers of Silvio Berlusconi — whom Five Star has in the past called a “dwarf,” a “traitor” and a mobster.

If Mr. Conte can’t piece together a solid majority, he may ultimately resign, prompting a government collapse and his replacement. Or he could return to Mr. Renzi, hat in hand, and offer even more influence to a politician who has described himself as Machiavellian.

On Tuesday night, Mr. Renzi said that if Mr. Conte managed to get enough support to keep governing, he should get busy, ideally in ways Mr. Renzi approved of.

“But hurry up,” he said. “Because you do not have time to lose.”

Like Loading...
Facebook
Twitter
Pinterest
WhatsApp
Previous articleAfter Prison Case Ends With out Prices, Conor McGregor Is Sued in Eire
Next articleN.Y.C. will run out of its present vaccine provide on Thursday, the mayor says. It’s not scheduled to get extra till subsequent week.

WASHINGTON — Defense Secretary Lloyd J. Austin III has ordered a high-level review of an initial military investigation into an attack on a...
Read more
WORLD

Japan said on Tuesday that it had decided to gradually release tons of treated wastewater from the ruined Fukushima Daiichi nuclear plant into...
Read more