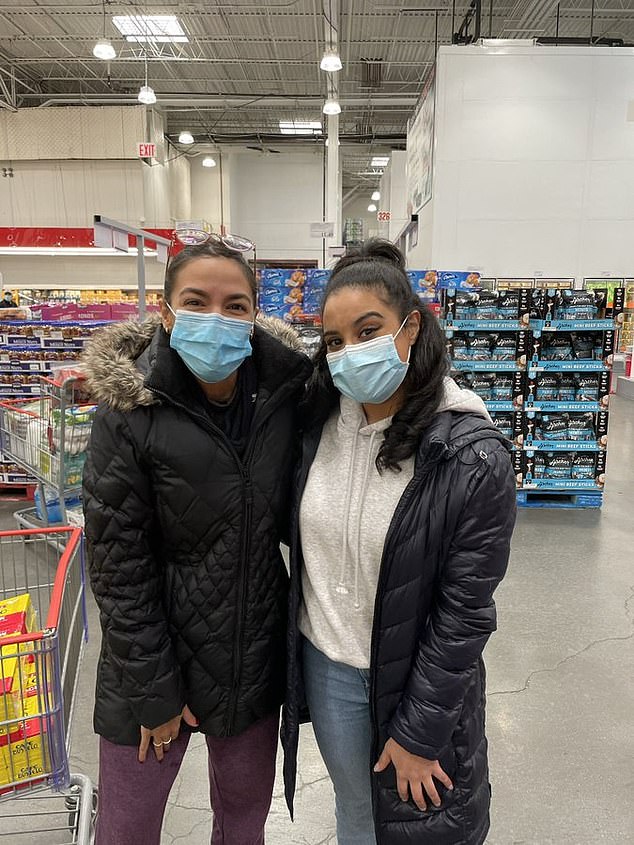 A worker strike at the Hunts Point Market has been going on in New York City borough for four days, hamstringing the distribution of produce across the region.

The employees, members of Teamsters Local 202, are looking for a $1 dollar hourly raise, as well as some gratitude after working day in and day out during the pandemic.

AOC lent her support to the strike on Wednesday, going to Costco to buy some hot chocolate and supplies for the workers. 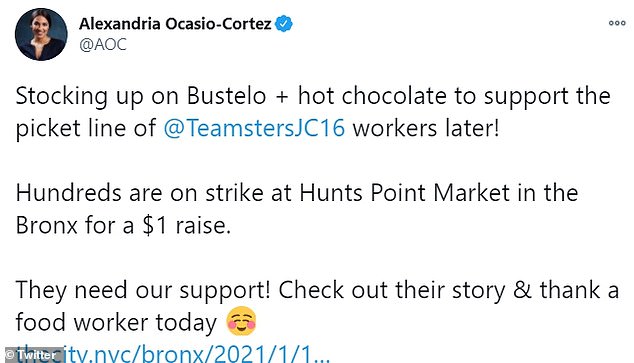 She reposted a photo of herself at Costco on Twitter, writing: ‘Stocking up on Bustelo + hot chocolate to support the picket line of @TeamstersJC16 workers later! Hundreds are on strike at Hunts Point Market in the Bronx for a $1 raise. They need our support! Check out their story & thank a food worker today.’

Ocasio-Cortez might one of the most prominent politicians to support the strikers, but she isn’t the only one, according to The City.

Others who have shown up in support of Teamsters Local 202 since the strike began include mayoral candidates Maya Wiley and Andrew Yang.

‘We’re not asking for very much, and if they would have gave that, then all of this right here could have been prevented,’ warehouse worker Ismael Cancela told The City. 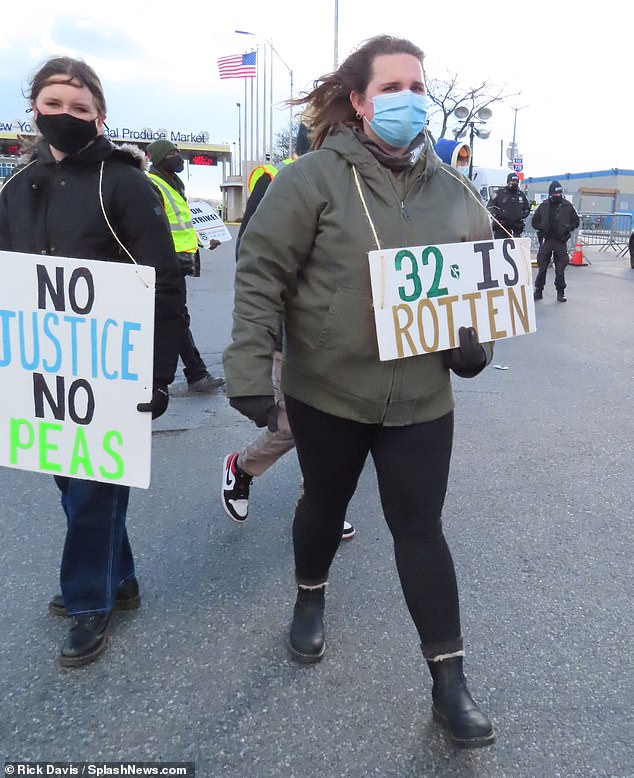 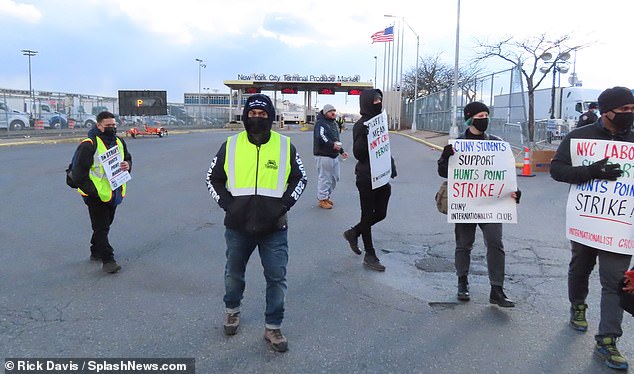 The workers are demanding a raise of $1 an hour, which management has not agreed to 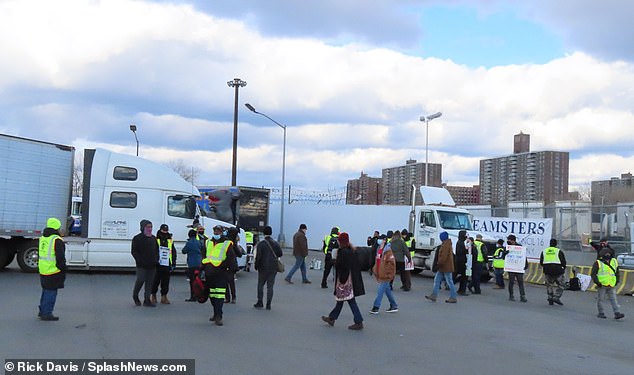 Workers at the Hunts Point Market, which supplies around 60 percent of New York City’s produce and handles 210 million pounds of produce each year, earn an average of $18 to $21 an hour.

They sought an increase of $1 an hour in negotiations, but they were countered with just a 32-cent raise, leading to the strike beginning after midnight on Sunday, the first at Hunts Point Market in 35 years.

Gothamist reports that 1,400 workers walked off the job once the strike began, which came several days after negotiations with the management of the market broke down. 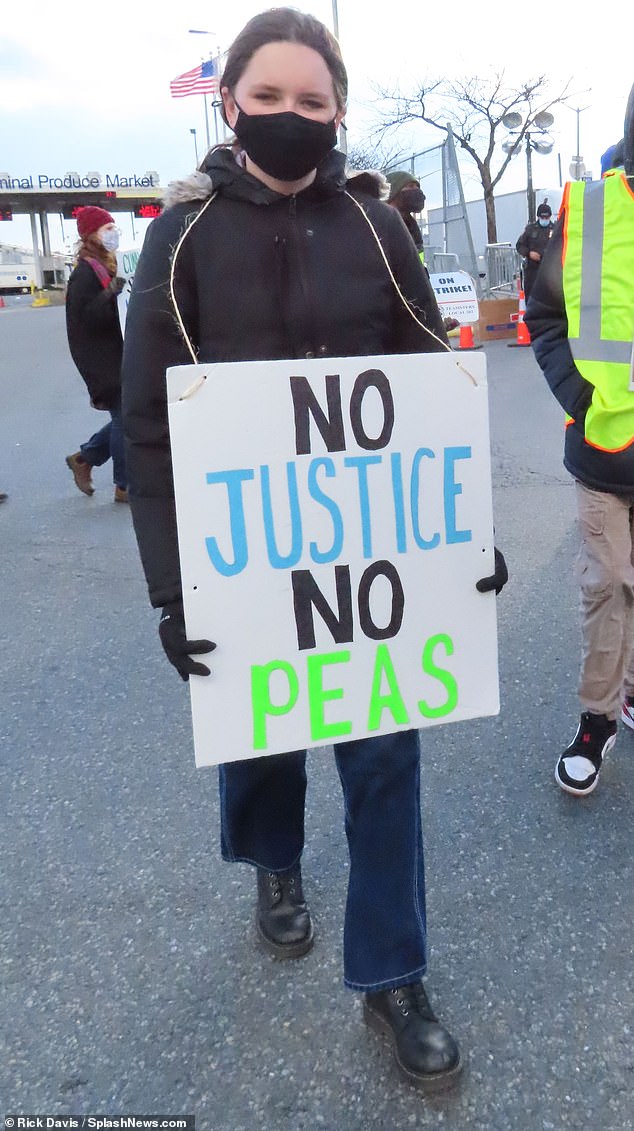 One protester holds a clever sign, reading, ‘No Justice, No Peas,’ as it’s a produce market 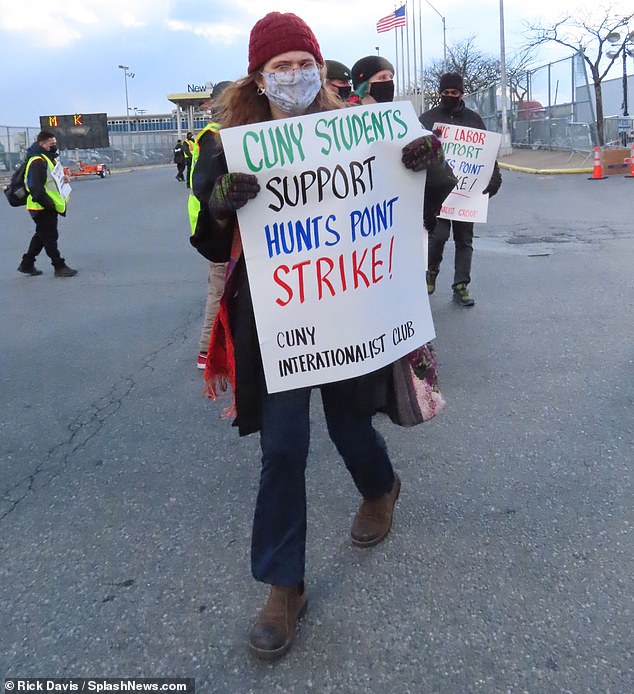 The protesters have garnered plenty of support, including from local colleges 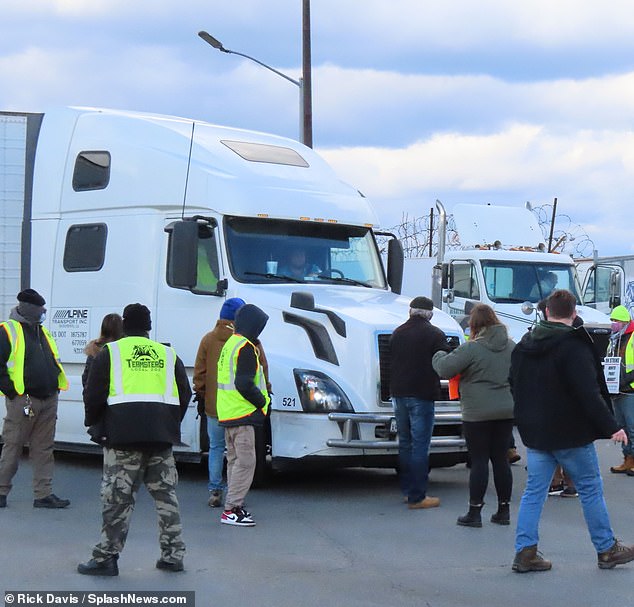 In addition to a bigger raise, employees at the market are seeking more respect from management and the community they serve.

‘Don’t say we should be lucky to have a job,’ Hiram Montalvo told The City; Montalvo unloads trucks at the market. ‘Say thank you that we’re actually coming to work and risking our lives so that they can take care of their families as well.’

Tuesday night marked the most tense evening of the strike so far, with 400 workers being confronted on the picket line by around 300 police officers, leading to five arrests.

Police have reportedly been present at the strike since it began. 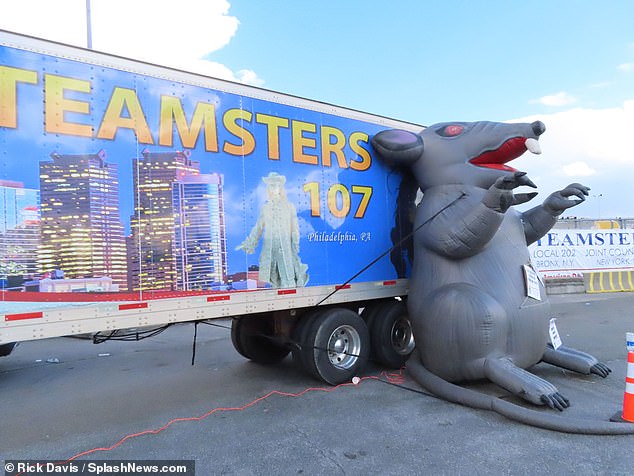 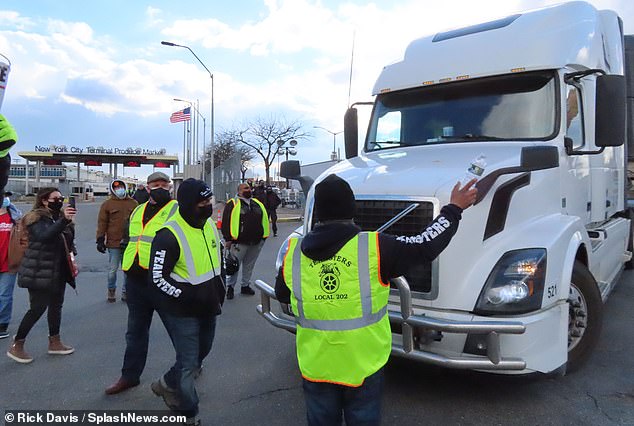 If the strike persists, the distribution of local produce will be affected in a severe way 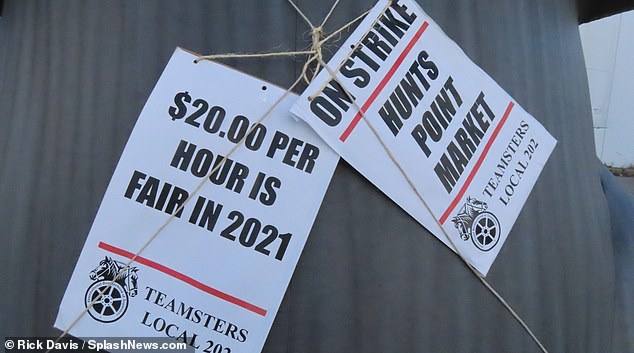 ‘Our battle’s not with the NYPD, but we think they could handle this more delicately. Let’s put it that way,’ said Local 202 President Daniel Kane Jr.

Union officials say ten employees at the market have lost their lives during the coronavirus pandemic, further galvanizing the Teamsters.

‘I am sick and tired of working people begging for crumbs,’ said city council member Vanessa Gibson. ‘One dollar should be the floor.’

If the strike continues, produce will start drying up at grocery stores in the coming days and weeks.