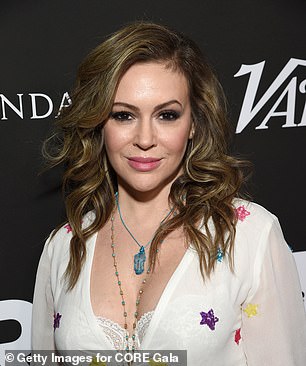 Actors Alyssa Milano and Dave Bautista are among those urging people to sign an online petition that calls for Republican Sen. Ted Cruz to be expelled from the US Senate.

The week-old petition posted on MoveOn is addressed to the US Senate and seeks to ‘Expel Ted Cruz’ for reasons including alleged treason, conspiracy to incite armed insurrection in Washington, DC, undermining rule of law, a coup attempt and sedition.

Cruz has been the target of fierce criticism in the weeks following the Presidential Election for his role in perpetuating the baseless claim that President-Elect Joe Biden‘s win had been the result of organized, wide-scale voter fraud and other voting irregularities. 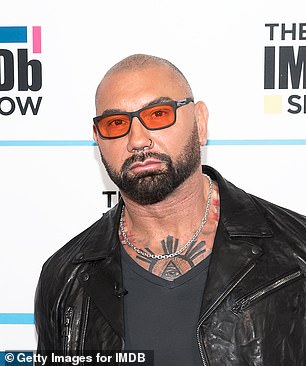 Alyssa Milano (left) and David Bautista (right) have added their support to a petition seeking to expel Sen. Ted Cruz from the Senate based on alleged treason and other claims 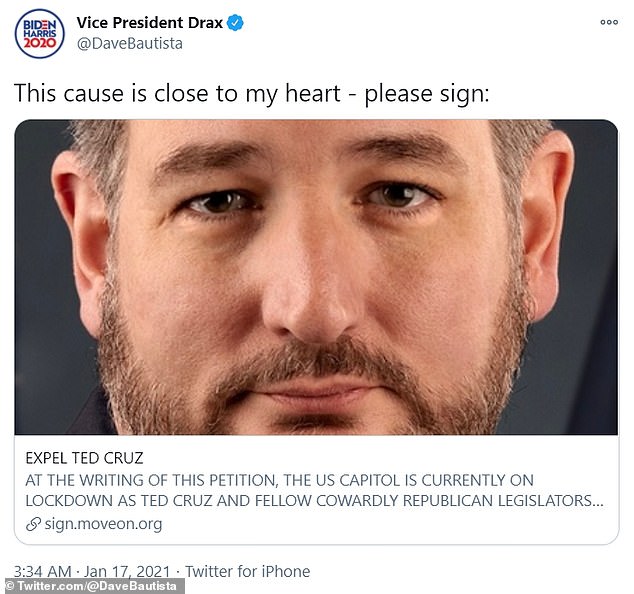 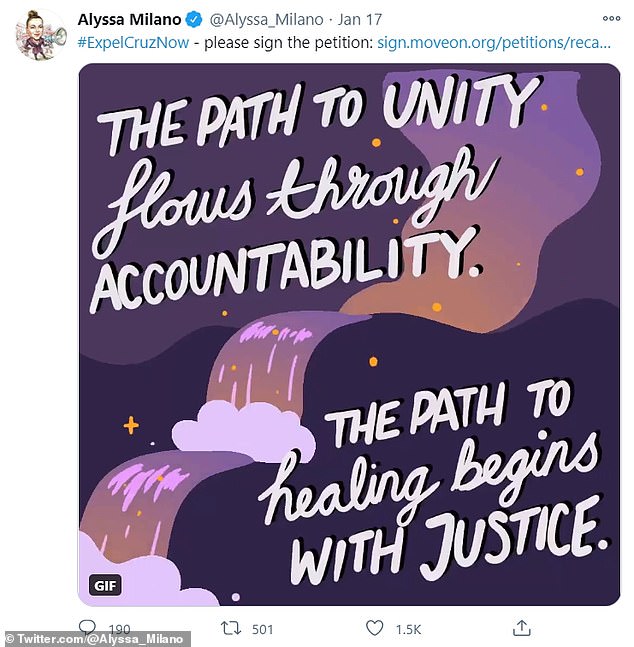 Bautista – a retired pro-wrestler – shared the petition Sunday via Twitter, which has 1.4million followers, using the message: ‘This cause is close to my heart – please sign.’

Milano, an outspoken political activist, also shared a link to the petition in a tweet Sunday.

In her tweet, she wrote ‘#ExpelCruzNow – please sign the petition’ and included a GIF that read, ‘The path to unity flows through accountability. The path to healing begins with justice.’

Actress Lea Thompson and author Don Winslow are also among the famous names who tweeted out the petition over the weekend, using the same language as Bautista in their tweets.

Cruz was among the list of congressmen who voted against certifying the electoral college votes on January 6 – the day that rioters broke into the Capitol Building, an incident that lead to five people dying and dozens being arrested and facing a variety of federal charges. 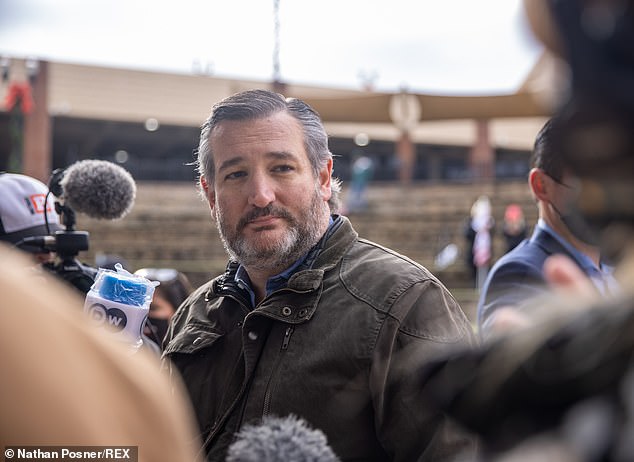 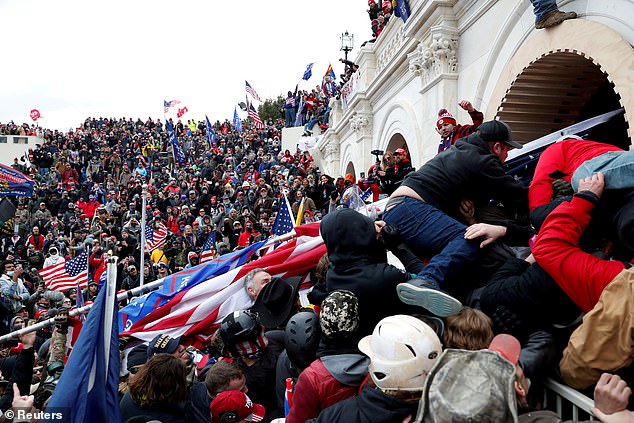 Pro-Trump protesters storm into the Capitol to contest the certification of the 2020 U.S. presidential election results by Congress on January 6

His staunch objection to certifying the election for Biden – in addition to supposedly sending out a fundraising letter in the midst of the riot – his critics say, helped incite the Capitol building attack.

The January 6 riot began after Trump gave an hour-long speech to supporters as part of his protest over Congress certifying the Biden’s election victory. Following the speech, rioters swarmed the Capitol building, breaking windows and entering lawmakers’ offices.

Videos and photos from the riot showed people walking off with signs and rifling through lawmakers’ papers.

One video captured by the New Yorker shows rioters on the Senate floor. A man can be seen going through a binder of papers and heard saying: ‘There’s gotta be something in here we can fucking use against these scumbags.’ At one point, he stops on a page and says, ‘This is a good one, him and Hawley or whatever. Hawley, Cruz.’

As he does this, another man can be heard saying: ‘I think Cruz would want us to do this… So I think we’re good.’

Cruz’s spokesperson told the Daily Beast in a statement that: ‘As Sen. Cruz has said repeatedly, the terrorist attack on the Capitol was reprehensible, and the criminals who carried out the attack should be fully prosecuted. He has been clear, consistent, and unequivocal: violence is always wrong—whether from Left or Right—and violent criminals should go to jail for a very long time.’

In defense of his position against not certifying Biden’s election results, Cruz denied having anything to do with the riots, telling KXAS that ‘What I was doing is debating on the floor of the Senate election integrity.’

He added, ‘That has nothing to do with this criminal terrorist assault, which was wrong and needs to be prosecuted. It’s exactly the opposite. What I was doing is how you’re supposed to resolve issues in this country.’

In addition to Cruz, Republican Sen. Josh Hawley – who was photographed raising a first in support of the rioters – is also being targeted for expulsion from the Senate.

Hawley was among the group of Republican Senators who objected to certifying the electoral college votes for Biden, even after the Capitol was seized.

Supporters of Cruz and Hawley’s expulsion from the Senate are using Section 3 of the 14th Amendment as part of their reasoning.

The relevant portion of the amendment reads: ‘No person shall be a Senator or Representative in Congress, or elector of President and Vice-President, or hold any office, civil or military, under the United States, or under any state, who, having previously taken an oath, as a member of Congress, or as an officer of the United States, or as a member of any State legislature, or as an executive or judicial officer of any State, to support the Constitution of the United States, shall have engaged in insurrection or rebellion against the same, or given aid or comfort to the enemies thereof. But Congress may by a vote of two-thirds of each House, remove such disability.’

West Virginia Sen. Joe Manchin, a Democrat, said Friday that his colleagues should consider expelling both Cruz and Hawley for their alleged roles in inciting the January 6 riot under the amendment.

‘That should be a consideration,’ Manchin said on Firing Line with Margaret Hoover, adding that what Cruz had done ‘was totally outside of the realm of our responsibilities or our privileges.’

Manchin noted that he believed decisions to object to the certification of Biden’s electoral college vote had been ‘done because of political reasons.’

‘I believe that all my colleagues truly made a decision that was politically best for them and expedient for them. It was not what they believed to be true or false,’ Manchin said.