13 New Books to Watch For in February 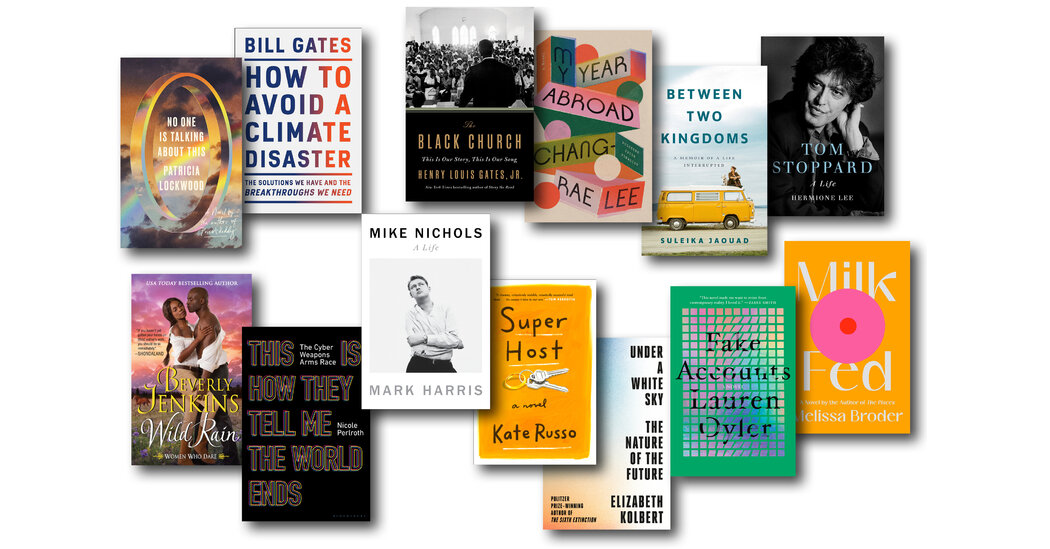 ‘Between Two Kingdoms: A Memoir of a Life Interrupted,’ by Suleika Jaouad (Random House, Feb. 9)

Soon after graduating from college, Jaouad received an alarming diagnosis: Her unexplained rashes and fatigue were the result of an aggressive type of leukemia. Jaouad documented much of her chemotherapy and treatment in a column for The Times, and her book reflects on life after remission. A cross-country trip allowed her to meet people who had written to her during treatment — and figure out what kind of life she wanted to lead.

Gates interweaves his own childhood experiences with more than 400 years of history to analyze how Christianity, and the community of Black churches, helped create a culture that subverted centuries of oppression. “We need only look at the brilliant use of the church in all of its forms — from W.E.B. Du Bois’s triptych of ‘the Preacher, the Music, and the Frenzy’ to the use of the building itself — to see the revolutionary potential and practice of Black Christianity in forging social change,” Gates writes. “There is no question that the Black Church is one of the parents of the civil rights movement, and today’s Black Lives Matter movement is one of its heirs.”

Shortly before Donald Trump’s inauguration, the narrator of Oyler’s debut novel discovers her boyfriend is an online conspiracy theorist, which eventually frees her to leave New York and move to Berlin. Oyler uses the premise to explore how social media has reshaped not only intimate relationships but also the idea of individual identity and selfhood.

‘How to Avoid a Climate Disaster: The Solutions We Have and the Breakthroughs We Need,’ by Bill Gates (Knopf, Feb. 16)

This book arrives at a critical moment: 2020 was one of the hottest years on record, California had its worst fire season, a record number of storms formed and made landfall in the United States, among plenty of other reasons for alarm. Gates outlines how, using a combination of science and technology, humans can bring greenhouse gas emissions per year to zero.

Nichols had a singular career: He directed four consecutive hit plays, made his film directing debut with “Who’s Afraid of Virginia Woolf?” and followed it with “The Graduate,” and amassed critical and commercial success almost instantly. Harris, a longtime entertainment reporter, did hundreds of interviews, talking to Meryl Streep, Glenn Close, Stephen Sondheim and other luminaries for a cleareyed — if not always generous — account.

This new novel, from the author of “The Pisces,” explores hunger in all its permutations through the eyes of Rachel, a young employee at a Los Angeles talent agency, who begins a romance with a woman who works at the frozen yogurt shop she frequents. As their relationship deepens, so does Rachel’s capacity for nourishment and pleasure, bodily and spiritually.

The life of Tiller, a young man in New Jersey, is changed once he meets Pong, a charismatic Chinese-American businessman who has made a fortune. Together, they travel across Asia, ginning up excitement for a health elixir that Pong believes will be his next success. But this novel, from the author of “On Such a Full Sea,” is more than a high-octane picaresque: It’s also an examination of cultural identity and belonging.

‘No One Is Talking About This,’ by Patricia Lockwood (Riverhead, Feb. 16)

“Can a dog be twins?” That post brought the unnamed narrator of Lockwood’s first novel modest fame in the portal — Lockwood’s stand-in for the internet. The narrator is, arguably, too online, spending hours and hours in a mix of memes, outrage and absurdity. Midway through the story, an urgent family crisis pulls the narrator out of the stream of the internet and firmly back into “real life,” raising questions about whether online exposure fundamentally rewires how we live.

Bennett, the middle-aged artist at the heart of this novel set in West London, seems to be foundering: His professional prospects are dwindling, his wife has left him and resettled in the United States, and his precarious finances have forced him to move into a studio in his back garden and list his house on a site for vacation rentals. His guests — four women over the course of the story — offer him a chance to reawaken parts of himself that had fallen dormant.

‘This Is How They Tell Me the World Ends: The Cyberweapons Arms Race,’ by Nicole Perlroth (Bloomsbury, Feb. 9)

Perlroth, a cybersecurity reporter for The Times, dives into the shadowy and frightening world of cyberwarfare. Hackers have infiltrated American infrastructure (nuclear plants, power grids) and corporations to devastating effect, but why do these attacks continue to happen? Perlroth gives a fast-paced account of the U.S. government’s digital vulnerability, how it has been exploited and why the stakes couldn’t be higher.

Lee is among the most acclaimed biographers working now, known for her previous books about Virginia Woolf, Penelope Fitzgerald and others, and here she offers an authoritative biography of the renowned playwright. Born in Czechoslovakia to Jewish parents, Stoppard and his family left suddenly for Singapore before the arrival of the Nazis, moved to India and finally settled in England after his mother remarried. Stoppard didn’t know much of his family story until late in life, when he discovered all four of his grandparents were Jewish, and Lee explores his artistic motivations as well as analyzing his work. As the character of Oscar Wilde says in “The Invention of Love,” one of Stoppard’s most celebrated plays, “Biography is the mesh through which our real life escapes.”

‘Under a White Sky: The Nature of the Future,’ by Elizabeth Kolbert (Crown, Feb. 9)

Kolbert sounded the alarm about man-made ecological disaster in her earlier book “The Sixth Extinction,” which won the Pulitzer Prize. Now, she investigates whether any of our efforts can save the planet, after generations of damage. There are only a few comparable examples of destruction in the earth’s history, Kolbert writes — “the most recent being the asteroid impact that ended the reign of the dinosaurs, 66 million years ago.”

In post-Civil War Wyoming, a female rancher becomes romantically entwined with a reporter for a Black newspaper sent out West on assignment. This book is the second in Jenkins’s best-selling Women Who Dare series.