10 New Books We Advocate This Week 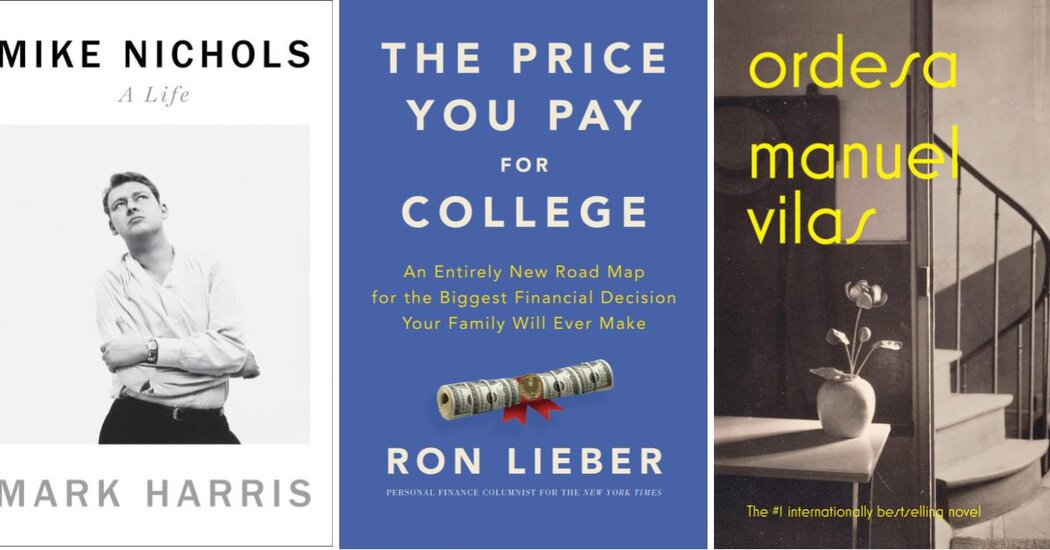 THE PRICE YOU PAY FOR COLLEGE: An Entirely New Road Map for the Biggest Financial Decision Your Family Will Ever Make, by Ron Lieber. (Harper/HarperCollins, $27.99.) A comprehensive guide to the trying process of paying for higher education, Lieber’s book explains in detail how to save money, apply for aid and bargain with colleges, all while carefully acknowledging the sometimes conflicting perspectives of the parties involved. “Understood as a self-help book, ‘The Price You Pay for College’ represents an extraordinary achievement,” Daniel Markovits writes in his review. “It is comprehensive and detailed without being tedious, practical without being banal, impeccably well judged and unusually rigorous. But the main title hints at a sensibility deeper than friendly advice.”

ORDESA, by Manuel Vilas. Translated by Andrea Rosenberg. (Riverhead, $28.) This meditation on midlife yearning and solitude is many other things: autofiction, something between a novel and poetry, a collage of memories and ancestry, a treatise on a changing country. The Spanish writer Vilas plumbs emotional depths, but with a light touch. “Despite the melancholy at its heart, this is ultimately a book of light — of sunlight streaming through Manuel’s ghost-filled apartment, of magical summer holidays in a place called Ordesa in the foothills of the Pyrenees, of the lost paradise of his parents in the flush of youth,” Anderson Tepper writes in his review. “‘Ordesa’ does, indeed, feel skittish and fragmentary, and that’s also part of its charm.”

THAT OLD COUNTRY MUSIC: Stories, by Kevin Barry. (Doubleday, $23.95.) Optimism and sorrow anchor the stories in this collection, where relationships take unexpected turns and characters befuddle one another and themselves. Barry’s writing sparkles, as ever, moving speedily between pathos and humor to great effect. “The first two stories in the book feature most of Barry’s emotional interests: yearning, hope, self-loathing, other-loathing, maybe just a dash more of hope, heartache, resignation,” John Williams writes in his review. “It’s a classically Irish palette, balancing the turfy and the moony.”

RELIGION AND THE RISE OF CAPITALISM, by Benjamin M. Friedman. (Knopf, $37.50.) In this prodigiously researched and enlightening book, Friedman argues that if we are to understand the American capitalist system and modern economics, we have to look for their roots in early Protestant theology. Alan Wolfe, reviewing it, praises the depth of Friedman’s analysis: “He covers not only the main thinkers in both economics and theology, but also the less-well-known ones who helped shape their thought. He can credibly discuss the philosophy of John Locke and the science of Isaac Newton. As one reads Friedman, words like ‘magisterial,’ ‘masterpiece’ and ‘magnificent’ floated through my thoughts.”

BEGINNERS: The Joy and Transformative Power of Lifelong Learning, by Tom Vanderbilt. (Knopf, $26.95.) Jealous of all the new skills his child is learning, Vanderbilt decides to see what he is capable of picking up as an adult. Trying to gain some proficiency in chess, singing, surfing, juggling and drawing teaches him a lot about the process of acquiring new knowledge when your brain is not so flexible anymore. “As we spent most of 2020 increasingly cut off from the outside world, turning more and more to the easy diversion of the digital to compensate for the persistent sting of loss, ‘Beginners,’ which documents a time before the pandemic arrived, unintentionally provides a primer of sorts for re-engaging with life,” Cal Newport writes in his review.